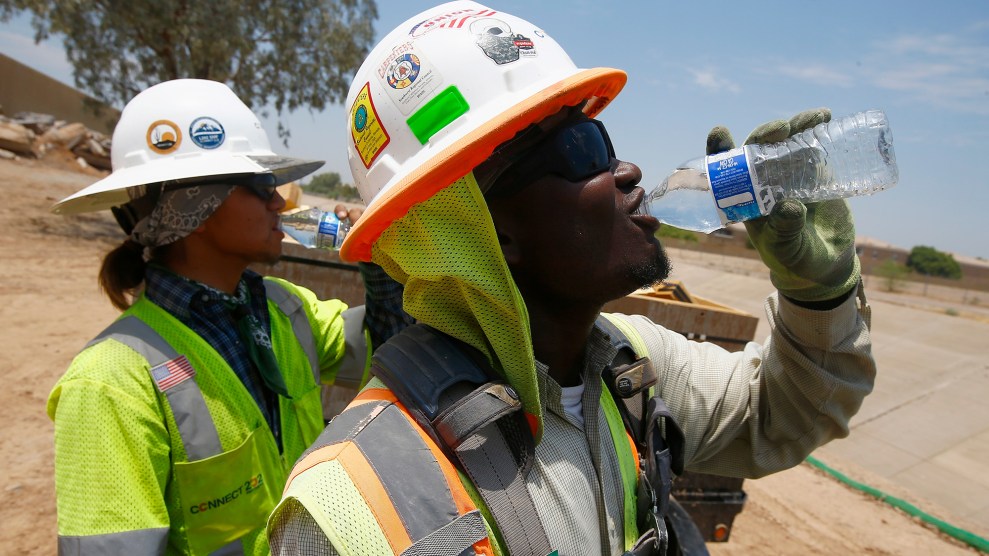 Phoenix summers are always harsh, as these workers, shot in 2017, can attest. This week, they downright dangerous.

The ferocious heatwave that is gripping much of the US south and west has highlighted an uncomfortable, ominous trend—people are continuing to flock to the cities that risk becoming unlivable due to the climate crisis.

Some of the fastest-growing cities in the US are among those being roasted by record temperatures that are baking more than 100 million Americans under some sort of extreme heat warning. More than a dozen wildfires are engulfing areas from Texas to California and Alaska, with electricity blackouts feared for places where the grid is coming under severe strain.

San Antonio, Texas, which added more to its population than any other US city in the 12 months ending July 2021, has already had more than a dozen days over 100F this summer and hit 104F on Tuesday. Phoenix, second on the population growth rankings compiled by the US census, also hit 104F on Tuesday and has suffered a record number of heat-related deaths this year. Meanwhile, Fort Worth, Texas, third on the population growth list, has a “red flag” warning in place amid temperatures that have reached 109F this week.

Cities that stretch across the “sun belt” of the southern and southwestern US have in recent years enjoyed population booms, with people lured by the promise of cheap yet expansive properties, warm winters and plentiful jobs, with several large corporations shifting their bases to states with low taxes and cheaper cost of living.

“We are seeing places run out of water, no proper subdivision controls to ensure there are enough trees… and lots of low-density suburbs full of cars.”

But this growth is now clashing with the reality of the climate emergency, with parts of the sun belt enduring the worst drought in more than 1,000 years, record wildfires and punishing heat that is triggering a range of medical conditions, as well as excess deaths.

“There’s been this tremendous amount of growth and it’s come with a cost,” said Jesse Keenan, an expert in climate adaption at Tulane University. Keenan pointed out that since the 1990s several states have gutted housing regulations to spur development that has now left several cities, such as in Scottsdale, Arizona, struggling to secure enough water to survive.

“The deregulation is really catching up with communities and they are paying that price today,” Keenan said. “We are seeing places run out of water, no proper subdivision controls to ensure there are enough trees to help lower the heat, and lots of low-density suburbs full of cars that create air pollution that only gets worse in hot weather. We’ve reached a crunch point.”

The sprawl of concrete for new housing, mostly within unspooling suburbs rather than contained in dense, walkable neighborhoods, has helped heighten temperatures in many of these growing cities. The spread of hard surfaces has also led to flash flooding, as Houston found to its cost during the devastating Hurricane Harvey in 2017.

Some cities have attempted to respond to the rising temperatures by planting trees, which help cool the surrounding area, and provide emergency centers where people can cool down, but these efforts are often piecemeal and underfunded, according to Sara Meerow, an expert in urban planning at Arizona State University.

“The extreme heat that cities are experiencing now is caused by a combination of climate change and the urban heat island effect,” Meerow said. “Rapid urban expansion, which means more impervious surfaces like roads and buildings and waste heat from cars and buildings, typically exacerbates the urban heat island effect, which means these cities are even hotter.”

As the US, like the rest of the world, continues to heat up, the climate crisis should become more of a factor when choosing a place to live, with retirees already starting to shun Arizona, traditionally a favored spot for older transplants, according to Keenan.

“We are looking at increased premature mortality, even increased diabetes because of dehydration, cardiac impacts and so on,” he said. “Mortgage lenders are starting to look at the risks of lending for somewhere that doesn’t have a water supply, as that’s not a good investment. Capital markets are getting wise to this stuff.”

“We are seeing the limits to growth and housing affordability and the impacts of poor-quality decision making of where and how to build,” he added. “We are paying the price for all that now.”