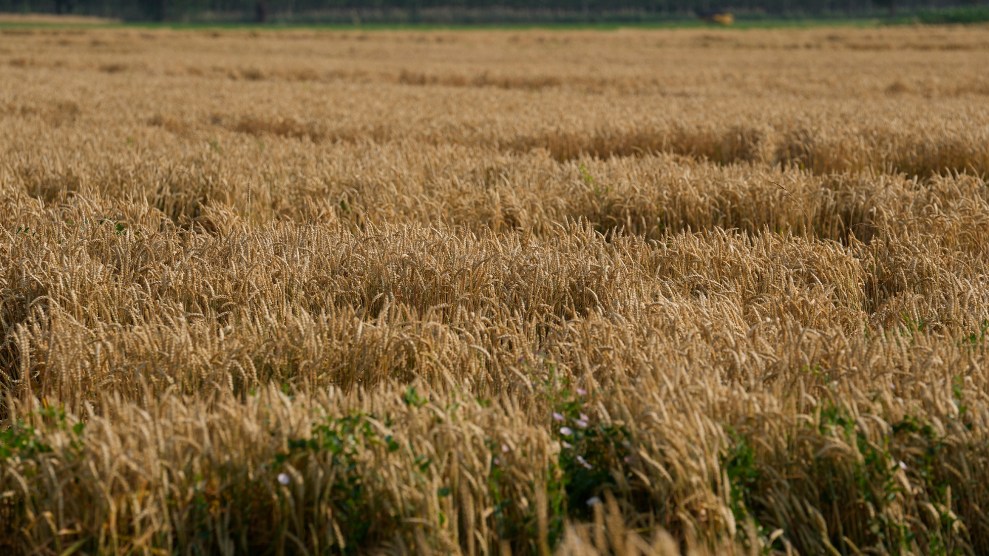 A wheat field in Guastalla, Italy, which is facing a severe drought in addition to searing summer temperatures.Luca Bruno/AP

Vicious heat waves are sweeping parts of the globe this week, along with the dangers that come with blazing-hot temperatures: wildfires, dehydration, and even death. The hot weather could also push prices up for food, making inflation even worse.

Western Europe is facing sweltering temperatures again this week, with the thermostat hovering around 110 degrees in Seville in southern Spain. More than 20 wildfires are burning in Spain and Portugal, and persistent drought has left rivers and reservoirs running so low that they’re exposing ancient artifacts.

In Italy, the hot and dry conditions are expected to destroy a third of the seasonal harvest of rice, corn, and animal fodder — at a minimum. Locusts have descended on the island of Sardinia in the worst invasion in three decades, hurting the production of hay and alfalfa. The European Commission recently downgraded its soft-wheat harvest estimates from 130 million tons to 125 million tons—more bad news amid a food shortage precipitated by Russia’s blockade on exports from Ukraine. (Russia and Ukraine are among the world’s biggest exporters of grain.)

Across the world in China, a record-breaking heat wave is causing major problems. Roofs are melting, residents are relocating to public cooling zones in underground air-raid shelters, and health workers are strapping frozen food to their too-hot hazmat suits. The Central Meteorological Observatory in Tokyo has warned that the heat could further hurt the production of corn and soy, worsening inflation. These crops are used to feed pigs, and early-season failures have already sent the price of pork, China’s staple meat, soaring.

Drought, high temperatures, and a locust invasion last year in the Great Plains, nearly doubled the price of wheat.

When major crops wither, it can have knock-on effects across the ocean and show up on your grocery bill. Inflation has been climbing in the United States at the highest rate in 40 years, up 9.1 percent over the past 12 months, much of it the result of spiking food and energy prices. The surge has been egged on by the pandemic-beleaguered supply chain and by Russia’s invasion of Ukraine. But climate change is becoming a driver of inflation, too. Experts are warning that heat, flooding, drought, wildfires, and other disasters have been wreaking economic havoc, with worse to come.

“If we wish to control inflation, we must address climate change now,” David A. Super, a professor of law and economics at Georgetown, recently argued in The Hill. Beyond crops, the changing climate has driven up the price of lumber as well as insurance premiums.

“Heatflation” might already have something to do with escalating food costs around the world. A heat wave in India this spring devastated wheat plants, leading it to ban exports. In the United States last year, searing heat and drought in the Great Plains scorched the wheat crop and also enabled wheat-munching grasshopper populations to flourish. The grain’s price nearly doubled to $10.17 a bushel, its highest level since 2008. Extreme temperatures endanger livestock, too: The heat wave that struck much of the country last month caused thousands of cattle to die of heat stress in Kansas.

“We all know our grocery bills are going up,” Bob Keefe, the author of the book Climatenomics, told me last month. “Part of the reason is that when you lose crops to storms or drought or flooding, prices are going to go up.”

In a report last year, researchers at the European Central Bank examined the evidence that abnormal temperatures can drive inflation. Looking at seasonal temperatures and price indicators in 48 countries, they found that hot summers had “by far the largest and longest-lasting impact” on food prices. The effect lasted almost a year and was especially noticeable in developing countries. “We find that higher temperatures over recent decades have played a non-negligible role in driving price developments,” the authors concluded.

While climate action and economic concerns are often pitted against one another, the evidence is piling up that in many cases, they are one and the same.