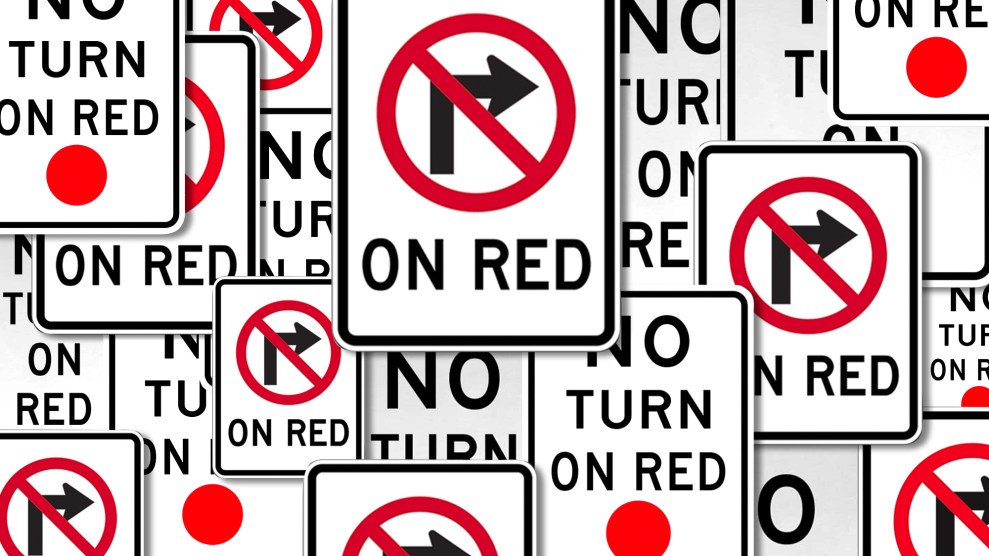 It’s an obsolete relic of the 1970s oil crisis. It’s dangerous to pedestrians. And, if you drive a car in the United States, you likely do it every day. It’s time to get rid of right-turn-on-red.

If you roll up to a red light in a car in Europe, you have to wait for the light to turn green before taking a right—unless the posted signage says otherwise. In Great Britain, where drivers use the left side of the road, left turns on red are not permitted. But in the United States, drivers are generally permitted to turn right at a red light, if there’s a big enough gap in the traffic for them to squeeze into. In fact, you’re likely to get honked at if you don’t do it.

That freedom sounds like a good way to keep traffic moving. Still, sometimes drivers fail to yield to pedestrians who have the right of way in the intersection. The data on right-turn-on-red crashes might be scarce, but the existing studies suggest that these types of collisions—while rare—frequently involve a pedestrian or cyclist. Cars, instead of hitting other cars, often hit humans. Now, there’s a growing movement for cities to do away with the traffic law altogether.

Last week, the Washington, DC, city council voted to ban right-turn-on-red (RTOR) at most city intersections (and to allow cyclists to treat stop signs as yield signs). If Mayor Muriel Bowser signs on and the bill receives Congressional approval, DC will become the second US city after New York not to allow RTOR. DC, which has struggled to curb traffic fatalities, hopes that ending RTOR will make its streets safer for cyclists, pedestrians, and wheelchair users.

So, why do US cities allow RTOR in the first place? Blame the oil crisis.

A provision of the 1975 Energy Policy and Conservation Act said that, in order for states to receive federal assistance for mandated conservation programs, they had to enact “a traffic law or regulation which, to the maximum extent practicable consistent with safety, permits the operator of a motor vehicle to turn such vehicle right at a red stop light after stopping.” The reasoning was that RTOR would lower emissions by decreasing the amount of time that drivers spent idling at red lights.

Most states quickly fell in line. Still, some municipalities had to be forced. According to a 1978 Washington Post report, Arkansas Sen. Dale Bumpers, who pushed for the gas-saving measure, asked Congress to “withhold $400,500 in federal energy funds” from Washington, DC, until the city adopted the policy. At a hearing, Bumpers had “voiced irritation” about having to stop during his commute from Bethesda, Maryland, into DC. Rather than enduring a budget cut that would have required the firing of 25 DC Transportation Department employees, the city permitted RTOR. By 1980, RTOR was the law of the land nationally, except in New York City.

But transportation engineer Bill Schultheiss tells me that RTOR isn’t as efficient as 1970s lawmakers would have you believe. “The savings in emissions and travel times has always been wildly overstated because it never assessed the reality that most of these drivers are immediately stopped at a signal on the cross street or stuck in traffic in urban areas,” he said in an email. “The total trip of the user was never part of the assessment.”

Take into account the growing number of hybrid and electric cars, and RTOR makes even less sense. Schultheiss says that electric cars are actually likely to increase the number of RTOR crashes “because their acceleration rates are dramatically quicker than gas powered vehicles.”

Several local news segments about the DC RTOR legislation amplified the voices of people with no expertise in traffic safety who complained that the bill would increase traffic.

“That is a reasonable first impression,” Schultheiss says, “but people don’t think about how RTOR works in reality.” In situations where “cross streets have lots of traffic gaps and long traffic signal cycle lengths” and it’s easy to turn on red, the problem is “improper signal timing on the corridor.” In that case, a better way to speed up traffic would be to shorten the lengths of traffic signal cycles on the cross streets.

In one local news segment where a reporter asked people on the street their thoughts on the end of RTOR, a man in a wheelchair said that he became disabled—and his brother and sister were killed—when a car ran a red light. The video then cuts to a shot of the reporter breezily whizzing down the sidewalk on a scooter, followed by an interview with a man bemoaning the fines that the city plans to impose on motorists who violate the RTOR rule.

SAY GOODBYE TO TURNING RIGHT ON RED🚦The nation’s capital is one step closer to new changes on the road. DC Council voted unanimously to more forward with a new law that would make turning right on red illegal.

Critics of the DC bill have pointed out the lack of data showing the dangers of RTOR, but many people who don’t use cars know instinctively how dangerous turning vehicles can be. “Our current safety studies fail to capture the reality of the constant near misses and confrontations that result between these motorists and pedestrians which can be observed daily just by observing a typical busy intersection with RTOR,” Schultheiss says.

Ending RTOR is a minor enough inconvenience for drivers that it’s unlikely to convince many of them to opt for other forms of transportation, but it is “a baby step in creating an urban environment that is more supportive of walking, bicycling and transit,” Schultheiss says. “The only path forward to reducing auto-dependence and the resulting traffic congestion is for our society to decide to shift our subsidy model from sprawl and highways to transit and housing.”