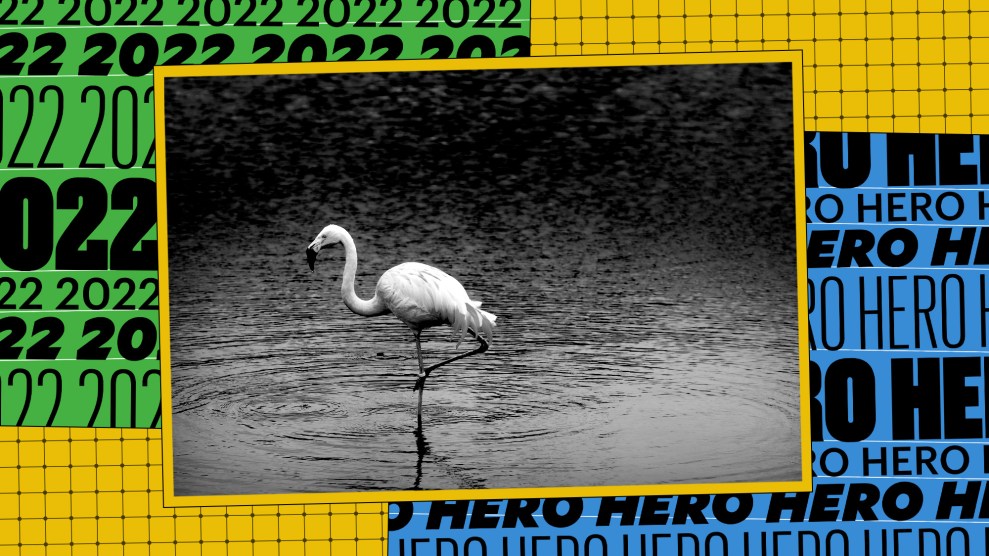 For Pink Floyd the flamingo, July 4, 2005, was an Independence Day to remember. Shortly before the holiday, the five-ish-foot tall African flamingo broke out of its enclosure at the Sedgwick County Zoo in Wichita, Kansas. Keepers at the zoo had made a critical oversight: They forgot to clip Floyd’s feathers, a regular, painless, procedure that temporarily inhibits birds’ ability to fly. So Floyd made a break for it. Officials hoping to recapture the flamingo tracked it to a drainage canal on the western side of the city. But as day turned to evening, a storm hit. And Floyd escaped.

In the words of the bird’s namesake, that Fourth of July was, truly, a Great Day for Freedom.

And, it turns out, Floyd has been living free as a…well, bird, ever since. In March this year, it was spotted in Texas, in the salty wetlands near Port Lavaca—about 700 miles South and nearly 17 years after making its getaway.

An angler named David Foreman reported the sighting. “My brain was telling me, ‘No way you’re looking at a flamingo,’ but my eyes were telling me, ‘That’s what it is, there’s no mistaking it,’” Foreman told the New York Times. While lookalike-species roseate spoonbills are common in coastal Texas, Foreman knew that flamingos aren’t native to the state, a fact he frequently conveyed to customers on his fishing trips. “It’s almost like nature’s way of putting me in my place,” Foreman said. “Mr. Knows-Everything thinks there’s no flamingos in Texas? Have a look at this.”

According to Julie Hagen, an information specialist for the Coastal Fisheries Division of Texas Parks and Wildlife, the escapee is a frequent flier in Texas. Floyd, a name selected by Hagen, can be identified by the tag on its leg—No. 492. It’s a number the bird received upon arrival at the Kansas zoo from Tanzania in 2003, the Times reports, one of 40 flamingos to arrive that year. Floyd has reportedly been seen in Texas as early as 2006, and in many years since. While Hagen didn’t have an update on Floyd’s whereabouts since Foreman’s sighting in March, she said it’s common for Texas wildlife officials to observe Floyd during the state’s annual bird survey in May.

“He’s still out there,” she told me. “Maybe we’ll see him again.” (She later clarified that officials aren’t sure of Floyd’s gender.)

And with any luck, maybe Floyd won’t be flying solo. While flamingos are rare in the United States, Floyd has, on occasion, found something of a flock: Shortly after Floyd’s escape in 2005, for instance, the bird was joined in Texas by a Caribbean flamingo that scientists speculated may have been displaced by a tropical storm. It’s unclear whether the birds were mates or platonic companions, but the pair reportedly split around 2013. (Unfortunately, this was at least the second time Floyd lost a friend. During its initial escape in 2005, Floyd—formerly known just as No. 492—was joined by an accomplice, flamingo No. 347. No. 347 was last seen in Michigan in August 2005, but likely did not survive the winter.)

The good news is, Floyd may have time to find another partner in crime. Scientists estimate the bird is in its 20s, and flamingos are known to have lived several more decades than that. So it’s possible that Floyd’s adventure on the outside is only just beginning. On behalf of those among us who are still looking for love and warmer climates, I say, keep flapping, buddy.

Pink Floyd has returned from the dark side of the moon.

The flamingo escaped from a Kansas zoo in 2005 and is often spotted on the #TexasCoast.