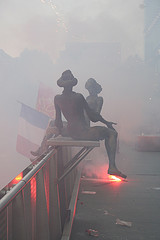 The London Evening Standard just published a harrowing report detailing the large-scale, violent fuel protests going on right now all over the world. In more than a few countries, shortages have all but halted the national economies as fishermen, grocers, farmers and truck drivers either refuse or find themselves unable to do their jobs.

You can read about it, but it’s the photos that are really sobering: thousands of trucks blockading the road to the Thai capital city of Bangkok; protestors kicking a riot policeman; a lone injured farmer kneeling, arms outstretched, before a line of riot police. In Spain, where things seem particularly bad, a working truck driver narrowly escaped attempts by his striking peers to burn him alive in his cab; in Portugal, farmers say they will have to throw away over half a million gallons of fresh milk because there is no more fuel and no more storage.

This is not happening here in the US. Yes, gas prices are high, and they’re disproportionately affecting our country’s rural poor. And yes, our leaders continue to suggest startlingly short-sighted solutions. But so far, people seem to have decided to grin and bear it.

Why no riots? I’m not saying truck-burning is the way to go. But the national forbearance that’s attended this year’s jump in prices is a little unnerving. Even those suffering rural Southerners don’t seem angry; just sad and mostly resigned. Have we lost so much faith in our government that we won’t even bother demanding action? Or are we just not sure what to demand?

In this case, actually, I think that just registering our anger would be enough. The European and Asian protesters, by voluntarily halting work, are trying to make a point to their governments: that high fuel prices are unsustainable, and that if something doesn’t change it won’t even be possible for people to continue working. So far, those protests don’t seem connected to a call for alternative fuels or transportation networks, but logically those things are the next step. What if people started demanding that the government make a real investment?

Photo used under a Creative Commons license from quarsan.