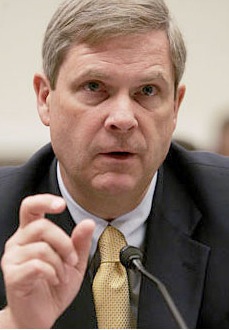 It is easy to groan at the selection of former Iowa Governor Tom Vilsack as Barack Obama’s Secretary of Agriculture. Ezra Klein over at the Prospect notes that the pick signals two important things that are sure to disappoint food policy reformers. (1) Politicians from agricultural states are enmeshed in the politics of farm subsidies, and Iowa, as the number one corn-producing state in the country, can likely count on a continued flow of poisonous corn subsidies under Vilsack. (2) USDA will continue to be a department for food producers instead of one for food consumers, meaning that food policy decisions will be made with the needs of agribusiness first and the needs of low-income kids with little access to healthy food options second. (If you don’t know why those two things are at odds, you haven’t been listening to Michael Pollan.) It is because a conventional pick like Vilsack likely means the continuation of policies that harm both eaters and small farmers that food activists were passing around a petition to get a reformer the job. Alas, it didn’t happen.

But before we throw our foodie/organic-only/locavore selves into complete despair, let’s take a closer look at Vilsack. For a former governor of a corn behemoth, he’s actually has the right instincts.

When asked by the Center for Rural Affairs about his priorities for food policy, Vilsack hit all the right notes:

“There will be an opportunity next year with the re-authorization of child nutrition programs to address that need first. The Conservation Stewardship Program must be more adequately funded than in the past to preserve our most precious resources — our soil and water. And rural entrepreneurial development, next generation biofuels, expanded wind/solar/geo-thermal uses for land, specialty crops, local foods efforts and rural, high-speed broadband internet access need investment.”

Vilsack supports reducing subsidies to America’s largest farmers (though he could definitely take a tougher position) and has been excellent on livestock market reforms. He has been a long-time supporter of corn-based ethanol, but back when he was running for president (I know, if you blinked you missed it) the right people were seriously supportive of his energy platform. And when talking about ethanol recently, Vilsack displayed a genuinely nuanced understanding of its problems and limitations. Here he is talking to Mark Nickolas of Political Base:

POLITICAL BASE: As Iowa governor, one of the energy-related issues you’ve become famous for is ethanol. Yet, there is growing criticism over using food products, arable land, and massive amounts of water for the production of fuel instead of for food. There’s also a number of concerns that — while it may reduce our dependence on foreign oil — it does little or nothing to deal with climate change. How do you respond to those concerns?

VILSACK: Well, I think corn-based ethanol and the production processes that have been used up to this point have been a good starting-point for the conversation we have needed to have in this country for a number of years about our energy sources and our energy needs. And we as a country, through congressional action, have made a commitment to renewable fuels that is fairly significant, going from where we are today – eight to nine billion gallons of our supply — of about 125 billion gallons, to about 36 billion gallons by 2016. So, we’ve made a commitment to renewable fuel.

What we need to do now is to figure out how to make it more efficiently in a way that does not jeopardize water resources, in a way that does not compromise our capacity to feed not only our people but to provide opportunities for export which will help stimulate growth of our rural communities. I think that can be done. There’s research going on right now that will increase productivity on our farm fields and several demonstration projects going on in Louisiana and Iowa in particular in looking at cellulosic material that could be used in addition to, or as a substitute for the corn kernel that is currently being used. I know there is research under way that is going to make the production process far more efficient in terms of water resources, and in terms of power that is necessary.

…there’s just tremendous opportunities here, I believe, and this was a good way to start the conservation. But I do not believe it is realistic or feasible that we can continue to do what we’re doing and meet those energy needs and not compromise various other aspects of agriculture.

Vilsack isn’t a reformer and he probably isn’t going to turn USDA on its head. But for a conventional pick, he seems to have a solid understanding of where food policy has been and where it needs to go. The Obama team floated some names for Secretary of Agriculture, such as the current head to the House Committee on Agriculture, who don’t get it at all. Reformers and foodies shouldn’t be overjoyed today, but they should have hope that maybe, just maybe, the odious business-as-usual that has dominated food policy in this country for decades may be coming to an end.