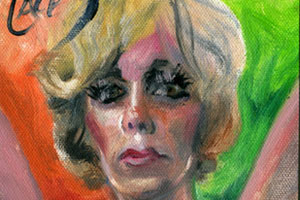 Orly Taitz, the queen bee of the birther movement, sounds distraught. “I’m going through hell,” she says.  The California dentist-lawyer had called to tell me about what she says is a campaign to scare her family so that she’ll abandon her quest to become California’s next Secretary of State. She says she’s endured death threats and an attempt to tamper with her car. But this time, she says, her opponents have gone too far. The final straw?  An elaborate oil painting of a nude Taitz, legs splayed, giving birth to… a pancake.

First, a little back-story. For two years, Taitz has been demanding that California’s secretary of state request more evidence that President Obama is truly an American-born citizen. In March, she got herself on the ballot to run for the job in the Republican primary. But since declaring her candidacy, Taitz says that Obama supporters have been targeting her children—she has two in high school and one in college—via their Facebook pages with disturbing messages and images of their mother.

Exihibit A, says Taitz, is a series of paintings of her by Dan Lacey, the so-called “pancake painter,” who achieved minor celebrity during the 2008 presidential race for his numerous depictions of a naked, muscular Obama perched atop a unicorn. He’s also painted Sarah Palin, John McCain and Mother Theresa, among other famous figures, with a pile of pancakes atop their heads.

But Taitz doesn’t feel flattered to be in such company. She maintains that the painting titled Orly Taitz, Pancake Birther actually portrays her holding a placenta rather than a pancake. “This is really despicable,” she says, theorizing that one of her many political enemies put Lacey up to the work. But she says she’s more concerned about the effect the paintings are having on her children.

For his part, Lacey quips, “I thought all of these were rather sweet paintings of her giving birth so I don’t know why her family would be upset. Perhaps her children now suspect that they are actually pancakes.” He confirms that some of the original Taitz paintings were commissioned (though he won’t say by who). But most of them, he says, were his own inspiration. Lacey listed the paintings on eBay, where one sold for about $200. “Orly remains a popular auction subject,” he explains, “though not quite as popular as Michael Jackson.” 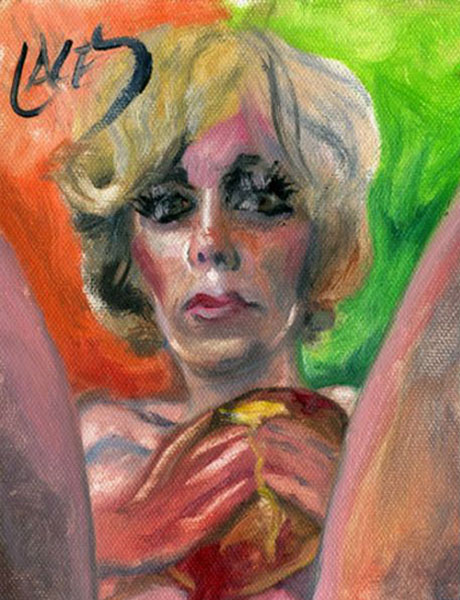 The famously litigious dentist has not sued Lacey, saying she fears that doing so would only bring him more publicity. But she has used the paintings in a legal filing against someone else: her opponent in the GOP primary for secretary of state, Damon Dunn. In March, Taitz sent a criminal complaint to the Orange County registrar of voters accusing Dunn of voter fraud and demanding an investigation into alleged intimidation aimed at her and her children. Taitz observes in the complaint that Dunn, a former NFL player, had never voted until nine months before deciding to run for the state’s top elections position. She also accuses him of having been registered a Democrat in Florida until just a few months before he declared his candidacy in the Republican primary—a fact his campaign has conceded.

Taitz believes Dunn’s campaign is merely one cog in a larger conspiracy to keep her out of office.  Her letter to the registrar includes a reference to the Lacey paintings and emails sent to her kids:

These e-mails were clearly sent with the intent to cause severe emotional distress to my children and to me and with an attempt to harass my whole family, and to intimidate me into dropping out of the race for the Attorney General [sic]. While the e-mail was signed as coming from Damon Dunn, I actually don’t believe that Mr. Dunn personally sent these e-mails. I believe these e-mails were sent by his supporters or by supporters of Mr. Obama, as I currently have an active legal action in the Washington DC Taitz v Obama 10-cv-151-RCV.

One of the Facebook messages allegedly sent to Taitz’s children came from someone pretending to be Dunn. It said:

Will you be visiting your mum in jail after she’s sent there for approving of, publishing and encouraging her supporters to issue death threats against the family members (little children) of federal court judges in order to intimidate and coerce them into ruling in her favor?

Another, which went to her husband, read:

Is there some reason her family (ie you) haven’t put her into some form of treatment centre for her full blown paranoid delusional state at this point?

In her complaint against Dunn, Taitz also mentions voicemail messages that have been left on her cell phone and offers to submit them to law enforcement for verification. She says one caller told her that,  “the best thing you can do for America, is slid [sic] your wrists, you fucking bitch.”

This isn’t the first time Taitz has complained of harassment. In December, in one of her many lawsuits challenging Obama’s legitimacy, she insisted that someone had tampered with her car (she included an explanatory drawing).

But for all the vilification that Taitz describes, she’s keeping her eyes on the prize. If she prevails in her bid for office, she’ll become the gatekeeper for the entire California elections system, meaning that Obama will have to go through her to get his name on the presidential ballot in 2012. And Taitz is emphatic about her intentions if she wins.  She writes, “If I become Secretary of State, I will demand proper original vital records from Obama.” Pancakes or no pancakes.