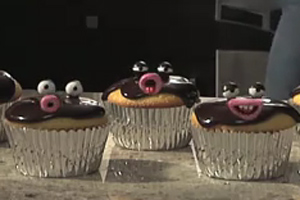 *Update: After this was posted, Duncan Hines pulled their commercial from YouTube, according to The Vancouver Sun. You can still watch the video below. A Duncan Hines spokesperson told me via email that “Our intent was to entertain fans with a fun video about chocolate glazed cupcakes, and nothing more.”

When Duncan Hines partnered with film studio Filmaka to release a new ad campaign on YouTube this week for their “Amazing Glazes” frosting line, their aim was to “inspire creativity during the height of baking season” and portray how their icing “makes dessert sing.” The theme of the first video is “Hip Hop Cupcakes,” (see below), but rather than striking a chord with urban bakers, the video just seems to be pissing them off. Readers and bloggers have criticized the film’s director, Josh Binder, and the dessert company’s PR department for failing to see how the cupcake characters might be mistaken for performers in blackface. Director Binder has a number of videos that might be considered “controversial,” like one for Western gear in which a cowboy lassos two women to be his companions, and another that shows samurai bread loaves crying “hi-YA!” at one another.

Binder’s Duncan Hines commercial shows vanilla cupcakes that—when covered in gooey chocolate frosting—begin to sing. An enraged commenter on the site Racialicious complained: “I am appalled that there seems to be not one single marketing staffer at Duncan Hines/Pinnacle Food Groups with any awareness of the legacy of US minstrelsy and racism that is inextricable from the dark brown, red-lipped, googly eyed characters” depicted in the video. Writes a Womanist Musing blogger: “Do I really need to break down why Blackface cupcakes are racist? I sincerely hope this commercial is fake, because if not, it represents a direct attack on Black people.”

Duncan Hines might have saved itself the outrage if they had searched for a different title for their bizarre cake characters other than “Hip Hop.” Some viewers are perplexed at what makes the music from the video hip hop; there are no lyrics, for instance, and the music seems more focused on harmony than beat. “Black Eyed Peas sound more hip hop than that,” writes an administrator on WooHa.com.