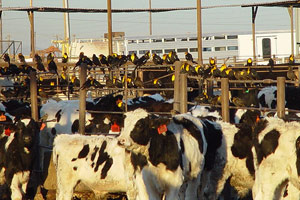 In “Big Meat vs. Michael Pollan,” reporter Wes Enzinna profiles the Master’s in Beef Advocacy program, an industry-funded crash course on how to bolster the reputations of cattle farmers and meat producers in a time when livestock prices are falling and beef consumption is the lowest it’s been since 1961.

But rather than focusing so much on the PR battle, cattle farmers might woo consumers by downsizing. Much of the bad rap associated with the meat industry relates to the transformation of the small family farms into overcrowded feedlots managed by agribusiness monopolies—at least, according to a new project by Food and Water Watch, called “Factory Farm Nation.“

“For several decades, agricultural policy in the U.S. has been based on this ‘get big or get out’ approach, which is incompatible with a sustainable food system for consumers and producers,” says the project’s website. Along with an extensive report on why this is true, Food and Water Watch also unveiled an interactive “Factory Farm Map,” which shows the population density of pigs, cows, and chickens in each state. Both fun to play with and aesthetically eye-popping, the tool seeks to shed light on how “family farms are being replaced by factory farms, and these facilities are overwhelming some regions of the country.” 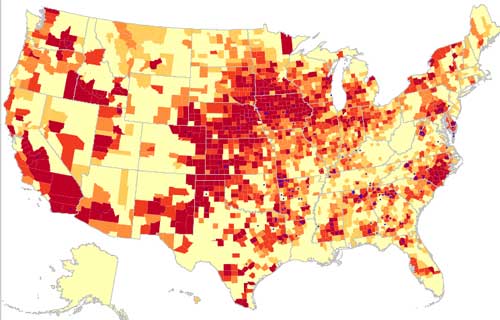 Take California: The map’s dairy filter reveals that huge swaths of the state contain “extreme density levels” of dairy cows. Switch to the hog filter, and you’ll notice how almost the entire state of Iowa is crowded with pigs, and a surprising number of meat plants too. The map allows you to click on regions within each state, so you can learn, for instance, that the number of animals in Buena Vista County, Iowa nearly doubled from 2002 to 2007. Also interesting to note: Factory farms tend to be clustered around meat packers (shown by blue dots on the map), which reflects the control these increasingly consolidated slaughterhouses exert over farmers. Just four firms processed more than four out of five beef cattle in 2007, according to the report.

The goal of the whole Factory Farm Project, explains the website, is to drum up support for a different sort of farm bill in 2012—one that would require fair prices for livestock and prevent huge monopolies from edging out the small guys. Because maybe if they knew their hamburgers came from fairly-paid farmers down the road rather than colossal, crowded feedlots across the country, more Americans might be choosing beef as “what’s for dinner” again.