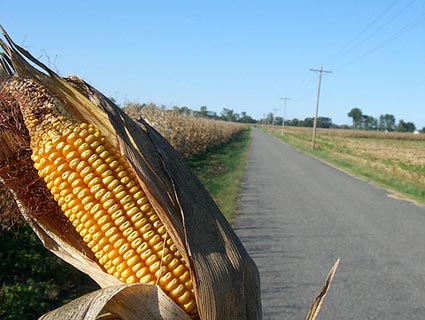 I have a really bad idea.

Let’s push farmers to plant as much as they possibly can of our most ecologically devastating crop. Maybe we’ll even get them to plow up some erosion-prone grasslands to do so. Then we’ll take a huge portion of the bounty (say, 40 percent) and subject it to a Byzantine, energy-intensive process that will turn it into something (barely) suitable for internal-combustion engines. (Never mind that internal-combustion engines, powering private pods over roads always in need of extravagant maintenance, are a rotten way of converting energy into mass locomotion.)

The production process generates a heaping amount of a byproduct tainted with antibiotics and industrial chemicals. No worries—we’ll feed that stuff to livestock on vast factory farms, even though it increases deadly pathogens in beef and does terrible things to pigs. Since the whole idea is so clearly misbegotten, we’ll need to deploy serious government support to keep it from stalling. How about decades of lucrative tax breaks, bolstered in recent years by upward-spiraling usage mandates? We’ll need a bit of PR, too, to keep the public from squawking. Let’s just pretend that the product we’re peddling is a green, job-creating machine that will “wean us from foreign oil.”

That, in a nutshell, tells the story of America’s corn-based ethanol boondoggle over the past three decades. (For the rollicking tale of how the whole thing got started in the first place, go here). Over the same time span, we’ve allowed our national rail-transport system to wither into self-parody; watched as cities defunded or neglected mass transit; failed to make necessary investments in clean energy sources like wind and solar while also declining to force fossil energy producers to pay for the massive damage they cause; and, most recently, elected a Democratic president who seems hell-bent on putting Sarah Palin’s “drill, baby, drill” energy vision into place. And through it all, our government’s blind, deep-pocketed loyalty to corn-based car fuel has endured.

But that may be changing … at least partially. Last week, the Senate voted 73-27 to remove one of the industry’s oldest and most-cherished pillars: the tax break gasoline blenders get for every gallon of the corn-based fuel they mix.

There’s no doubt that the tax break is a massive waste of resources that must end. This year alone, the ethanol tax credit will cost the Treasury $6 billion—equal to about 65 percent of the annual federal outlay for public school lunches. That means instead of propping up a crappy fuel source, we could boost our annual investment in child nutrition by two-thirds without increasing the deficit by a penny.

Another way to look at it is this: Ethanol sucks in about 75 percent of the total tax breaks granted to alternative energy, leaving wind and solar to fight for scraps. By pulling the plug at long last on the ethanol tax break, we could make significant investments in energy sources that actually reduce carbon emissions (unlike ethanol, which doesn‘t).

But here’s the kicker: Even if the Senate’s move makes it through the House and the White House—both hotbeds of ethanol boosterism—it will do nothing to stem the flow of industrially produced corn from Midwestern farms to distillers  to gas tanks. That’s because the tax break became utterly redundant when President Bush signed the 2007 Energy Act, which stipulated that gasoline makers inject a large and ever-growing amount of ethanol into the fuel mix. Take the tax break away, and the ethanol juggernaut will lurch on, sucking in billions of bushels of resource-intensive corn and spewing out billions of gallons of low-quality car fuel.

Moreover, savings from ending the ethanol tax break will not go to crucial programs like school lunches or clean energy. Instead, they’ll almost certainly vanish into the maw of Washington’s deficit hysteria.

In short, the Senate’s move to revoke ethanol’s multi-billion dollar annual grab from the national trough is both long overdue and futile. Support for ethanol is too ingrained—so to speak—in our political culture to be ended simply by taking away a redundant tax subsidy. To put corn ethanol in its rightful place—the compost pile of history—would require the Democrats to do something they have utterly failed to do, under Obama or before: spell out a coherent national energy/transportation policy that transitions us from fossil fuels to true renewables. And that will happen not with draconian budget cuts, but rather by spending money to build out a proper renewable-energy/green-transportation infrastructure.