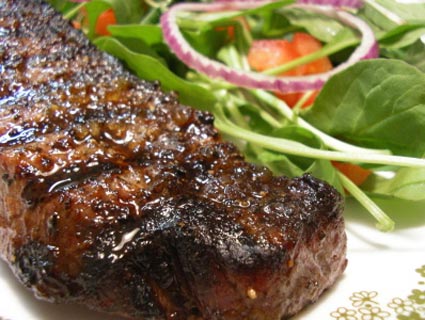 The United States has one of the highest diabetes rates in the developed world—and the malady is spreading faster here than it is in most other rich nations, a recent Lancet study (registration required) found.

I’ve always associated our diabetes problem with the steady rise in sweetener consumption since the early ’80s, triggered by the gusher of cheap high-fructose corn syrup that opened up at that time. But another culprit may be contributing, too: exposure to certain pesticides and other toxic chemicals. A new peer-reviewed study published in the journal Diabetes Care found a strong link between diabetes onset and blood levels of a group of harsh industrial chemicals charmingly known as “persistent organic pollutants” (POPs), most of which have been banned in the United States for years but still end up in our food (hence the “persistent” bit—they degrade very slowly).

The ones with the largest effect were PCBs, a class of highly toxic chemicals widely used as industrial coolants before being banished in 1979. Interestingly, the main US maker of PCBs, Monsanto, apparently knew about and tried to cover up their health-ruining effects long before the ban went into place. Organochlorine pesticides, another once-ubiquitous, now largely banned chemical group, also showed a significant influence on diabetes rates.

The researchers identified a group of 725 diabetes-free elderly Swedes and tracked them for five years, studying the level of POPs in their blood. Thirty-six of them ended up contracting Type 2 diabetes—and the ones who did had significantly higher POP levels than the ones who didn’t. The researchers stress that the study’s sample size is small, but their findings build on other recent data suggesting a POP/diabetes connection. Evidence for such a link is “piling up,” David Carpenter, head of the Institute for Health and the Environment at the University at Albany, told Reuters.

Decades after the banning of most POPs, are Americans still routinely exposed to them? Evidently, yes. Levels are declining, but they remain significant.  In a 2010 study published in Environmental Health Perspectives, researchers found traces of a range of them in food procured in Dallas supermarkets. In a long article pivoting off of the study, Scientific American’s Emily Elert wrote:

Recent studies sketch a complex profile of legacy contaminants in U.S. food—a profusion of chemicals in trace amounts, pervasive but uneven across the food supply, occurring sometimes by themselves, but more often in combination with others. Included are DDT and several lesser-known organochlorine pesticides as well as industrial chemicals such as polychlorinated biphenyls, or PCBs, which were used until the late 1970s in electrical equipment.

How are these awful chemicals sticking around and still causing trouble decades after being banned? POPs accumulate in the fatty tissue of animals—and transfer to the animals that eat them, including humans who eat meat and fish. In industrial animal farming, livestock are often given feed that includes animal fat, which helps POPs hang around in the food chain. “We feed the cow fat to the pigs and the chickens, and we feed the pig and chicken fat to the cows,” one expert told Elert. The widespread practice of feeding “poultry litter“—chicken feces mixed with feathers, dead chickens, and feed remnants, including beef products—to confined cows is another way these toxins keep cycling though the food chain. Why would the meat industry engage in such feeding practices? Simply put, because they’re cheap.

Farmed salmon, too, carry significant levels of these dodgy chemicals, especially PCBs. The Dallas supermarket study found farmed salmon to have the highest PCB levels of any food they tested. Earlier studies, too, have yielded similar findings. A 2004 Science paper found PCB levels in farmed salmon seven times higher than in wild, and advised consumers to limit their consumption of the farmed salmon.

Given these findings and the emerging link to diabetes, it seems smart to limit consumption of factory-farmed meat and fish. And ’70s-era chemicals like PCBs are only part of the problem. A newer chemical class called polybrominated flame retardant (PBDEs) also appear to be entering our bodies through industrial meat, recent research published in Environmental Health Perspectives shows. These persistent toxins are only now being phased out, but they’re ubiquitous in everything from furniture to textiles—and in the equipment used in factory-scale meat processing. PBDEs “accumulate in the liver, kidney and thyroid gland and are known endocrine disrupters,” EHP reports, and they have also been linked to diabetes.

The USDA, which oversees the safety of the meat supply, seems incapable of addressing the problem. Twice since 2008, the USDA’s inspector general has seen fit to rebuke the agency for failing to adequately test meat for traces of pesticides, antibiotics, heavy metals, and other toxins. Always under pressure from industry and now facing budget cuts, I doubt the USDA will ramp up testing anytime soon. Product tainted with toxic, possibility diabetes-causing residues may be just another hidden price we pay for the meat industry’s cost-slashing business model. That’s bad news in a nation where per capita average meat consumption approaches two-thirds of a pound a day.