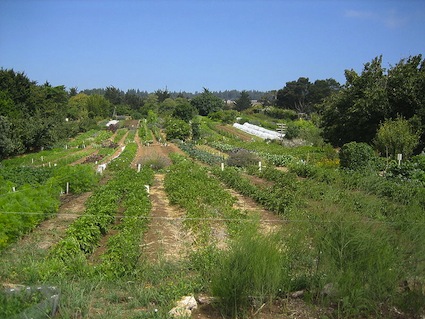 The organic farm at the University of California at Santa Cruz. <a href="http://commons.wikimedia.org/wiki/File:UCSC_farm.jpg">David Silver</a>/Wikimedia Commons

Over on the Scientific American blog, Christie Wilcox set out to expose the “myths” of organic farming. Frankly, the piece was so poorly reasoned that I read it with a yawn. But people take Scientific American seriously (as they should—it’s a great publication) and the piece was received with credulity on Matt Yglesias’ influential blog and at my former employer, Grist. (Grist has since published a critique of the Wilcox piece by Tom Laskawy).

Since some smart people seem to be buying what Wilcox is peddling here, let’s look at her central claims.

1) Organic farms are seething hotbeds of toxic pesticide use. Wilcox notes, correctly, that organic farms are allowed to use certain non-synthetic pesticides. I agree the practice is problematic. Organic farming is built on the principle of on-farm ecological balance—that crop biodiversity should provide habitat for a variety of “beneficial insects,” which should in turn keep crop-eating ones under control. Use of pesticides, even non-synthetic ones, represents a breakdown of that principle, and should be avoided by organic farmers.

But how much of a problem is pesticide use on organic farms? To hear Wilcox tell it, buyers of organic food are unwittingly getting all manner of pesticide traces on their produce. To back that up, she drops this dud of a bombshell:

Furthermore, just over 1% of organic foodstuffs produced in 2007 and tested by the European Food Safety Authority were found to contain pesticide levels above the legal maximum levels—and these are of pesticides that are not organic.

Just over 1 percent, eh? That means that just under 99 percent were found to be ok. Scary! It would be interesting to see how non-organic food fared in that study; Wilcox doesn’t see fit to compare the two. Meanwhile, back here in the United States, the USDA collects data on pesticide traces on produce. In 2009, reports the Organic Center, the USDA analyzed 386 samples of organic lettuce, “by far the most extensive sampling of an organic food crop for pesticide residues ever carried out in the world.” Again, “just over 1 percent” of the samples contained a pesticide residue not approved for use on organic farms, the OC reports. As for pesticides approved for organic use, 78 samples carried traces of those, meaning that 20 percent of organic produce carried a residue.

Thus, despite Wilcox’s bluster, organic food is clearly consumers’ best bet for avoiding pesticide traces on their food. (For more information on the pesticide-residue cocktails that coat conventional vegetables, see my analysis of Environmental Working Group’s recent report on the topic.)

2) Organic and conventional foods are nutritionally identical. To make her case, Wilcox cites a literature review that found that “evidence is lacking for nutrition-related health effects that result from the consumption of organically produced foodstuffs.” The study’s authors acknowledge a “paucity of available data” on the topic, meaning that the conclusion hangs on thin evidence. But Wilcox sums the results up with an air of “case closed.”

In reality, there’s a robust, ongoing debate about whether organic foods contain more nutrients, particularly micronutrients. A 2007 study by researchers at University of California-Davis found that organic tomatoes had nearly twice as much of two key flavonoids—the antioxidant that makes tea, wine, and other richly colored foods so healthy—than conventional tomatoes. A 2008 Organic Center literature review similarly found increased antioxidant levels in organic samples across a range of vegetables. Wilcox is free to opine that organic foods aren’t more nutritious than conventional; but she’s not free to declare that the matter is settled. It’s simply not true. For a deeper dive into the debate, see an exchange I had with Washington Post star political blogger Ezra Klein in 2009.

3) Organic agriculture can be redeemed if only its definition can be broadened to include GMOs—which are the only way to feed the world. Wilcox’s claim is based on three assumptions: 1) Organic ag delivers sharply lower yields than chemical ag; 2) GMOs dramatically increase yields; 3) and GMOS therefore must be deployed on a much wider basis or literally hundreds of millions of people will be doomed to starvation. Wilcox presents these assertions as settled fact; in reality, they are all hotly disputed.

Her assertion about about organic yields hinges on a 2007 Science study of organic ag systems in Central Europe. Its authors found “crop yields to be 20% lower in the organic systems, although input of fertilizer and energy was reduced by 34 to 53% and pesticide input by 97%.” Now, this conclusion could be used to argue that organic ag should be dramatically ramped up—you could find an optimum level where a little yield is sacrificed for big savings in energy-intensive, polluting agrichemicals. Such savings will be critical to feeding the world going forward, given the massive problems associated with industrial agriculture’s reliance on synthetic nitrogen and mined phosphorus, and the consequences of those chemicals running off into critical fisheries like the Gulf of Mexico and the Chesapeake Bay.

Yet Wilcox presents the study as proof that any expansion of organic ag would lead us to Armageddon. Meanwhile, she ignores other research (see here and here) suggesting that organic ag achieves yields comparable to those of conventional ag, and with drastically lower inputs.

As for the claim that GMOs increase yields, Wilcox is satisfied to assert it without backing it up. Yet so far, after more than 20 years of research and 15 years in farm fields, GMOs have done little or nothing to boost yields, but have managed to dramatically ramp up herbicide use. And promises of wonder crops, such as those engineered to use less nitrogen, have so far failed to materialize, despite much hype.

Wilcox is so busy pushing GMOs as the solution that she ignores an emerging consensus among among ag scientists and development specialists that directly contradicts her assertions. In this view, “agroecology”-based farming techniques—built on on the organic-ag principles of low input use, biodiversity, and non-GMO plant breeding—offer the surest path to a robust food system amid population growth and resource scarcity.

In short, in her effort to expose the “myths of organic farming,” Wilcox has instead amplified several myths of her own—each one of them them a warmed-over agrichemical-industry talking point. It’s distressing to see a great publication like Scientific American swath them in undue credibility; and more distressing still to see smart writers repeat them uncritically.