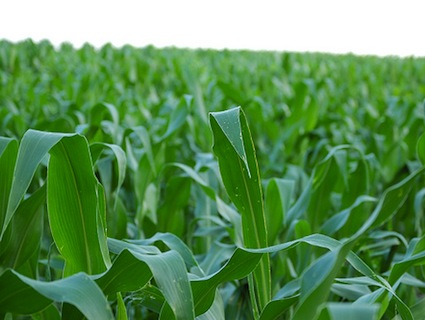 A corn field in Iowa: excellent habitat for corn rootworms. <a href="http://www.flickr.com/photos/planmygreen/2675568751/">Rastoney</a>/Flickr

Yesterday I showed that Monsanto’s formidable Bt corn empire, whose domain extends to about 65 percent of corn grown in the United States, appears to be on the verge of being brought to its knees by a humble insect called the corn rootworm. Make that the Bt-resistant corn rootworm.

What to do about it?

One approach, of course, is to do what Monsanto did about its other festering resistance problem: weeds resistant to its flagship herbicide, Roundup. Bill Freese, science policy analyst for the Center for Food Safety, points out that—similar to Bt-resistant rootworms today—Roundup-resistant “supwerweeds” first appeared in isolated fields in the early 2000s, and Monsanto’s first reaction was to deny the problem existed. Yet Roundup resistance soon exploded, and now affects a stunning 11 million acres—and growing—nationwide.

Today, Monsanto deigns to acknowledge the problem—and claims it has the solution: It will engineer crops that can withstand multiple powerful herbicides. This approach could be described as “ignore the problem, let it careen out of control, then dramatically escalate the response with profitable and questionable new technologies.”

Something similar seems to be afoot with the superinsect problem. The Wall Street Journal reported that Monsanto is developing a new genetic technology called RNA interference to, “among other things, make crops deadly for insects to eat.” In other words, “forget that our current technology is failing—look at this wonderful technology that beckons!”

In a recent blog post, Union of Concern Scientists senior scientist Doug Gurian-Sherman warns that it will likely be “years, at least” before that novel technology is available to farmers. Moreover, “there is no reason to believe that [RNA interference] would not also face resistance problems.” In the meantime, farmers could muddle along by spraying toxic chemicals in their effort to control Bt-resistant rootworms, just as they are now spraying increasingly toxic herbicide cocktails to try to knock down Roundup-resistant weeds. And, it will be difficult to wean farmers from Monsanto’s Bt corn any time soon, because the company’s market dominance makes it quite difficult to find non-Bt seed. The Center for Food Safety’s Freese points to research from University of Illinois crop scientist Michael Gray suggesting that in Illinois corn country, 40 percent of farmers lack access to high-quality non-Bt corn seed.

Gurian-Sherman suggests a more robust and surer path to solving the problem than muddling along with the status quo and waiting for Monsanto to come out with its next blockbuster: crop rotations, and not just between corn and soy, but employing a variety of crops. The corn rootworm menaces industrial agriculture because industrial agriculture is so tightly focused on corn, which covers millions of acres of our farm land, providing a vast habitat for its pests. “The rootworm is not much of a problem if sensible crop rotations are used,” Gurian-Sherman writes.

And long [i.e., more than just corn and soy] crop rotations reduce more than rootworm damage. They greatly reduce most pests, including other insects, diseases, and weeds, thereby greatly reducing pesticide use as well. Long crop rotations also improve soil fertility, and reduce fertilizer use, cost and pollution. And they can be just as productive as our current corn obsession.

But as Gurian-Sherman points out, moving farmers away from their fixation on corn and soy means transforming federal farm and energy policy. Until that happens, Monsanto, despite its history of failed technologies, evasions, and denials of the obvious, is poised to keep dominating our agriculture and minting profits.