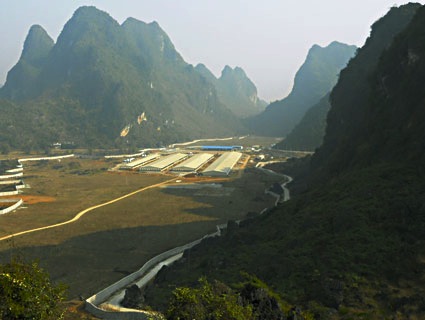 Factory-style hog farms in a Chinese valley. <a href="http://www.agfeedinc.com/">AgFeed Industries</a>

Given China’s vast and growing population and increasing appetite for meat, it’s no surprise the nation’s leaders have been scrambling for years to intensify food production along the US model.

Lately, however, the Chinese government appears to be questioning two key tenants of US industrial-ag dogma: 1) that daily low-level doses of antibiotics are necessary and desirable for livestock production, and 2) that genetically modified crops are safe to eat.

The first bit, from a brief recent report in the US ag trade journal WattAg.net has been generating lots of buzz in the sustainable-ag blog/listservosphere over the past couple of days:

China’s Ministry of Agriculture has announced a forthcoming ban on antibiotics as growth promoters in animal feed.

The ban is supported by the academic community, which believes that without antibiotics in animal feed, the health of animals will be better promoted, microbes’ resistance to antibiotics will be lowered and food will become safer to eat.

Assuming the report is accurate—I have not been been able to independently confirm it—the move would mark a massive shift. China accounts for half of the world’s pork production. Over the past 30 years, it has moved from widely dispersed backyard hog farming to huge, vertically integrated operations modeled on US giants like Smithfield. And that means massive amounts of antibiotics going into livestock feed. How much? The excellent public health reporter Maryn McKenna puts it into perspective:

As for genetically modified foods, both Greenpeace and Third World Network are pointing to a report in the Chinese-language business newspaper The Economic Observer claiming that the government has suspended commercialization of GM rice and wheat for 5 to 10 years. According to a translation of the Economic Observer article published by Third World Network, the rationale is two-fold:

[0]ne is that there has been a lot of questioning about the safety of genetic modification from various sides; the other is based on the judgement that currently in China, GM staple food crop-related research, promotion, regulations, even later-stage business operation, etc. are not yet mature.

This suggests that the Chinese government is doing something its US counterpart has refused to do since the rise of GMO seeds in the ’90s: take a precautionary approach to the novel technology.

Interestingly, the government appears to be making a distinction between staple crops like rice and wheat that people eat directly, and corn, which almost exclusively goes into animal feed in China. According to the Economic Observer report, the government is forging ahead to commercialize GM corn.

China will obviously exert plenty of influence over how the world feeds itself over the next generation. It’s interesting to see the nation show signs, at least, of straying from the US model it so tightly embraced over the previous generation.