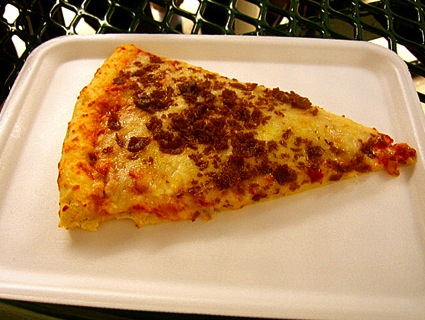 Congress is in the process of figuring next year’s agriculture budget, and the food industry is using the occasion as an opportunity to bully the USDA as it rolls out new rules for the National School Lunch Program. According to the New York Times, Big Food has already dropped a cool $5.6 million lobbying to kibosh the new rules.

Why does the industry care about school lunches? Because school cafeterias get less than a dollar a day per student in federal funding to spend on ingredients (about two-thirds of the maximum $2.94 outlay per lunch goes to overhead and labor), and many public schools lack cooking facilities altogether. So cafeterias often outsource cooking to massive entities that know how to squeeze a profit by selling lots of dirt-cheap food—companies like meat giant Tyson and its infamous heat-and-serve “Dinosaur Shaped Chicken Nuggets,” and Conagra and its frozen pizzas.

In January, the USDA came out with new guidelines governing what can go on kids’ plates. Mandated by a 2004 act of Congress ordering USDA to align school lunches with the Dietary Guidelines for Americans, the rules (PDF) impose two new criteria that have drawn the ire of the food industry.

First, they rewrote the requirements around vegetable and fruit servings. Before, cafeterias were required to serve at least one vegetable per day, and the definition was expansive: Tater Tots and French fries, for example, counted. Now, they limit the amount of potatoes and other “starchy vegetables” to no more than one cup (two servings) per week—and require schools to serve at least one serving per week of dark green and red/orange vegetables. Second, they no longer allow the two ounces of tomato paste that lacquer a typical frozen pizza to count as a vegetable.

To Big Food and its friends on the Hill, none of this would do. Back in October, by a unanimous vote, the Senate slapped an amendment on its ag appropriations bill that will rescind the limit on potatoes. This, despite a major recent Harvard study finding that regular consumption of potatoes in all their forms, fried and not, contributes heavily to unhealthy weight gain.

A June letter from Sen. Amy Klobuchar (D-Minn.) to Agriculture Secretary Tom Vilsack, for example, celebrates the virtues of tomato paste in language that closely mirrors the arguments made by Schwan, a privately owned giant based in Marshall, Minn. And both Schwan and ConAgra have quietly helped to finance the “Coalition for Sustainable School Meals Programs” which maintains a red-white-blue—and yes green—website with the heading “Fix the Reg.”

According to Rogers, the House version of the ag-spending bill will likely contain a provision nixing the rule change, and preserving frozen pepperoni pizza’s status as a fruit/vegetable serving, so long as it harbors a bit of tomato paste. Between the Senate’s amendemnt and this coming move from the House, school cafeterias will remain profitable places to move cheap corporate French fries and pizza, and train a new generation to regard such dubious fare as every-day food.

In my recent post on food and Occupy Wall Street, I showed how the food system, like the financial system, is both in desperate need of reform and utterly trapped under the heel of industry influence. The gutting of the USDA’s new lunch guidelines provides yet another example.

UPDATE: I wrote this post before the House came out with its spending bill late Monday afternoon. It turns out, it’s even worse than I thought. Associated Press:

The final version of a spending bill released late Monday would unravel school lunch standards the Agriculture Department proposed earlier this year, which included limiting the use of potatoes on the lunch line and delaying limits on sodium and delaying a requirement to boost whole grains.

The bill also would allow tomato paste on pizzas to be counted as a vegetable, as it is now. USDA had wanted to prevent that.