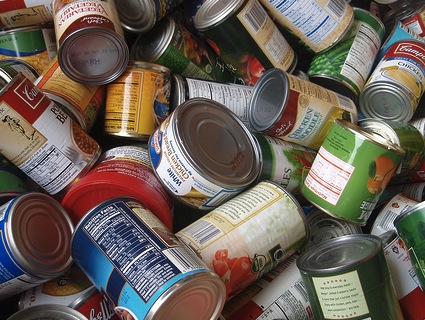 Bisphenol A (BPA) is a synthetic chemical that mimics estrogen. Even in tiny doses it has been linked to cancer, reproductive trouble, and irregular brain development in kids.

It’s really the sort of thing you want to keep well clear of your food. Unhappily, in addition to being vile stuff for humans, it also has properties that make it quite attractive for manufactures of food packaging. As Mother Jones has noted before (“Waiter, There’s BPA in My Soup“), it’s in the lining of virtually every can in the supermarket, from baby food to beer to Coca-Cola to chicken soup. Even some organic brands use it in their canned tomatoes.

And yes, it moves from those cans into our bodies (see here,  here and here).

The FDA—the agency charged with overseeing the safety of the food supply—for years bucked a growing weight of scientific evidence and declared it safe. Then, in January 2010, the agency shifted course, declaring it had “some concern about the potential effects of BPA on the brain, behavior, and prostate gland in fetuses, infants, and young children.” In a report released in May of this year, FDA scientists tested “commonly consumed” canned foods from supermarket shelves, just to make sure BPA was really leeching from the can linings into the food (as ample previous reseaerch had already confirmed). The results: 71 of 78 samples had “detectable” levels.

All the while, the agency has avoided making a decision on the question of whether or not to ban the chemical, and millions of Americans continue to be exposed to it daily. Why the delay? Given the weight of evidence indicting BPA, I can only conclude that the chemical-industry lobby, rallying to protect a lucrative market, has convinced the agency to sit on its hands.

This week, hounded by a lawsuit from the Natural Resource Defense Council, the FDA has announced it will make a final decision on BPA by March 31, 2012. I wish we could expect the Obama administration to take the side of science and public health here. But given what we know about industry influence over regulatory decisions in this administration?and after seeing what happened with the FDA’s decision over the “morning-after pill”?the chemical industry may well have this one in the can, along with its BPA.