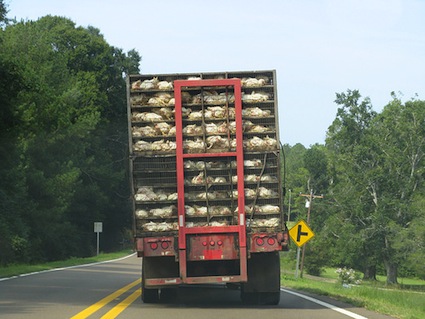 I was going to call this post “The Poultry Industry’s Dirty Secret,” but then I got to thinking: Isn’t that too broad? It raises the question of which dirty secret—the fact that it turns independent family farmers into low-income serfs? Intentionally feeds arsenic to chickens, which ends up both in meat and in ground water? Severely damages one of the nation’s most productive fisheries with tainted chickenshit? Routinely sends out chicken that’s infected with pathogens resistant to several antibiotics?

So I added the parenthetical modifier “latest.” This one shocked even me. Reports the meat-industry trade journal Meatingplace (sub required):

Survey results seem to indicate that about 80 percent of poultry growers don’t ever sanitize their crates, according to an Auburn University survey of 10,317 farms. What’s more, just 18.3 percent sanitize their trucks and trailers—two areas that contribute to the spread of Salmonella and Campylobacter.

Shocked by these conditions? Also check out this video showing what happens to mama sows and piglets on hog farms.

What does this mean? First it’s important to get some definitions straight. For background, this Humane Society of the United States report (PDF) delivers a pretty good overview of how poultry facilities work. Every year, HSUS informs us, the industry raises 9 billion birds in sheds the size of 1.5 football fields (about 450 feet) lengthwise and 40 feet wide. These factory-style facilities hold as many as 20,000 chickens, with enough space to offer each about a letter-size piece of paper’s worth by the time they reach market size.Naturally, such conditions—along with the industry’s zeal to get birds to fatten as quickly as possible—leads to all manner of injury and disease, HSUS reports:

Between 5-7 weeks of age, broiler chickens spend 76-86 percent of their time lying down, depending on the degree to which they suffer from lameness. This unusually high level of time spent lying down is thought to be related to fast growth and heavy body weight, and, in turn, leads to breast blisters, hock burns, and foot-pad dermatitis. Because sheds are sometimes cleared of litter and accumulated excrement only after several consecutive flocks have been reared, the birds often must stand and lie in their own waste and that of previous flocks.

As I’ve written so many times before, these sad birds are kept alive by daily doses of antibiotics—and so it’s no surprise that in 2008, Johns Hopkins researchers found not only poultry-house manure, but also flies that find their way into the houses, to be rife with bacteria resistant to multiple antibiotics.

Next, the birds, often wounded and feces-caked, are moved into crates to be taken for slaughter—the very crates that, the new poll tells us, are never sterilized at most facilities. There, for the rough passage to the slaughterhouse—”noise, vibration, motion, overcrowding, feed and water deprivation, social  disruption, and temperature extremes” (HSUS)—the crates are stacked onto those big trailers you may have seen on the highway. And those vehicles, as Meatingplace shows, are typically never sterilized, either.

And that’s where US meat birds spend their last days just before getting slaughtered, cut, and packed for the nation’s dinner tables and eateries. One more gross fact: These hell-on-wheels trucks have been shown to spew a haze of antibiotic-resistant bacteria in their wake as they thunder down the highway—and it can penetrate your car.

I guess among the poultry industry’s grand array of dirty secrets, the bit about the fetid crates and trucks is pretty small. But it certainly doesn’t send me groping for a chicken nugget.