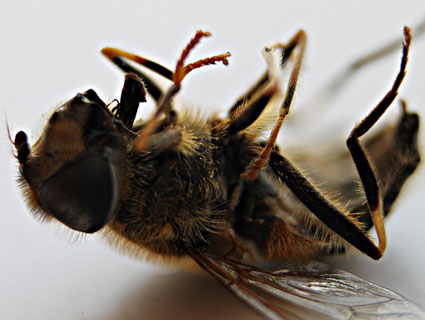 I’m doing something very odd this week: speaking at the annual conference of Croplife America, the main trade group for the US agrichemical industry. Croplife members include Monsanto, Dow, Bayer, and Syngenta, all massive multinational companies I write about regularly and witheringly. I am astonished that Croplife wants to hear what I have to say—what I think of the group’s member companies and their products is a matter of public record—and am curious to hear what they have to say to me.

As I prepared for the conference, a few interesting news items on the industry crossed my desk.

• As I’ve written before, Bayer’s neonicotinoid pesticides, which now coat upwards of 90 percent of US corn seeds and seeds of increasing portions of other major crops like soy, have emerged as a likely trigger for colony collapse disorder. Watch this NBC News report from last week linking bee kills in Minnesota to Bayer’s highly profitable product.

Meanwhile, the Columbus Dispatch reports similar bee die-offs in Ohio farm country, with beekeepers there, too, pointing the finger at Bayer.

• One of my biggest complaints about the agrichemical industry it its market dominance. As I say above, more than 90 percent of corn seeds planted today are treated with Bayer’s pesticide. What if a farmer wants to opt out, to plant seeds free of neonicotinoids? Good luck. According to a Pesticide Action Network press release I received today, farmers in the midwest are complaining that it’s virtually impossible to buy untreated seeds. In other words, farmers there have two choices: either pay up for Bayer’s poison, or exit the corn-growing business.

• Speaking of market dominance, Monsanto essentially owns the market in genetically modified seed traits—a highly lucrative position, given the way GMOs have taken over massive crops like corn, soy, and cotton. And like any well-run company out to maximize earnings for its shareholders, Monsanto invests some of its profit hoard in protecting its market from pesky regulators who might place the public interest over Monsanto’s. From the Center for Responsive Politics, which tracks money in politics:

According to OpenSecrets.org data, in the first three months of this year, Monsanto spent $1.4 million lobbying Washington—and spent about $6.3 million total last year, more than any other agribusiness firm except the tobacco company Altria.

Last year’s investment seemed to pay off for the company. Even as Monsanto’s Roundup Ready technology faltered under a blitz of resistant “superweeds,” the USDA unconditionally approved Roundup Ready alfalfa, after hinting strongly it would place limitations on the crop. The USDA also approved Roundup Ready sugar beets, defying a court order that it delay approval pending an environmental review.

When a company dominates markets and can buy lobbying power in Washington, its products don’t actually have to work, I suppose.