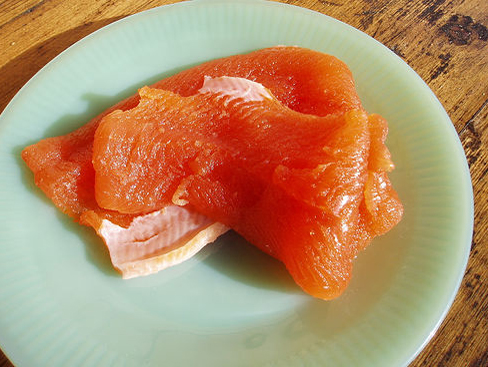 Flame retardants are everywhere—in our TVs and other electronics, in couches and chairs, and even in pajamas other products designed for babies. They’re even in our bodies—and at higher rates for minority children, according to one recent study. Apparently these toxic chemicals are also finding their way into our food, according to a new paper published Thursday in the journal Environmental Health Perspectives.

Researchers tested foods like fish, beef, and deli meats from a local grocery stores in Dallas, Texas. They found that 15 of the 36 foods they tested had detectable levels of hexabromocyclododecane (HBCD), a brominated flame retardant often found in insulation and electrical equipment. HBCD has been linked to problems in the immune and reproductive systems and endocrine disruption, and has been found to cause neurotoxic effects in children. It is considered a “persistent organic pollutant” because it sticks around the environment for a long time, is toxic, and can travel over long distances. This is why chemicals from an electronics manufacturer can end up in waterways—and in fish—a long way away.

“It’s getting into us, and some of it is getting into us from food,” Dr. Arnold Schecter, a professor at the University of Texas School of Public Health and lead author of the paper, told Mother Jones. Schecter has previously studied levels of HBCD and other similar chemicals in humans, and says that what worries him most is not just finding the presence of this particular chemical, but the cumulative impact of a variety of toxic chemicals in our environment.

The highest levels of the chemical were found in canned sardines, followed by smoked turkey sausages and fresh salmon. Schecter said animal products were most likely to carry the chemicals, because it accumulates in fatty tissue.

Flame retardants have been all over the news recently, after the Chicago Tribune‘s devastating series of stories detailing the politics and science of these chemicals. Previous studies have documented that they’re in out blood, body fat, and in breast milk, but this is the first study in the US investigating whether these chemicals are making their way into the food chain.

The US has started phasing out some flame retardants linked to health problems, like those that contain polybrominated diphenyl ether (PBDE). But it has not done so with HBCDs, the kind in this latest study. Recent studies about health impacts did prompt the US EPA to add it to its list of “Chemicals of Concern” in 2010. Earlier this year the European Union listed it as a chemical of “very high concern” and said it plans to ban it in the next three to five years.

As for what to do, Schecter says that eating less animal products is a good way to avoid the chemicals. “We’re eating too much animals and too little fruits and vegetables,” said Schecter. “For lots of reasons its good to eat less animals than the average American.” He noted that he does like hamburgers however, and suggested buying leaner meats and broiling them if you’re going to keep eating them.