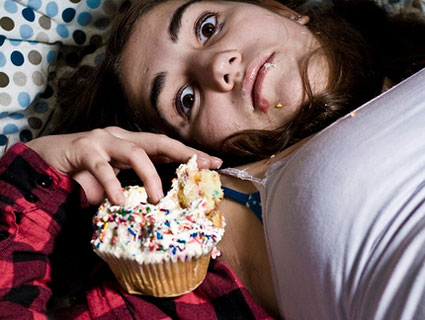 If you’ve ever experienced a cupcake coma (you know, the period of extreme lethargy that follows a sugar high brought on by consumption of one or more cupcakes), you might not be surprised by some recent findings on the effects of processed sweeteners. A team of UCLA researchers has observed that high-fructose corn syrup (HFCS) makes rats more forgetful, while omega-3 fatty acids—chemical compounds that research has shown can protect the brain’s synapses—seem to have the opposite effect.

The researchers, whose paper will be published this week in the peer-reviewed Journal of Physiology, trained a group of rats to navigate a maze. Then, they randomly divided the rats into four groups, and for six weeks they fed each group a slightly different diet in addition to the usual rat chow: One group received HFCS in its water; another received omega-3 fatty acids. A third received both HFCS and omega-3s, and the fourth, a control group, received plain old rat chow.

In addition to the memory effects, the researchers also noticed changes in the rats’ metabolism. The groups that had been fed HFCS showed signs of insulin resistance, a condition that has been linked to diabetes and obesity.

So can you up your recall skills by cutting HFCS out of your diet? Hard to say, since a controlled rat study doesn’t exactly count as proof that too much sweet stuff makes humans forgetful. But it’s certainly something that merits more scrutiny: The study’s lead researcher, biology professor Fernando Gomez-Pinilla, believes that insulin could affect the brain as well as the metabolic system. “Insulin is important in the body for controlling blood sugar, but it may play a different role in the brain, where insulin appears to disturb memory and learning,” said Gomes-Pinilla in a press release. “Our study shows that a high-fructose diet harms the brain as well as the body. This is something new.”