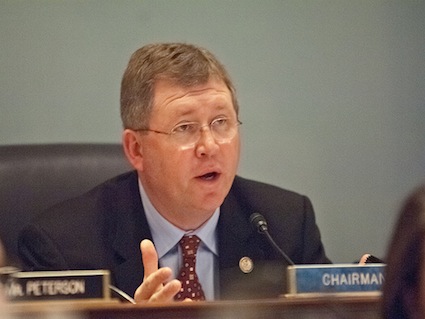 Rep. Frank Lucas (R-Okla.), chair of the House ag committee, and "valued partner" of the biotech industry. <a href="http://www.flickr.com/photos/usdagov/5454558678/sizes/m/in/photostream/">USDA</a>/Flickr

Surprising no one, the House agriculture committee has passed a boldly regressive farm bill draft—trumping the recently approved Senate version in generosity to Big Ag and austerity for the people who rely on the food-stamp program (now known as SNAP).

Summing up the bill’s main provisions, Ferd Hoefner, policy director of the National Sustainable Agriculture Coalition, called it an “anti-reform bill—bad for family farmers, rural communities, and the environment.”

But the committee added a dash of spice to this acrid stew of a bill that not even a political cynic like me could have predicted: Buried in the depths of the 557-page draft loom 16 pages of riders (see sec. 10011-10014) that, if passed into law, would gut the USDA’s already-weak ability to regulate the politically influential agriculture-biotech industry. (If you want to dive deep into the industry-friendly framework of the USDA’s GMO oversight, check out these two posts of mine from last year.)

Well, I guess I could have predicted it, if I had thought about it hard enough. Back in 2004, the Biotechnology Industry Organization (BIO) named the ag committee’s current chair, Rep. Frank D. Lucas (R-Okla.) its “Legislator of the Year.” “Representative Lucas is a valued partner in promoting agricultural biotechnology and in advocating for a science-based regulatory system for agricultural biotech products,” BIO declared in a press release.

The Center for Food Safety, a GMO-industry watchdog group that has successfully sued the USDA for not properly assessing novel crops under the National Environmental Protection Act and the Endangered Species Act, offers this analysis of the riders:

The bill would place strict limitations on what USDA can meaningfully consider when conducting environmental reviews of GE crops, and prohibit USDA from using funds to conduct any additional assessments. Further, all requirements of the National Environmental Policy Act or Endangered Species Act, would be banned, even if a crop approval would harm protected species.

Readers may recall that in a separate recent bill, the House ag appropriations committee snuck in language that would allow biotech companies to continue selling novel GMO products even if a federal court ruled that the USDA had deregulated them without proper scrutiny. The current bill would ensure that the USDA never gets a chance to give them proper scrutiny. Combined, if passed into law, the two bills would effectively negate any semblance of public oversight of new GMO crops.

And that’s not all the goodies for biotech lodged in the House ag committee’s bill. It also requires the USDA to develop and implement a “cohesive national policy for the low-level presence of agronomic biotechnology material in crops, including grain and other commodity crops, for food, feed, and processing.” This is about “genetic drift”—the fact that pollen from GMO crops drifts into and contaminates non-GMO strains. The bill would force the USDA to come up with a tolerance level for the presence of transgenic material in non-GMO crops—giving the industry cover from lawsuits from, say, organic farmers whose crops have been contaminated; or farmers who intend to sell non-GMO crops into markets that reject GMOs, as many foreign countries do.

Now, do these riders stand a chance of becoming law? First, the bill would have be passed by the full House, and then go to reconciliation with the Senate version. What I’m hearing from people on the Hill is that House Speaker Boehner will not likely put the bill up for a floor vote before the House goes on August recess. That’s because while the House ag committee’s version makes much deeper cuts to SNAP (food stamps) then the Senate version, Boehner fears that right-wing reps will push for even deeper SNAP cuts, sparking an intra-GOP fight that the speaker would prefer to avoid.

If the House doesn’t vote on the bill before recess, than the farm bill process goes into chaos. The most likely scenario would be a short-term extension of the previous farm bill—punting the process of creating a new one from scratch to the next Congress (which will likely be as friendly to the biotech industry as the current one).

However, Politico’s David Rogers reports that ag committee chair Lucas and ranking Democrat Collin Peterson (D-Minn) are pressuring the House Republican leadership to take up the bill. If they succeed and the bill passes the House and makes it to reconciliation with the Senate, the main fight will be over the depth of the SNAP cuts. In that scenario, given the biotech industry’s power to influence both Democrats and Republicans, I’d wager that these pro-biotech riders make it into law.