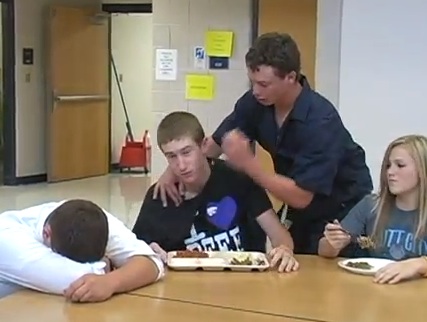 Screen shot from "We Are Hungry," a protest video by students in Kansas.

Call it the tater tot rebellion. In 2010, President Obama signed into law the Healthy, Hunger-Free Kids Act, which modestly increased federal expenditures on school lunches and also overhauled the rules that governed them. No longer would federally subsidized school lunch cafeterias act as a kind of unfettered free-enterprise zone for the food industry’s “Dinosaur Shaped Chicken Nuggets” and frozen pizzas. The new rules put limits on calories per meal and mandated that more fruits and vegetables be served. And now, according to media reports (see here and here), students nationwide are organizing strikes and social-media campaigns to protest the new rules.

When the Healthy, Hunger-Free Kids Act became law, I was disappointed that it didn’t commit more money to improving lunches. Even after the increase included in the 2010 law, school cafeterias get less than a dollar a day per student in federal funding to spend on ingredients (about two-thirds of the maximum $2.94 outlay per lunch goes to overhead and labor). How much decent food can you churn out on such budgets, especially given that so few schools have fully equipped kitchens nowadays? But if the rules could at least reduce empty calories from low-quality, health-killing added sweeteners and fats, that would at least be a positive step…right?

Well, according to the New York Times, kids are rebelling against the new lunchroom regime. Here’s the Times on how the new rules make things different:

Because the lunches must now include fruits and vegetables, those who clamor for more cheese-laden nachos may find string beans and a peach cup instead. Because of limits on fat and sodium, some of those who crave French fries get baked sweet-potato wedges. Because of calorie restrictions, meat and carbohydrate portions are smaller. Gone is 2-percent chocolate milk, replaced by skim.

And here’s a cross-section of the reaction:

Outside Pittsburgh, they are proclaiming a strike, taking to Twitter and Facebook to spread the word. In a village near Milwaukee, hundreds staged a boycott. In a small farming and ranching community in western Kansas, they have produced a parody video. And in Parsippany, N.J., the protest is six days old and counting.

Students in Kansas went so far as to launch a protest video called “We Are Hungry,” which has gotten nearly a million views on You Tube.

Right-wing politicians have stepped in to support the rebellion. Rep. Steve King (R-Iowa) recently introduced the No Hungry Kids Act, whose sole purpose is to wipe out the new rules. “For the first time in history, the USDA has set a calorie limit on school lunches,” King fumed to The Hill. “The misguided nanny state, as advanced by Michelle Obama’s ‘Healthy and Hunger Free Kids Act,’ was interpreted by [USDA] Secretary [Tom] Vilsack to be a directive that, because some kids are overweight, he would put every child on a diet. Parents know that their kids deserve all of the healthy and nutritious food they want.”

King and Rep. Tim Huelskamp (R-Kan.) have even launched a Facebook page called “Nutrition Nannies” based on the idea that “USDA’s new school lunch guidelines are leaving our children hungry.”

Of course, all of this is ridiculous. School lunches are a federal program, and the federal government has an interest in teaching kids healthy eating habits—something it has failed to do for decades now, as chicken nuggets and tater tots have invaded cafeterias. What if students organized and demanded to replace algebra class with Video Gaming 101—would it be nanny state overreaching to refuse them?

To me, the pushback against the new rules is predictable, both in the halls of Congress and in the lunchroom. Steve King is a magnet for agribusiness cash, and agribusiness would like to ensure that cafeterias continue helping form palates friendly to junky food. And of course kids are going to push back—what 10- or 16-year-old is going to react calmly when their daily French fries get snatched away and replaced with broccoli?

But schools’ mandate to teach doesn’t end at the lunchroom door. What’s on offer in the cafeteria line is more than lunch. It’s also a public vision of what’s wise to eat. For decades, schools have been teaching kids to pursue diets rich in processed junk. It’s time to reverse that. And that means not just serving healthier food, but also responding to the inevitable rebellion by teaching healthier food.

I asked Ann Cooper, director of nutrition services Boulder Valley School District, for her take on the the new rules and their reception. Cooper knows from shrill complaints about new lunchroom regimes—a self-identified “renegade lunch lady,” she improved the quality of school lunches in Berkeley, California, while serving as nutrition director there in the mid-2000s, and has repeated that feat in her current position in Boulder, Colorado. (Cooper was profiled in The New Yorker in 2006, and by me in 2007.)

“It used to be, like last year, you could serve a kid four pieces of pizza, two chocolate milks, and a cookie, and call it a day,” she said. Those days are over, because the new rules cap calories at 850 in high schools. “But that’s still a lot of calories—I don’t eat that 850 calories at lunch, and you probably don’t either.”

I asked Cooper if kids in Berkeley and Boulder had initially pushed back against her efforts to cut portion sizes and serve more fruits and vegetables. “Absolutely,” she said. There was a “lot of pain” for the first couple of years in both places when she changed things, she said. How did she change things? “It’s education, it’s presentation, it’s marketing…you have to work with the kids, work with the parents. It’s not brain surgery, it’s education,” she said. “I feel like I have to market the program more than I would if I ran a three-star restaurant,” she said. In Boulder, she has tried everything from cooking demos to Iron Chef competitions among kids. For the first couple of years, she says, students complained—but then they came around to the new menus.

I asked her if she thought the reforms would survive student and congressional backlash. “I think the real question is who’s going to be president,” she said. If Obama wins, she said, school lunches will remain on the path they’re on—and kids will adapt. If Romney wins, “we could lose every bit of momentum that we’ve gained in the last six years.”

Meanwhile, while the USDA’s new rules haven’t fully banished junk food from schools. Kids can still find it in vending machines outside the cafeteria—and in some places, they’re using those machines as a substitute for cafeteria fare, the New York Times reports.

Nicole Anthony, the cafeteria manager at one Los Angeles school, Nimitz Middle School in Huntington Park, estimated that out of the 1,800 students, almost all of whom qualify for a free or reduced-price lunch, only 1,200, “on a good day,” now eat the cafeteria’s offerings.

Ms. Anthony is not optimistic that the students will warm to their new lunches anytime soon—not as long as they can buy Flamin’ Hot Cheetos from the vending machines or brownies from the student store for lunch.

“Why would I come over here for a chicken and apple when I can get a cookie and some Gatorade and some gummies?” she said. “What would you choose?”