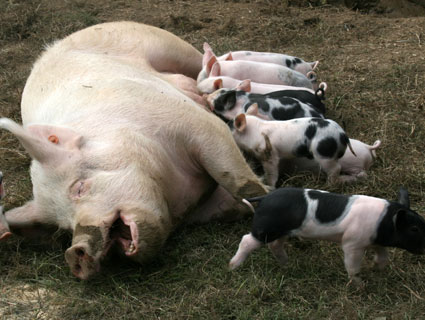 It’s no secret that chowing down on raw pork is probably not the best call, a point emphasized by the USDA and the Centers for Disease Control and Prevention. A new study by Consumer Reports drives this lesson home with sickening clarity: After testing 198 samples of raw grocery store pork loins and ground pork, it found that a full 69 percent of the samples harbored Yersinia enterocolitica, bacteria that can cause abdominal pain, diarrhea, and fever for up to 3 weeks. Salmonella, staphylococcus aureus, and listeria, all potentially sickness inducing, also appeared in 3 to 7 percent of the samples. These bacteria would hypothetically be killed off if the pork is thoroughly cooked, but there’s still the potential of spreading the bacteria while slaughtering, processing, and handling the raw meat.

Though this is within the realm of what the USDA considers safe (and inspectors don’t test for Yersinia because illness from it is rare, though cases of yersiniosis are thought to be under reported), Consumer Reports‘ more worrisome finding was that much of this bacteria was resistant to common antibiotics. Over 90 percent of the Yersinia-infected samples, when exposed to antibiotics normally effective against this bacteria, proved resistant to one or more antibiotic, and over 50 percent to two or three antibiotics. Of the 14 samples that revealed staph, 13 of them were resistant to at least one antibiotic, and of the 8 samples with salmonella, 3 were resistant to five antibiotics. The discovery adds to a growing body of evidence that the low-dose antibiotics fed to farm animals for growth are breeding a class of resistant mutant bugs more slippery and dangerous than their progenitors.

Consumer Reports also found traces of a veterinary drug, ractopamine, in 20 percent of its pork samples. Used to spur growth in pigs, ractopamine is fed to an estimated 60-80 percent of hogs raised in the US. Though it was present at levels deemed safe by the FDA, in many countries the jury’s still out about whether ractopamine is safe at all. The European Union and China require imported meat to be ractopamine-free. And US companies like Chipotle and Whole Foods refuse to serve pork raised with the drug. When USDA meat inspectors reported an increase of adverse side effects from Paylean, the drug’s brand name, the FDA requested that the drug’s manufacturer Elanco add a warning label in 2002. As reporter Helena Bottemiller exposed earlier this year, the FDA received reports of adverse side effects in more than 160,000 pigs taking ractopamine, though the agency would not confirm that the bad reactions were a result of the drug.

Representative Louise Slaughter (NY) called the results of the Consumer Reports study “simply terrifying” and criticized the FDA and food industry’s “half-measures and voluntary guidelines” as inadequate in protecting the public against the rise in antibiotic-resistant bacteria. A bill Slaughter re-introduced to Congress in 2011, the Preservation of Antibiotics for Medical Treatment Act (PAMTA), would ban using routine antibiotics on healthy animals in hopes of avoiding the proliferation of superbugs, but the bill seems to be stuck in committee for the time being.

So for now, as my colleague Tom Philpott reported back in April, the pork industry is pretty much free to regulate its own antibiotic use. So gross stories like that of antibiotic-resistant bugs carried via manure on the legs of cockroaches and flies into surrounding communities could be on the rise—meaning it’s not just bacon-guzzlers who have to be worried about what’s going into our pork.