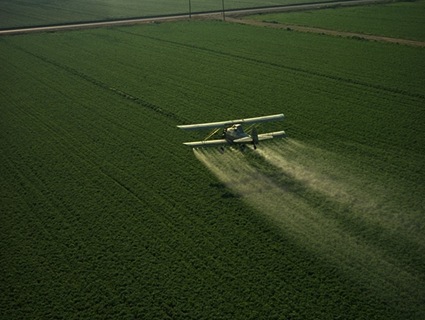 When Monsanto revolutionized agriculture with a line of genetically engineered seeds, the promise was that the technology would lower herbicide use—because farmers would have to spray less. In fact, as Washington State University researcher Chuch Benbrook has shown, just the opposite happened.

Sixteen years on, Roundup (Monsanto’s tradename for its glyphosate herbicide) has certainly killed lots of weeds. But the ones it has left standing are about as resistant to herbicide as the company’s Roundup Ready crops, which are designed to survive repeated applications of the agribusiness giant’s own Roundup herbicide.

For just one example, turn to Mississippi, where cotton, corn, and soy farmers have been using Roundup Ready seeds for years—and are now struggling to contain a new generation of super weeds, including a scourge of Italian ryegrass.

In 2005, Italian ryegrass resistant to the commonly used herbicide glyphosate was first identified in the state. Since then, it has been found in 31 Mississippi counties and is widespread throughout the Delta. This glyphosate-resistant weed emerges in the fall and grows throughout winter and early spring.

The solution: “fall residual herbicide treatments followed by spring burn-down applications, where a nonselective herbicide is applied to fields before planting.” Translation: to combat the plague of resistant Italian ryegrass, Mississippi’s cotton farmers must hit their fields with a “residual” herbicide in the fall—meaning one that hangs around in soil long enough to kill ryegrass for a while—and then come back with yet another herbicide in the spring, to make sure the job has been done.

This multi-poison approach to weed control, apparently, is what passes for “integrated pest management”—purportedly a system of low-pesticide crop protection—these days.

“The integrated pest management program we recommend uses fall residual herbicides to help reduce the overall population and numbers,” [Mississippi State University extension professor Tom] Eubank said. “Fall tillage can also reduce weed numbers, but it is generally not as effective as residual herbicides. Producers should come back in the spring or late winter with an alternative herbicide program that attacks the plant using a different mode of action.”

In lieu of crop rotation and biodiversity, the non-toxic way to control weeds, the MSU extension service promotes what the article calls a “diversified herbicide program.” And thus we get a clear look at why, since the introduction of Roundup Ready seeds in the 1990s, herbicide use has spiked.