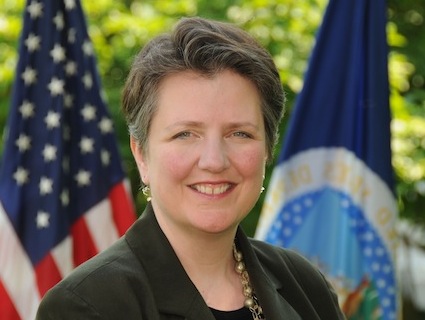 Back in 2009, when President Obama chose Kathleen Merrigan as second in command at the US Department of Agriculture, celebration erupted in sustainable-food circles. Last Thursday afternoon, the USDA announced the imminent end of Merrigan’s run as deputy secretary of ag with a terse note from USDA chief Tom Vilsack. It gave no reason for her departure, which is effective at the end of April.

For generations, the message from the US Department of Agriculture to the nation’s farmers could be summed up in the famous piece of advice offered by Ezra Taft Benson, President Dwight Eisenhower’s USDA chief: “get big or get out.” That’s why Merrigan’s tenure is so significant. Under her influence, the USDA suddenly began to urge consumers to “Know Your Farmer, Know Your Food,” and made a concerted effort to marshal USDA resources to support local and regional food systems supplied by farms of varying scales: the opposite of the globalized, monolithic system envisioned by Benson and put into place with the consent of his successors.

Even so, US farm policy, hammered out in Congress through once-every-five-year farm bills and executed by the USDA, remains largely guided by Taft’s agribusiness-friendly vision. Know Your Farmer does not represent new funding—the USDA has no power to roll out new programs—but rather the bundling together of existing programs that can be used to fund alternative food projects. And these programs are funded at pennies on the dollar compared to, say, commodity subsidies. And, true, the Obama administration has certainly had its share of cave-ins to Big Ag—none greater than its deregulation of various dodgy genetically modified crops. But as I put it in a post in 2011, Know Your Farmer represents the USDA’s “most high-profile acknowledgement since the post-war rise of industrial agriculture that alternative food systems exist, matter, and deserve support.”

The burning question about Merrigan’s departure: Was she fired, or did she quit? Every indication I had gotten since the 2012 election from Washington sources was that she hoped to stay on if her boss, Vilsack, stayed on. When President Obama announced in January that Vilsack would in fact remain ag secretary, the assumption had been that Merrigan, his deputy, would, too. It is rare, however, for deputy ag secretaries to serve two full terms.

In a statement emailed Thursday afternoon, Merrigan—a long-time champion of organic ag and who until taking her current job served as a professor of ag policy at Tufts and worked in Clinton’s USDA—cited no reason for leaving. Over the phone Friday, she was noncommittal. “It’s all been in the works for a while,” she said, adding that the spring after an election is a “natural time of transition for her position.” She also cited the “principle of diversity”—”I’ve had the chance to bring a lot of good ideas to the table here, new ways of looking at things, and I think it’s important for someone else to have that chance.” But she wouldn’t directly answer the question.

“I would not leave here if I didn’t expect the Know Your Farmer initiative to thrive and grow,” said Merrigan.

What, then, about the initiative she championed and has become most associated with, Know Your Farmer, Know Your Food? Would the initiative, which uses existing USDA programs and funding to promote the rebuilding of local and regional food systems, survive her tenure? On this, Merrigan was unequivocal: “I would not leave here if I didn’t expect the Know Your Farmer initiative to thrive and grow.” She acknowledged that the program had come under severe attack from farm-state pols who saw the KYK as a challenge to big ag, but that “we’ve gotten past that.” The attacks have subsided, she said, as farm-state pols have learned local and regional food systems aren’t just for coastal elites—they can also deliver economic benefits to farm-heavy states.

As evidence of its solid position with the USDA bureaucracy, she said that the USDA’s internal Know Your Farmer task force is now led by a “career civil servant,” as opposed to a political appointee; and long-time organic activist and farmer Mark Lipson, who has served as the USDA’s organic and sustainable agriculture policy advisor since 2010, is one of several Merrigan-associated employees who will stick around, the departing deputy secretary said.

These personnel decisions eased my immediate reaction to Merrigan’s departure—because of its suddenness and the lack of a reason given, I feared a purge of people within the department who challenge the Big Ag party line. That’s not the case. In our interview, Merrigan made the case that the theory behind Know Your Farmer—that local and regional food networks play an important role in building an economically and ecologically resilient food system—has become part of the department’s central mission and not just the pet project of a deputy secretary.

Even so, the announcement came as a surprise to many in the sustainable-food movement. “I’m still shocked by her resignation, knowing how the hundreds of thousands of farmers, managers, and volunteers that make farmers markets possible across the US have benefited from her commitment to truly viable food systems that both grow rural economies and get the freshest most nutritious food possible onto more plates,” Stacy Miller, project director at the Farmers Market Coalition, told me.

“In an agency that too often defaults to the preferences of industrial agriculture and big food companies, Kathleen has been the vital source of fresh ideas, action, and hope in the daunting work of fixing America’s broken food system,” Ken Cook, president of the ag policy watchdog Environmental Working Group (EWG), said in a statement. “With Kathleen stepping down, I find myself much more concerned about the administration’s next moves in food and agriculture policy than I am about Kathleen’s.”