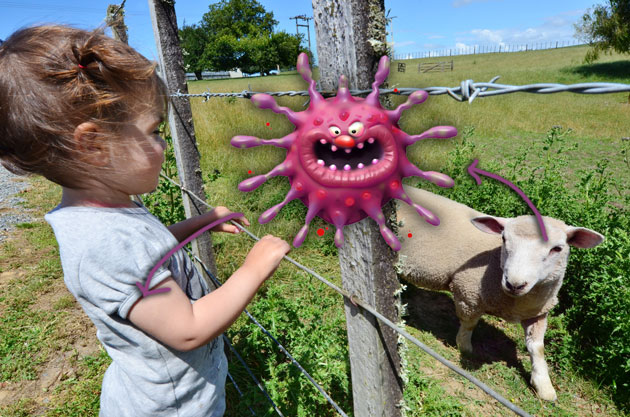 For decades, the meat industry has denied any problem with its reliance on routine, everyday antibiotic use for the nation’s chickens, cows, and pigs. But it’s a bit like a drunk denying an alcohol problem while leaning on a barstool for support. Antibiotic use on livestock farms has surged in recent years—from 20 million pounds annually in 2003 to nearly 30 million pounds in 2011.

Over the same period, the entire US human population has consumed less than 8 million pounds per year, meaning that livestock farms now suck in around 80 percent of the antibiotics consumed in the United States. Meanwhile, the industry routinely churns out meat containing an array of antibiotic-resistant pathogens.

As former FDA commissioner David A. Kessler recently put it in a New York Times op-ed, “rather than healing sick animals, these drugs are often fed to animals at low levels to make them grow faster and to suppress diseases that arise because they live in dangerously close quarters on top of one another’s waste.” And feeding antibiotics to livestock at low levels may “do the most harm,” Kessler continued, because it provides a perfect incubation ground for the generation of antibiotic-resistant microbes.

The meat industry’s retort to all of this is, essentially: And the problem is? The websites of the major industry trade groups—the American Meat Institute, the National Chicken Council, the National Pork Producers Council—all insist current antibiotic practices are “safe.” The main reason they can claim this with a straight face is that while scientists have long suspected that drug-resistant pathogens can jump from antibiotic-treated animals to humans, it’s been notoriously difficult to prove. The obstacle is ethics: You wouldn’t want to extract, say, antibiotic-resistant salmonella from a turkey and inject it into a person just to see what happens. The risk of what the Centers for Disease Control and Prevention politely calls “treatment failure,” i.e., death, would be too great.

But this decades-old industry fig leaf is fraying fast. The latest: a gene-sequencing study from Denmark that documents two cases of the movement of MRSA, an often-deadly, antibiotic-resistant staph infection, from farm animals to people. The excellent “scary disease” reporter Maryn McKenna recently broke down the science in lucid detail:

There is very little MRSA, drug-resistant staph, in Denmark, so little that any occurrence is considered a notifiable disease—meaning that, when a case is diagnosed, public health authorities must be told. One farmer, a 53-year-old woman who kept two horses and two cows, was diagnosed with a MRSA blood infection and also had the organism in her nostrils. The other, a 69-year-old woman who had a flock of 10 sheep, had a wound that had become infected with MRSA. When their cases came to light…they were recognized as a new MRSA strain that has been reported in cattle and so Danish researchers went out to check the animals on both farms. One cow, and three sheep, were carrying the new strain.

After analyzing the mutations of the MRSA strains in the women and the animals, the researchers concluded that it had been circulating among the livestock before jumping to the people. The researchers’ analysis is “so fine-grained,” McKenna writes, that it “seems to me to be difficult to challenge.”

The Danish study comes on the heels a 2012 paper by a consortium of US and European researchers, which used gene sequencing to show that another common strain of MRSA originated in humans as a common staph infection, jumped to livestock, where it evolved resistance to the common antibiotics tetracycline and methicillin, and then jumped back to humans. Of course, you can also contract antibiotic-resistant pathogens through contact with raw meat—as, for example, more than 100 people did when the agribusiness giant Cargill sent out tens of millions of pounds of ground turkey tainted with antibiotic-resistant salmonella in 2011.

How much of the 30 million pounds of antibiotics goes to treating sick animals—and how much goes to making them grow faster? Industry won’t say.

These studies shine a hard light on another key industry claim: that the public needn’t worry about antibiotic use on farms because, as the American Meat Institute puts it, the “FDA has extensive guidelines about how antibiotics must be used to ensure safety for both people and animals.”

It’s true that the FDA has limited the use of a few specific antibiotics on farms—for example, its move last year to place restrictions on the cephalosporin family of antibiotics, in order to “preserve the effectiveness of cephalosporin drugs for treating disease in humans.” (Cephalosporins are used to treat common respiratory-tract infections like pneumonia, strep throat, tonsillitis, and bronchitis, as well as urinary-tract infections.) But as I showed, the industry had already mostly phased out cephalosporins—and dramatically ramped up use of tetracyclines and penicillins, which are both also quite important in human medicine. So the FDA was restricting something the industry had already largely abandoned, and doing nothing to impede the flow of other vital antibiotics to factory farms.

Indeed, exceptions like cephalosporin to the side, the FDA offers only “voluntary” guidelines on “judicious” use. In reality, antibiotic use is on feedlots is a free-for-all, as this Pew analysis shows.

Moreover, the FDA operates with very little information about how the gusher of antibiotics entering factory farms is being used. Both the animal-pharmaceutical industry and the livestock industry treat most data on antibiotic use as a tightly held secret. How much of the 30 million pounds of antibiotics now used on factory farms goes to treating sick animals—and how much goes to making them grow faster? And how much is going to the various species—chickens, pigs, and cows? None of that is public information, as Kessler, the former FDA commissioner, showed in his recent Times op-ed.

And of course without it, the FDA has no way of knowing whether its voluntary “judicious use” targets are being met. Depressingly, Kessler’s piece shows how both Congress and the FDA have bowed to industry pressure and neglected to demand more extensive information.