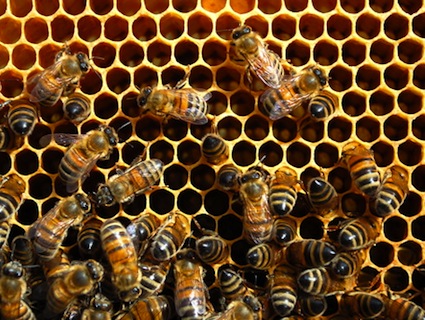 On Monday, the European Commission voted to place a two-year moratorium on most uses of neonicotinoid pesticides, which are a widely used class of chemicals suspected of contributing to a severe global decline in honeybee health.

In the wake of Europe’s decisive action, the US Environmental Protection Agency dithered. Well, it did release a joint report with the US Department of Agriculture on Thursday, generated from a “National Honey Bee Health Stakeholder Conference” the two agencies held last fall. The report fingered no single culprit behind colony collapse disorder, the name for the steep annual bee die-offs that have been stumping beekeepers since 2006. Instead, it pointed to a “complex set of stressors and pathogens,” including poor nutrition (mainly from loss of flowering weeds due to increased herbicide use), viruses, gut parasites, and, yes, pesticides. But it includes a summary of a presentation by USDA scientist Jeff Pettis noting that “several studies” have shown that low-level exposure to neonics make bees more vulnerable to the common gut parasite Nosema. (Pettis himself is the coauthor of one of those studies.)

Yet, as Natural Resources Defense Council senior scientist Jennifer Sass put it in a Thursday blog post, the joint EPA/USDA report limits itself to “recommendations about best management practices and technical advancements for applying pesticides to reduce dust,” while avoiding “recommendations that would reduce the overall sales and profits for chemical makers.”

Nor does the report express much urgency; it promises an “action plan [that] will outline major priorities to be addressed in the next 5-10 years.”

In the United States, neonic-treated crops cover a land mass equivalent to as much as twice the size of California.

Meanwhile, the European Commission’s decisive action came amid what the Guardian called a “fierce behind-the-scenes campaign” to stop it from Syngenta and Bayer, the Europe-based chemical giants that market them. The move was prompted by a January report by the European Food Safety Authority, which identified “high acute risks” for bees from exposure to neonic-treated crops like corn and sunflower. And studies from independent researchers implicating neonics in declining bee health have mounted.

Even before the decision, France, Italy, Slovenia, and Bayer’s home country, Germany, had all suspend use of the chemicals pending more research on bee health. Now neonics will face severe restriction in all 27 European Union countries for two-year period starting December 1, 2013, during which time the commission will continue its assessment of their impact.

The move trains a harsh light on the EPA, which approved the chemicals based on what its own scientists have called flawed research and is currently reviewing them in light of the threat to bees and other pollinators. Earlier this month, an agency spokesperson told CBS News that the review would take five years—meaning that they’ll continue to be used widely on farmland in the US during that period. As I reported a while back, neonic-treated crops cover between 150 million to 200 million acres of farmland in the US each year—a land mass equivalent to as much as twice the size of California.

I contacted the EPA to ask whether the EC decision might speed the agency’s timeline on reassessing neonics and their threat to bees. The response, in an emailed statement: “At this time, the data available to the EPA do not support a moratorium.” The time frame for completing the reassessment remains in place, the statement added, with this caveat: “If at any time the EPA determines there are urgent human and/or environmental risks from pesticide exposures that require prompt attention, the agency will take appropriate regulatory action, regardless of the registration review status of that pesticide.”