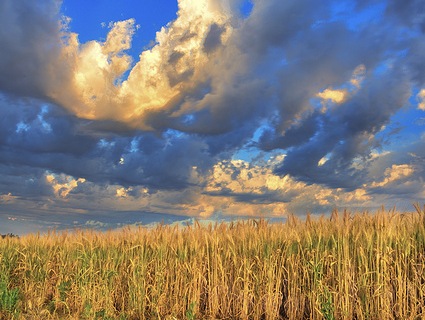 One of the four major US crops—corn, soybeans, hay (alfalfa), and wheat—is not like the others.

For one, wheat is mainly consumed directly by people, while the others are mostly used as animal feed. Its status as people food—the stuff of bread, the staff of life—probably explains why wheat is different from the other three in another way: It’s also the only one that genetically modified Monsanto seed giant hasn’t turned into a cash cow. The company has made massive profits churning out corn, soy, and (most recently) alfalfa seeds genetically altered to withstand doses of its own herbicide, Roundup. But the company has never commercialized a GM wheat variety—and stopped trying back in 2004, largely because of consumer pushback against directly consuming a GM crop. And thank goodness, too, because Roundup Ready technology is now failing, giving rise to a plague of herbicide resistant weeds and a gusher of toxic herbicides.

Wheat’s non-GMO status is why the Internet went berserk when the US Department of Agriculture revealed Wednesday that Roundup Ready wheat had sprouted up on a farm in Oregon. According to the USDA, a farmer discovered the plants growing in a place they shouldn’t have been and tried unsuccessfully to kill them with Roundup. Oops. USDA testing confirmed that the rogue wheat was the same experimental Roundup Ready variety that Monsanto had last been approved to test in Oregon in 2001.

Many countries accept US-grown GM corn and soy for animal feed. But no country on Earth has approved the sale of GM wheat.

The revelation had immediate trade implications. About half the overall US wheat crop gets exported—and Oregon’s wheat farmers export 90 percent of their output. Many countries accept US-grown GM corn and soy for animal feed. But as the USDA noted, no country on Earth has approved the sale of GM wheat. And if Roundup Ready wheat is growing on one farm, our trading partners might legitimately ask, what guarantee is there that it’s not growing on others?  Already, Japan has responded by suspending imports of US wheat, Bloomberg reports.

Maximizing exports has always been a main priority of the Obama Administration’s ag policy, and, the USDA is scrambling to investigate the extent to which Roundup Ready wheat has entered the food supply, no doubt hoping to stave off a full-on trade crisis. “We are taking this very seriously,” a USDA official told Bloomberg. “We have a very active investigation going on in several states in the western US.”

Meanwhile, the question of how those GM seeds found their way onto that Oregon farm—more than a decade after the state’s last GM wheat trials—looms. Wheat can transfer genes from one field to another pretty easily through cross-pollination. As Marcia Ishii-Eiteman, senior scientist of Pesticide Action Network of North America, put it in a statement, “once released into the environment, the GE genie does not willingly go back into the bottle.” I’ll be eagerly awaiting updates as the USDA continues its investigations.