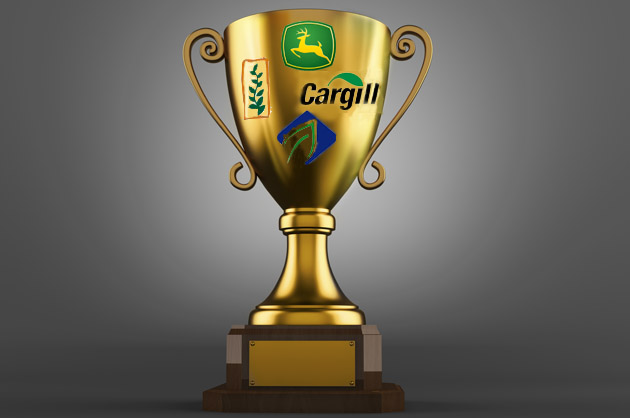 Update: earlier today, the 2013 World Food Prize was awarded to three scientists: Marc Van Monatgu from Belgium, Mary-Dell Chilton of the US and Robert T. Fraley, also of the US. Fraley is an executive vice president chief technology officer at Monsanto. A statement on the announcement from the World Food Prize Foundation can be found here.

Today Secretary of State John Kerry will announce the recipient of the quarter-million-dollar World Food Prize. Sometimes called “the Nobel Prize of food,” the award has been handed out yearly since 1987 to “outstanding individuals who have made vital contributions to improving the quality, quantity or availability of food throughout the world,” according to the website of its namesake foundation. Past winners have included agricultural scientists and presidents of developing nations who have made strides toward growing more food in their countries.

This is the 10th year that the State Department has hosted the World Food Prize’s announcement ceremony; according to a Department press release, the event is intended to showcase “the administration’s dedication to improving lives; counteracting suffering; and focusing on the role that science, technology and policy play in reducing hunger and under-nutrition.” But while the US government’s involvement might suggest that the prize is a neutral barometer of agricultural excellence, funders of the foundation which backs it have a vested interest in promoting industrialized farming around the world. In fact, many of the World Food Prize’s major donors are among the biggest names in agribusiness today.

Out of 125 donors who contributed more than $500 between fiscal years 2009 and 2011 (the years for which the foundation’s tax records are most readily available), 26 were either agribusiness or charities directly affiliated with agribusiness. Together, donations from these companies amounted to more than 28 percent of funds raised for that period, a Mother Jones analysis has found. The combined support of ADM, Cargill, Monsanto, and General Mills alone for this period came to more than a half million dollars.

Powerful, policy-driving charities are also among the prize’s top backers. The Gates Foundation and the Rockefeller Foundation, whose mutual efforts launched the Alliance for a Green Revolution in Africa (AGRA) in 2006—made combined donations worth $1.93 million between 2009 and 2011.

The World Food Prize’s connections to the US government also run deep. In 2004, Congress declared October 16 of that year (already known as World Food Day) “World Food Prize Day.” Four years later, the US Department of Agriculture and the World Prize Foundation formalized their relationship, allowing the two organizations to “consult regularly together,” according to Kenneth Quinn, a former US ambassador to Cambodia and the Foundation’s president.

In 2010, two  recipients of the World Food Prize began serving on a policy advisory committee for DuPont.

In recent years, many World Food Prize recipients have been champions of exactly the kind of industrial-scale agriculture that is the livelihood of the award’s corporate backers. In a New York Times op-ed from 2009, Per Pinstrup-Andersen, the prize’s 2001 laureate, blasted critics of industrial agriculture, writing that “[m]isguided, anti-science ideology and failure by governments to prioritize agricultural and rural development in developing countries brought us the food crisis.”

The next year, Jo Luck and Pedro Sanchez, who won the prize in 2010 and 2002, respectively, began serving on a policy advisory committee for DuPont. In 2011, the ex-Ghanaian president John Kufuor was awarded the prize for implementing “major economic and educational policies that increased the quality and quantity of food to Ghanaians.” Kufuor’s leadership also saw consolidation of the agriculture industry and increased investment from US agribusiness.

So why would the US government want to align itself with the World Food Prize? Several reasons: Ever since the 2007-08 food price spike that saw riots in cities throughout the developing world, the Obama administration has been ramping up agricultural development as both a means of third-world poverty alleviation and a business opportunity for Americans.

By the end of 2012, through a program called Feed the Future, the US government had disbursed more than $1 billion of $3.7 billion Congress had dedicated to “food security” initiatives in developing countries. But from its conception, Feed the Future wasn’t just intended to help the world’s poor. As Obama himself put it in May 2012 at the official unveiling of a related initiative, the New Alliance for Food Security and Nutrition, the idea behind this massive investment in agriculture abroad was to make poor countries—especially countries in Africa—more attractive to foreign agribusiness. African governments would “take the lead,” he said, “by making tough reforms and attracting investment.”

Yet as my colleague Tom Philpott has noted many times, considerable research has found that exporting America’s agricultural practices to the third world may neither be the best investment in their resources, nor the path to food security.