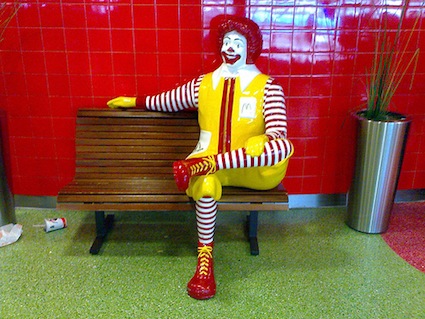 Since I last knocked heads with The Atlantic’s David Freedman over Big Food and its potential to “end obesity”—see his piece, my response, his (odd) response to my response, our joint appearance on a Minnesota Public Radio show, and one more follow-up by me—there has been more fast food news than I can keep up with, most of it involving McDonald’s, a company Freedman places at the vanguard of the anti-obesity effort.

The first item involves wages. It doesn’t seem to have occurred to Freedman that one way Big Food contributes to our national weight problem is by paying its vast army of workers a pittance. Poverty is heavily associated with obesity and other chronic health conditions. The industry profits by holding costs down, and it does that in part by paying as little as possible. A 2012 analysis by the Food Chain Workers Alliance found that 86 percent of the 20 million people who work within the food chain—that’s a sixth of the overall US workforce—bring home less than a living wage. Food-system workers are 50 percent more likely to rely on food stamp (SNAP) benefits than the overall working population, the report found. Not surprisingly, the food-system workforce is getting restive—hence recent strikes by Walmart workers, as well as walk-offs by fast-food employees in New York City,  Detroit, Seattle, and St. Louis and fast-food/retail worker strikes in Chicago and Milwaukee. Fast-food workers in seven cities plan to strike next week.

Perhaps in response to such mounting pressures, McDonald’s was recently moved to gift its employees with a “Practical Money Skills Budget Journal,” “brought to you by Visa Inc. and Wealth Watchers International.” Get a load of the “sample monthly budget,” which has generated much hilarity across the internet: 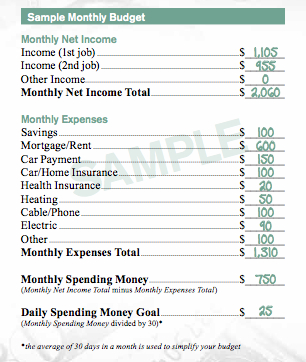 The most practical tip: In order to obtain a living wage working at McDonald’s 35 hours per week (monthly income: $1,105), get a second job. Least practical facet: as MSNBC’s Maria Perez notes, it “leaves out necessary expenditures like food, child care, clothes and gas.” Oops. All of that, evidently, falls under the “daily spending money goal” line—a whopping $25 per day. As for health insurance, the suggested monthly allotment of $20 won’t even cover the $14 per week McDonald’s itself charges employees, according to The Wall Street Journal. (For a different take on McDonald’s budget planner, read Kevin Drum’s post.)

While the exercise is unlikely do much to dispel employee outrage over working-poor wages, it did inspire a funny riff from the great Colbert:

Then there’s the plight of the new, “healthy” sandwich Freedman hails in his Atlantic piece, the Premium McWrap, which, he gushes, is “crammed with grilled chicken and spring mix, and given a light coating of ranch dressing amped up with rice vinegar.” This alleged bulwark against obesity is central to the company’s push to attract customers between the ages of 18 and 32—a demographic group that has been fleeing the Golden Arches—reports Businessweek, citing an internal company memo.

Evidently, the McWrap, which launched in April, is a McDud. In its latest earnings report, “there was no triumphant talk about sales of the McWrap,” reports Wonkblog’s Lydia DePillis. If it had flown off the shelves, McDonald’s execs would likely have hailed it in what was otherwise a dismal quarterly report. DePillis offers an equally dismal analysis of the company’s business situation:

Those who can afford to pay a little more are already moving to newer, fast-casual concepts, like Chipotle and Panera, or sit-down experiences that have gotten more cost-competitive, like Ruby Tuesday’s and Applebee’s. Those who can’t are reasonably well served by microwaving something at home, rather than going out for a fish filet.

Unable to attract millennials, DePillis concludes, the company is “boxed in” to serving hard-luck baby boomers, “many of whom are now among the long-term unemployed or facing shrinking retirement accounts.”

Unzipped, the thing practically lunges at me. It is 1) huge and 2) ungainly. But there’s a flutter of red leaf lettuce showing like a petticoat somewhere in there. Signaling “fresh” and “healthy,” it is surely its first appearance at the fast food burger joint. I take a bite. My desire to be photographed with the cardboard cutout disappears. The wrap, it turns out, is a plain flour tortilla, cold and leathery. Chicken breast? It is, I guess, if they say so. There are some vegetables — lettuce, pale tomatoes, cucumbers, even a shred of radicchio(!) — but even more sauce. And because this is McDonald’s, it’s sweet, which is about the only thing giving this bomb some flavor. There’s the bacon, of course, in the Chicken & Bacon version, and also some grated yellow cheese substance called Cheddar that tastes ever so faintly of cheese and a big dollop of creamy garlic sauce that mimics watered down mayonnaise.

Making fresh food that tastes good requires at least a little time—and like money, time isn’t something McDonald’s lavishes upon its workers. As Businessweek put it, “McDonald’s employees are supposed to be able to make a wrap in 60 seconds or less. …  A minute is a long time at McDonald’s, but that’s the point. It’s supposed to be food made by humans.”