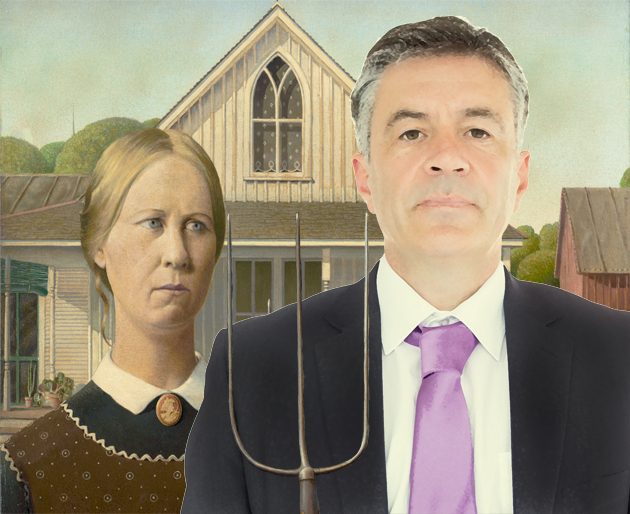 Goaded on by small-is-good gospel, plenty of people have adopted a Manichean view of modern US farming: large, soulless corporate enterprises on one side, human-scale, artisanal operations on the other.

Take, for example, Chipotle’s much-discussed new web ad, which tugs at the heartstrings by painting a haunting picture of a small-time farmer who finds himself working for—and then competing against—a fictional industrial-farming behemoth.

Reality is a lot more complicated. While there are plenty of mega-corporations in the food industry, they rarely do the actual farming themselves.

A USDA study released in August found that 96.4 percent of US crop farms are “family farms,” or “ones in which the principal operator, and people related to the principal operator by blood or marriage, own more than half.” That number doesn’t leave a lot of room for corporate farmers, does it?

The story is a bit—but not that much—different in meat production. Pork, and pork only, actually has corporations raising significant numbers of livestock. Here are the largest hog producers in the United States, lifted from an interesting 2010 paper by Tufts University researchers Tim Wise and Sarah Trist: 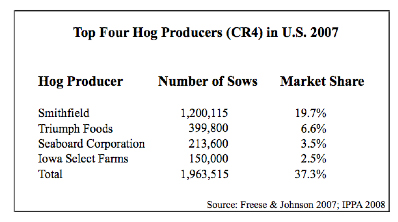 Smithfield, recently bought by the Chinese conglomerate Shuanghui International (in a deal just approved by Smithfield’s shareholders), is obviously a massive, globe-spanning corporation. Not only does it raise about 1 in 5 American hogs, it also has a 31 percent share of the hog-processing market, Wise and Trist show. When Smithfield directly raises 1.2 million hogs per year, that’s corporate farming.

But after Smithfield, things change quickly. As the above chart shows, the nation’s fourth-largest hog producer, Iowa Select Farms, has a 2.5 percent market share. Yes, that’s a lot of hogs—150,000 per year, to be exact—but the vast majority of America’s other 70,000 pig farms tend to be family-owned operations. It’s true that they usually operate under contract with mega-processors like Smithfield and peers like Tyson and JBS. But these aren’t corporate-owned farms.

In beef, the last stage of conventional cow production—fattening them for slaughter—is largely dominated by big players. Here (from a 2010 paper by Texas Tech University ag scientist M. L. Galyean) are the biggest operators of feedlots—those massive, infamous pens where cows spend their last days chomping on corn and soy-based feed, laced with dodgy additives:

And here are the dominant processors, the corporations that slaughter the fattened cows and cut them into beef (note how Cargill and JBS appear on both lists): 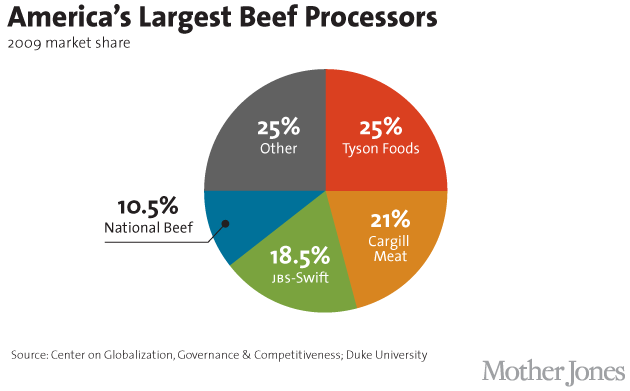 But again, the farms that supply the feedlots—that raise the calves until they are ready to be fattened in those corporate-run confined finishing operations—are almost exclusively family-owned businesses, as this 2011 USDA paper shows. And there are more than 700,000 of them.

As for chicken, the USDA counts more than 17,000 operations producing “broilers,” or meat chickens. Very few of them are owned by companies like Tyson, Pilgrim’s Pride (a JBS subsidiary), or Perdue—the mega-processors that slaughter and package most birds. According to the USDA, farms directly owned by those giants account for just 1 percent of total broiler production. The bulk of the rest are family-owned, albeit working under contract to a big processor:

So what’s going on here—why is the perception of “corporate farming” so widespread when actually almost all of the country’s food is being grown or raised by family-owned operations?

It might have something to do with the fact that corporate agribusiness is indeed very real—it’s just that it has carved out the most profitable parts of food production for itself, while leaving the dirty, uncertain work of farming for others.

The reality is that farming itself is generally a terrible business. There’s much more—and much easier—money to be made by selling farmers the raw materials of their trade—like seeds, fertilizer, or livestock feed. And there’s also plenty of money in buying farmers’ output cheap (say, corn or hogs) and selling it dear (as, say, pork chops or high-fructose corn syrup). In his excellent 2004 book Against the Grain: How Agriculture Has Hijacked Civilization, Richard Manning pungently describes the situation:

A farm scholar once asked an agribusiness executive when his corporation would simply take over the farms. The exec said that it would be dumb for the corporation to do so, in that it is not free to exploit its employees to the degree that farmers are willing to exploit themselves.