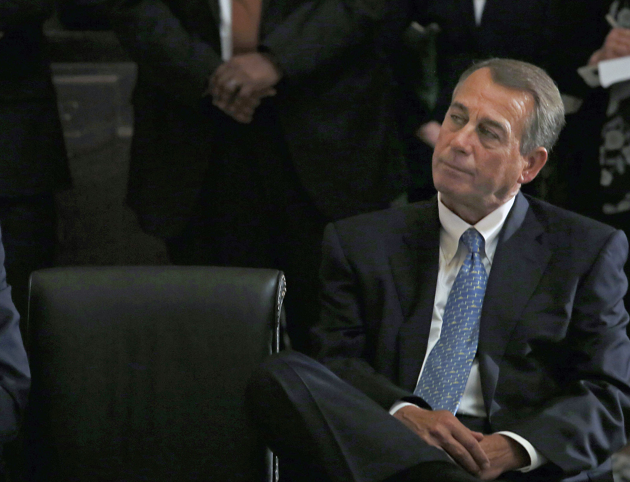 Over the past month, the House and Senate have been working to come up with a compromise farm bill—the five-year piece of legislation that funds agriculture and nutrition programs. The main sticking point is the level of cuts to the food stamp program. House Republicans want to cut $40 billion from the program, while the Senate wants to trim $4 billion. Last week, the talks fell apart, and the two sides are fighting over why.

The Democratic aide says the joint House-Senate panel that is trying to work out a deal presented Boehner with a few proposals that contained food stamps levels close to what the Senate wants. Even though Rep. Frank Lucas (R-Okla.)—the chairman of the House agriculture committee and a top member of the compromise panel—was willing to give a lot of ground to the Senate on food stamps, he says, Boehner rejected the proposals. “Boehner is playing spoiler,” he adds. “That’s why [negotiations] fell apart.”

Another source familiar with the negotiations echoes the Dem aide’s claim, saying that the House leadership has Lucas on a tight leash. Sen. Tom Harkin (D-Iowa), who is on the compromise committee, told Congressional Quarterly the same thing last week. “I’m hearing that the speaker still keeps inserting his people into the process,” and that House members on the farm bill compromise panel “have to go and check with the speaker’s people [who] say they want this and this and this. I hear that’s one of our major problems.”

But a spokesman for Boehner says the assertion that Boehner shot down the food stamps proposals “is absurd.” He adds that “the Speaker has full confidence” in Lucas and the rest of the House GOP team that is working out a compromise farm bill. On Friday, Lucas said negotiations stalled because of differences over the crop subsidy provisions in the legislation.

If Boehner did reject the compromise committee’s food-stamp proposals, he adhered to something called the Hastert rule—an informal measure used to limit the power of the minority—which says that a “majority of the majority” party must support a bill before it is brought up for a vote. It was first used by former House speaker Dennis Hastert in the mid-90s.

Boehner may not use the Hastert rule on the farm bill, but time is running out to reach an agreement. The two sides were supposed to have a final compromise bill on the House floor by December 13. A Senate agriculture committee aide says that negotiations are technically still ongoing, but the deadline may be pushed into next year. The farm bill is already more than a year behind schedule.

If fruitless negotiations end up delaying a farm bill for another year, Democrats may be the unlikley winners. Some Dems have been considering voting against any compromise farm bill in order to kill the bill. If that happens, food stamps would continue to be funded at current levels.