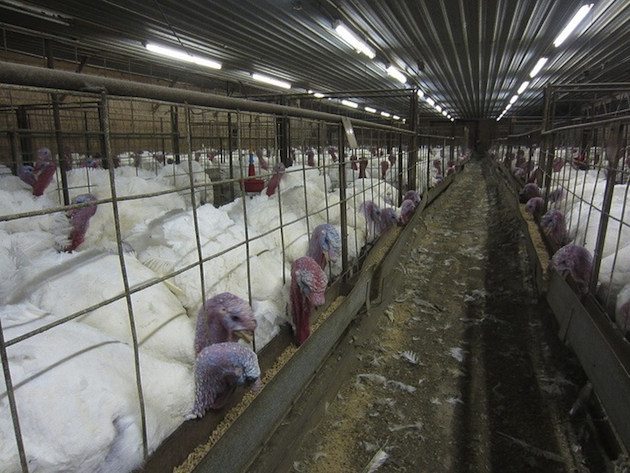 In Wisconsin, you can buy a Butterball turkey for $1.38 per pound, reports Nami Moon Farms, on its blog. That’s about $16.50 for a 12-pound bird—a Thanksgiving main course for eight, plus “ample leftovers.” The Nami Moon folks calculate that if they tried to compete with Butterball on price in the their pasture-based turkey system, they’d lose $36.44 per bird—representing a loss of $1,822 for the 50 birds they raise.

Now, a conventional economist would likely conclude from this information that Butterball represents the height of industrial efficiency, while Nami Moon is an anachronism. But the low price  doesn’t just reflect efficiency. It also, as the veteran agriculture reporter Christopher Leonard showed in a Friday Washington Post op-ed, reveals power—specifically, the power to exploit farmers.

“Just four corporations—Cargill, Hormel, Butterball and Farbest Foods—produce more than half of the turkey in the United States, a level of concentration unthinkable just a few decades ago,” Leonard writes. Leonard writes that the Big Turkey operates on the chicken industry’s model. Here’s how it works. 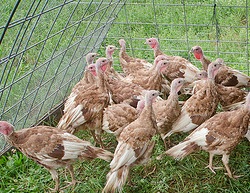 Turkeys graze on organic pastures and live in pens that protect them from predators, direct sun light, and wind at Nick’s Organic Farm in Maryland. USDA/Flickr

Here is what modern poultry farming looks like: A farmer will borrow several hundred thousand dollars (or in some cases millions) to build industrial barns where the birds will be raised. The birds themselves are never bought or sold on an open market; a poultry company delivers chicks to the farm and picks them up about six weeks later when the birds are big enough to slaughter. Farmers are kept on short-term contracts with the big poultry companies and live in fear that they’ll be dropped.

As a result, large processors manage to soak up most of the profits from large-scale turkey production, while “farmers are living on the edge of bankruptcy,” he reports. According to these recent USDA numbers show (Excel file), turkey farmers’ feed costs has risen by a factor of 2.5 since 2000, mainly because of the ethanol boom, while the price they get for their finished birds has risen only by 1.5 times. Meanwhile, Leanard shows, the meat giants’ profit margins have expanded in recent years.

Of course, the power to squeeze farmers isn’t the only advantage Big Turkey holds over small operators like Nami Moon. As I’ve shown before, the meat industry also boasts a formidable ability to prevent regulators from requiring them to clean up their messes. With 15,000 birds in a typical turkey facility—with an average of three flocks per year, that’s a lot of concentrated turkey shit. At these mammoth operations, the welfare of the confined birds is  (sometimes literally) stomped on. On the Tuesday before Thanksgiving, yet another undercover video revealed horrific abuse on a factory turkey farm.

Then, of course, there are working conditions at the industry’s vast slaughterhouses—staffed by low-wage workers who endure “debilitating pain in their hands, gnarled fingers, chemical burns, and respiratory problems,” as the Southern Poverty Law Center put it in a recent report. Finally, there’s the industry’s reliance on low doses of antibiotics to keep animals alive and growing fast under cramped, unsanitary conditions, which the Centers for Disease Control has bluntly acknowledged contributes to antibiotic-resistant pathogens that threaten people.