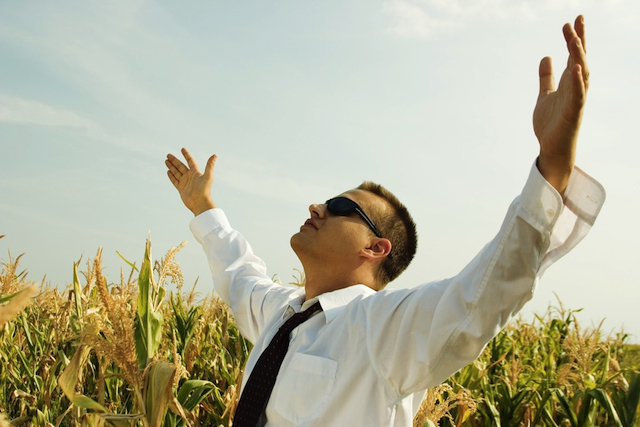 In a recent piece, I speculated that Monsanto might be moving away from its focus on genetically modified crops. I contacted the Monsanto press office to get the company’s perspective, but didn’t connect by deadline time. Since then, I’ve been in touch with Charla Lord, a Monsanto press officer. She confirmed that in its vegetable division, Monsanto relies on conventional breeding and not GMOs, because “breeding helps us bring more products to market faster and is more cost effective.”

As for my speculation that Monsanto was moving in a similar direction in its main business—big commodity crops like corn, soy and cotton—she pointed to the company’s recently released 2014 Research and Development Pipeline, which lists four “platforms” for delivering new technology to farmers: “breeding, biotechnology, agronomics and new technology platforms.” So genetic modification—i.e, “biotechnology”—is just one of the four. She also directed me to a replay of Monsanto’s Jan. 8 conference call on its latest quarterly financial report. In it, a Monsanto exec made this remark on the company’s new-products pipeline.

Some of the most exciting advances are coming from our new platforms. … We are really entering a new era where we expect farmers will see waves of technology that build on each other in a total system in the seed, in the bag, and in the field.

The pipeline itself paints a compelling picture of where this industry is going. Increasingly, we are moving beyond farmers making due with disconnected input components and we are on the leading edge of giving farmers real, integrated systems in their fields. Think about it. You start with the seed that is capable of delivering more yield than at any other point in the history and then we protect that with cutting-edge traits embedded in the seeds. Wrap around that chemical and microbial seed treatments that fend off disease and increase the health of the plant, and then utilize sophisticated algorithms to plant and position all the inputs meter by meter across the field. We are talking about a prescription agriculture that looks a lot like individually personalized medicine and that is how we are going to drive yield and productivity. You can see all the elements coming together today in waves that build on each other and which drive the opportunity for our farmer customers and our company.

Lord said that all this talk about new platforms shouldn’t be read as a move away from GMOs—the other techniques “augment” GMOs in Monsanto’s R&D work, but don’t represent a “tradeoff,” i.e., they don’t displace GMOs. Fair enough. But this still sounds to me like a company that’s diversifying away from GM technology—or at least one that’s trying to.