The chemical compound that gives some sodas a caramel-brown color could be a carcinogen—and according to a new study by Consumer Reports, it’s in many popular soft drinks at levels that exceed what many experts consider safe. Between April and December of 2013, researchers tested 110 bottles of various brands of soda for the 4-methylimidazole, or 4-MeI for short. They found the highest levels of the substance in Goya Malta, a malt-flavored soda popular in Latin American communities, and in various Pepsi products: 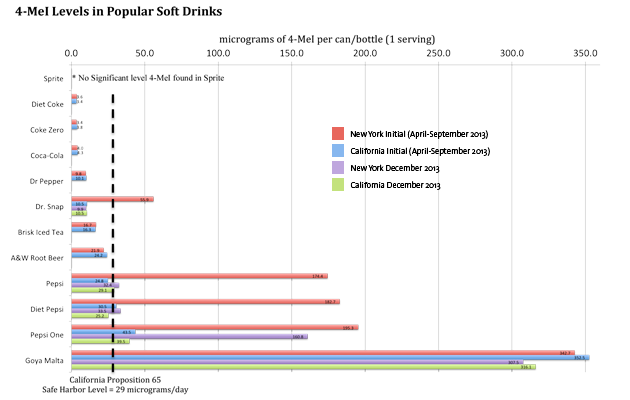 Click for a larger version. Courtesy of Consumer Reports

4-MeI is not federally regulated, but the International Agency for Research on Cancer lists it as a potential carcinogen (PDF). In California, products that expose consumers to more than 29 micrograms of 4-MeI are supposed to have a warning label, according to the state’s Proposition 65—yet none of the sodas that the group tested carried such a label. Dr. Urvashi Rangan, a toxicologist and executive director of the Consumer Reports Food Safety and Sustainability Center, believes that one reason for the New York samples’ relatively high levels of 4-MeI might be that New York doesn’t have a similar warning-label rule.

The researchers found that the Coca-Cola products had relatively low levels of 4-MeI. On the other hand, some of the samples of Dr. Snap, a soda sold at Whole Foods with a “natural” label, had levels that exceeded the California warning-label threshold.

PepsiCo representatives told Consumer Reports that they don’t attach the warning label to their products in California because their research shows that consumers drink only about a third of a can of their products a day, on average—an amount that contains less than 29 micrograms of 4-MeI. The other brands whose products Consumer Reports tested have not yet responded to the findings.

Rangan notes that 4-MeI is present in some foods as well: barbecue sauces, soups, imitation pancake syrup, gravy, and canned mushrooms, among others. While Consumer Reports is urging the FDA to regulate 4-MeI, in the meantime, consumers should consider avoiding foods and beverages with caramel color, Rangan says. “We just don’t think coloring your food brown should give you cancer.”