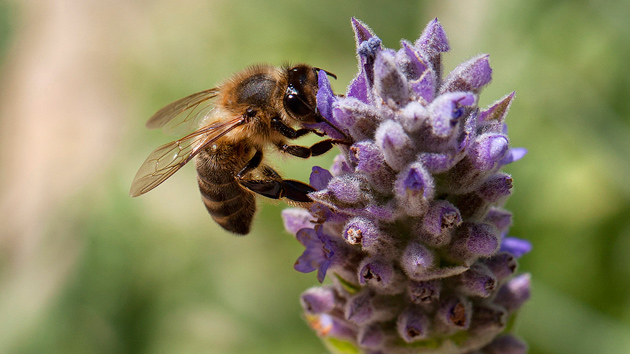 In the classic board game Clue, murder mysteries have clear solutions: say, Col. Mustard with the candlestick in the dining room. In the stark recent declines of honeybees and other pollinators, however, the situation is murkier.

We’ve put bees through a lot. They have to deal with nasty parasite, the varroa mite, which didn’t make its way to the United States until the late 1980s. They also have to deal with pesticides specifically designed to target those mites (called, yes, miticides). Over the winter, bees in commercial hives often live not on their own honey, as they have evolved to do, but rather a cheap substitute: high-fructose corn syrup. And finally, they are confronted with a range of pathogens.

Over the past month, the dossiers on two of those suspects got a little thicker. In the January issue of the peer-reviewed journal Ecotoxicology, UK researchers delivered yet more evidence that a widely used pesticide class called neonicotinoids might play a decisive role in declining bee health. They fed one set of bumblebees pollen and sugar water containing very low levels a neonic called imidacloprid. The team let the dosed bees forage in a field and compared their pollen-gathering performance to those of an un-dosed control group.

The results: The imidacloprid-exposed bees were much worse at gathering pollen. They brought back pollen on 40 percent of their trips, vs. 63 percent for the control group. And when the dosed bees did manage to snag pollen, they brought back on average 31 percent less than their un-dosed peers.

Exactly why exposure to the neonics—which act as a neurotoxin to bees and other insects—hindered their ability to bring home the bacon “remains unclear,” the researchers state. But less food means less-healthy hives, making them more vulnerable to the range of other problems plaguing these critical pollinators.

The bees had caught a virus previously thought to affect only plants.

Another recent study adds new weight to the pathogen theory of bee decline. In this one, US and Chinese researchers looked at six healthy and four struggling honeybee colonies and screened them for the presence of various viruses. They found, surprisingly, that bees in the unhealthy colonies tended to be infected at high rates with tobacco-ringspot virus, a pathogen previously known only to infect plants, not animals. The healthy hives were all free of the virus. Tobacco-ringspot virus gets into the hives via pollen, the researchers state; and once there, it “invades and replicates in different body parts” of the bees. Disturbingly, they found that the virus also replicates in varroa mites, an established bee pest, and that the infected mites could help spread the virus.

How did a plant pathogen end up flourishing in bees and their parasites? Tobacco-ringspot virus is a fast-mutating beast, it turns out, and it has evolved the ability to infect insects. (The authors note 5 percent of all known plant viruses move about via pollen, representing the potential for more “host-jumping” pathogens that can affect insects like honeybees.)

At any rate, the six healthy, virus-free hives survived the winter during the study, while the four unhealthy, virus-riddled ones all collapsed before February.

And of course, neonics and other agrichemicals, including fungicides, have been shown to make bees more susceptible to being laid low by other viral pathogens found in the environment. Human beings can’t stop plant viruses from mutating in ways that make them harmful to bees. But we can stop farmers from using chemicals known to hinder bees’ resilience in the face of such threats—as Europe did last year, with its two-year moratorium on neonics, instituted to buy scientists more time to study the issue ahead of a possible permanent ban. That seems as wise as training a wary eye on Col. Mustard when he grips that candlestick at dinner.