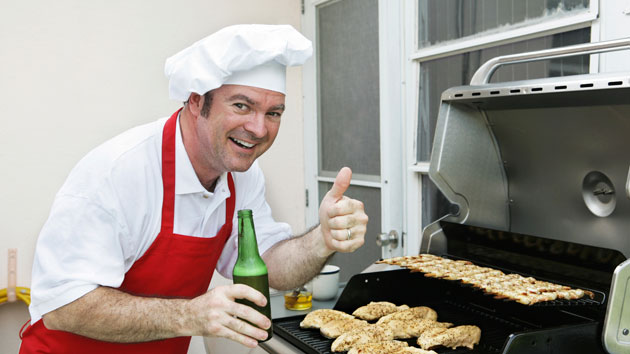 Spring is coming. Before long, beer-drinking men and women will be coaxing fiery embers to life and tossing dead animals onto charred metal grates above them. Ahh, the sizzle and snap of fat as it hits red hot coals. Oh no! What’s that you say? Carcinogens are caused by the “contact of dripping fat with hot embers“?

Fear not, eager human. And keep a couple of your dark winter beers handy, because researchers from Portugal and Spain have found that marinating your pork chops in dark beer dramatically reduces carcinogenic contamination. Rejoice!

Smoke, pyrolysis (organic matter decomposing in intense heat), and dripping fat can all cause the accumulation of polycyclic aromatic hydrocarbons (PAHs) on charcoal-grilled meats. According to the EPA, PAHs have caused tumors, birth defects, and “reproductive problems” in lab animals—though the Agency clarifies that these effects have not yet been observed in humans. You can also find PAHs in cigarette smoke and car exhaust.

The researchers tested the effect of marinating meat with Pilsner, nonalcohol Pilsner, and Black beer, against a control sampling of raw meat. Black beer show the strongest “inhibitory effect,” reducing the formation of carcinogenic PAHs by 53 percent. Pilsner beer and nonalcholic Pilsner, showed less significant results: 13 percent and 25 percent respectively. The scientists aren’t entirely sure why a beer marinade has this effect; they speculate that it might be the antioxidant compounds in beer, especially darker varieties, which inhibit the movement of free radicals necessary for the formation of PAHs.

The study, which will be published in the Journal of Agricultural and Food Chemistry, and sponsored by the University of Porto and the American Chemical Society, confirms what we always knew in our hearts: Guinness is good for you.