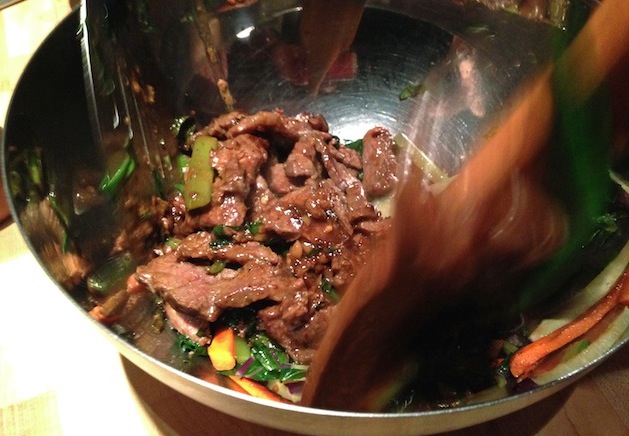 Tossing the beef with the vegetablesPhotos by Tony Macias

This recipe owes its existence to the confluence of three unrelated events:

• At the very end of a busy recent trip to San Francisco, I ate lunch at a restaurant called Mission Chinese, a hipster homage to Americanized Chinese food. I had the “Kung Pao pastrami”—an expertly rendered twist on a venerable strip-mall standard.

• While on the plane home, I read a New York Times style piece on “#normcore,” an internet meme/elaborate joke/contrived fashion trend that involves the “less-ironic (but still pretty ironic) embrace of bland, suburban anti-fashion attire”: stuff like “dad jeans” and Teva sandals.

• The night after I returned from my trip, my mother invited me over for dinner—a simple stir-fried pork dish familiar from my childhood. She brandished a book I hadn’t seen in years: an opulently splattered first edition of Joyce Chen Cookbook, the 1962 opus that taught a generation of Americans (including my mom) how to cook Chinese. Just like in the old days, she served it over white rice—a swerve from her decades-long fixation on brown.

Sitting there, transported by that vintage stir-fry to my ’70s childhood of Toughskins and pre-hipster Chuck Taylors, it hit me: old-school, US-inflected Chinese is a culinary embodiment of #normcore. Plus, it’s really good! (When made with decent ingredients.)

It wasn’t long before I was busy in my own kitchen, contriving my own #normcore stir fry. Since I was having a few friends over, I wanted to find the “less-ironic (but still pretty ironic)” sweet spot—and produce something delicious.

From Joyce Chen‘s recipe for beef with green peppers—a childhood staple—I settled on a protein: “Flank steak is fairly inexpensive and easy to slice,” Chen instructs. And she’s as right in 2014 as she was in 1962. I found a beautiful cut of it at Austin’s excellent neo-old-school, whole-animal butcher shop Salt and Time. I also borrowed from Chen the method for flavoring the stir fry: you marinate the meat in soy sauce sweetened with a little sugar and thickened with corn starch—giving the finished product a lovely glaze—which I goosed up with ginger, green onions, garlic and chili pepper (Chen treats aromatics like ginger and garlic as potent substances to be used in tiny amounts, and her book is devoid of hot peppers.)

For vegetables, green bell peppers felt too on-the-nose #normcore for me. So from that Kung Pao dish I had at Mission Chinese, I lifted the idea of  celery, which strikes me as both a pretty #normcore vegetable itself, and also quite delicious and underused. Carrots, too, seemed right. But I only had a little of each, so I filled out the dish in decidedly un-normcore fashion: with a gorgeous bulb of kohlrabi leftover from the previous week’s farmer’s market run. That kohlrabi bulb sported a generous set of leaves—similar to kale, a related vegetable—so I threw those in, too.

A vegetarian was among the guests, so I had to come up with a non-meat alternative protein. Tofu would have been the straight-ahead #normcore move, but all I had in the fridge was a block of tempeh, so I went with it. Here’s what I came up. Enjoy with canned beer—Bud Light if you want to go full-on you-know-what, or a new-wave canned craft brew like Dale’s Pale Ale if you want a twist.

First make the beef marinade. Cut the spring onions to separate the white and green parts. Slice the green parts into two-inch sections, set aside.  Coarsely chop the white parts, and place them in the bowl of a mortar-and-pestle (a small food processor will also work here). Chop the ginger and garlic and add it to the mortar. Top with the corn starch, sugar, chili flakes, and a good grind of black pepper. Crush everything vigorously together into a paste.  Add the soy sauce and vinegar, and mix it with the pestle. Dump the marinade into a medium-sized bowl. Cut the steak, against the grain, into quarter-inch strips about two inches long. Add the beef to the marinade, along with the green onion tops, and toss to coat well. Set aside.

Now prep the vegetables. Slice the carrots, kohlrabi, and celery into two-inch match sticks. (Here’s a great Jamie Oliver video that explains how to do that better than I ever could in words). Set the carrots and kohlrabi aside in one bowl, and the celery in another. Slice the kohlrabi or kale leaves, if using, into thin strips, and set aside. 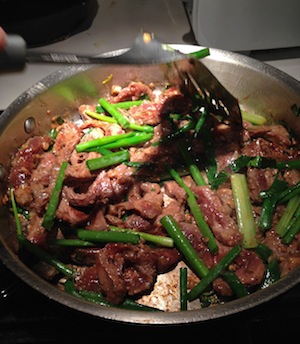 Now the stir fry begins. Set a bowl large enough to incorporate all the ingredients by the stovetop. Put your biggest, heaviest skillet—or wok—over high heat and add enough oil to cover the bottom. When the oil shimmers, add the celery sticks and sauté, using two spatulas to keep them constantly moving. Continue until they’re just cooked—they should retain a little crunch. Place them in the large bowl.

Put a little more oil in the pan—still over high heat—and add the carrot and kohlrabi sticks. Cook them as you did the celery sticks, and then dump them in the same bowl when they’re done. Repeat with the kale leaves, if using.

Again, add a bit of oil to the hot pan. Dump in the meat, onion greens, and the marinade. Spread the meat out across the pan’s bottom, so it forms a single layer. Let it sizzle for a minute—this will allow it to caramelize a bit—and then toss with the two spatulas as with the vegetables, until the meat is cooked through. Add the meat to the big bowl, and toss everything together—the glaze that coats the meat will also coat the veggies. Taste, add a bit more soy, pepper, and vinegar to taste. Serve over brown rice—or white. 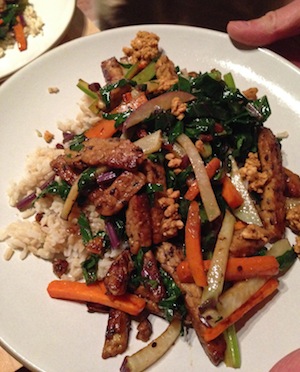 If there’s a vegetarian coming to dinner: Before you start the vegetables for the main dish—in a medium-sized bowl, mix two tablespoons of olive oil, two of soy sauce, and a dash of maple syrup. Take a block of tempeh and cut it lengthwise into quarter-inch strips. Add the tempeh to the bowl and toss. letting it marinate for at least 5 minutes. (This is a twist on the tempeh technique from Heidi Swanson’s great cookbook Super Natural Every Day.) Put a separate skillet over medium heat, add a little peanut or coconut oil. When the oil shimmers, remove the tempeh from its marinade with a slotted spoon and stir fry until it’s cooked through. Place it in a bowl. Then, as each round of veggies come off the main skillet, add a portion to the tempeh. When done, toss together, along with a bit of the marinade.