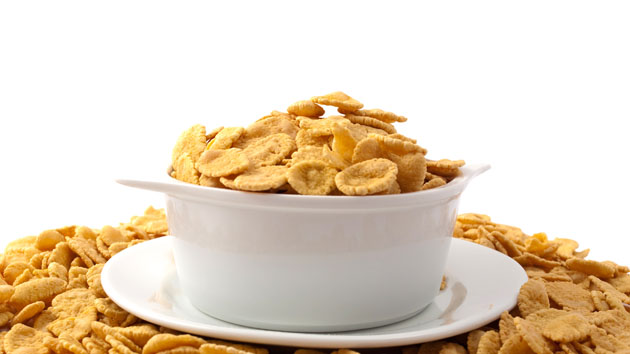 Those bran flakes with “original antioxidants” or “extra vitamin A”? You might be better off without the added nutrients. A report released on Tuesday by the Environmental Working Group (EWG) found that cereals and snack bars that have been fortified with extra vitamins and minerals to appear healthy may actually be harmful—particularly for kids.

The report, How Much is Too Much?, explains that there are some nutrients that most Americans don’t get enough of, like calcium, vitamin D, and vitamin E. But it turns out that kids are eating too much of other nutrients, and overconsuming certain vitamins and minerals for a long period of time can have negative health implications in the long run.

EWG focused on three nutrients that are regularly consumed in excess: vitamin A, zinc, and niacin. Only 6 percent of two- to eight-year-olds are deficient in vitamin A, and less than 1 percent are deficient in zinc and niacin. But, according to the report, an estimated 28 million children between those ages are overexposed to these nutrients from food and supplements.

Studies have shown a host of illnesses associated with excessive intake of these nutrients. Here are the effects of overconsumption, according to the EWG:

Renée Sharp, the EWG’s director of toxics research, explained that the associated health risks are “more chronic than acute”: If a child eats too much of a given nutrient over a long period of time, he or she might experience the associated illnesses down the line. The tricky part is that it’s nearly impossible to link a specific case of an illness to overconsumption of fortified food, so there isn’t a hard and fast set of rules on what to eat and what to avoid. But, according to the report, several studies have shown that “cumulative exposures from fortified food and supplements could put children at risk for potential adverse effects.” Put more simply by Sharp: “if your kid is eating highly fortified cereal, and that kid is also eating snack bars and other fortified foods and you’re giving your kid a vitamin pill, that adds up. And there’s no reason to put your kid at that risk.”

Nutrition labels, even on brands marketed toward kids, almost always show the recommended values for adults.

Part of the reason for childrens’ overconsumption of certain nutrients is marketing: If products are marketed as healthy, people are more likely to buy them. According to New York University nutrition professor Marion Nestle, “Plenty of research demonstrates that nutrients sell food products. Any health or health-like claim on a food product—vitamins added, no trans fats, organic—makes people believe that the product has fewer calories and is a health food…Added vitamins are about marketing, not health.”

Adding to the confusion among shoppers is nutrition labels. Young kids have significantly lower recommended daily intakes of nutrients than adults, but nutrition labels, even on brands marketed toward kids, almost always show the recommended values for adults. Furthermore, the EWG contends that the intake recommendations, which were calculated by the FDA in 1968, are themselves out of date: “Those values were set at a time when people were worried about nutrient deficiencies,” explained Sharp. “Scientists just hadn’t done as much research on the potential pitfalls of overconsuming nutrients. Things have changed.”

Zinc perfectly exemplifies this double whammy. The FDA currently recommends that adults consume 15 milligrams of zinc per day, and that children younger than five consume 8 milligrams per day. But food packaging, which shows recommended intake levels calculated in ’60s, still says that adults should consume 20 milligrams per day. “If you think about it, every single food sitting in the grocery store has a nutrition fact panel right now that is largely irrelevant for young children,” says Valerie Tarasuk, a University of Toronto nutritional scientist.

In the years since the FDA calculated its recommended Daily Values, the Institute of Medicine (IOM), a branch of the National Academy of Sciences, have developed “Tolerable Upper Intake Levels” for these three nutrients (referenced in the graph above). Often, they’re considerably lower than the FDA’s recommended daily allowances. An FDA proposal to revise nutrition labels is currently open for public comment. Though the FDA proposed similar changes in 2003, the Daily Values for nutrients have remained consistent since the 1960s. An FDA spokesperson declined to comment for this article.

In EWG’s review of fortified foods, the top source of excessive intake of the three studied nutrients was cereal. Cereals made up 43 percent of all sources of preformed vitamin A, 52 percent of added niacin, and 97 percent of added zinc.

But not all cereals are fortified equally. The EWG’s analysis of the nutrition labels for 1,556 cereal brands found that 114 cereals were fortified with 30 percent or more of the FDA’s daily intake values (for adults) of vitamin A, zinc, or niacin. The full list of those cereals is here, but here are a few brands you might recognize: