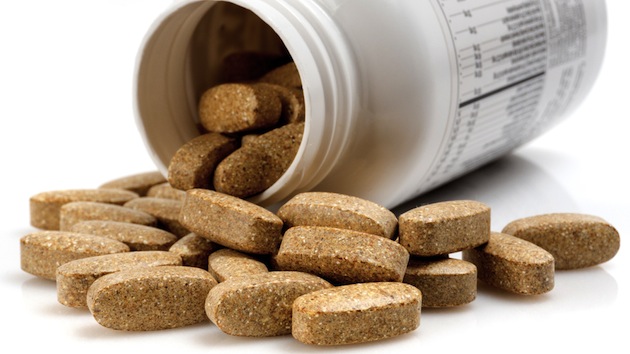 Plants can’t move. They’re sitting targets for every insect, two- and four-legged creature, and air-borne fungus and bacteria that swirls around them. But they’re not defenseless, we’ve learned. Under pressure from millions of years of attacks, they’ve evolved to produce compounds that repel these predators. Known as phyotochemicals, these substances can be quite toxic to humans. You probably wouldn’t enjoy the jolt of urushiol you’d get from a salad of toxicodendron radicans (poison ivy) leaves.

Pills loaded with vitamin E and beta-carotene are at best useless and at worst harmful—that is, they may trigger lung cancer in some people.

But other phytochemicals have emerged as crucial elements of a healthful human diet. Indeed, they’re the source of several essential vitamins, including A, C, and E. But according to an eye-opening Nautilus article by the excellent science journalist Moises Velasquez-Manoff (author of a recent Mother Jones piece on the gut microbiome), our view of how these defensive compounds benefit us might be wildly wrong.

The accepted dietary dogma goes like this: The phytochemicals we ingest from plants act as antioxidants—that is, they protect us from the oxidative molecules, known as “free radicals,” that our own cells produce as a waste product, and that have become associated with a range of degenerative diseases including cancer and heart trouble.

It’s true that many phytochemicals and the vitamins they carry have been proven in lab settings to have antioxidant properties—that is, they prevent oxidization. And so, Velasquez-Manoff shows, the idea gained currency that fruits and vegetables are good for us because their high antioxidant load protects us from free radicals. And from there, it was easy to leap to the conclusion that you could slow aging and stave off disease by isolating certain phytochemicals and ingesting them in pill form—everything from multivitamins to trendy antioxidants like resveratrol. “A supplement industry now worth $23 billion yearly in the U.S. took root,” he notes.

Taking antioxidant supplements before exercise actually negates some of the well-documented benefits of physical exertion.

And yet, antioxidant pills have proven to be a bust. In February, a group of independent US medical researchers assessed 10 years of supplement research and found that pills loaded with vitamin E and beta-carotene (the stuff that gives color to carrots and other orange vegetables) pills are at best useless and at worst harmful—that is, they may trigger lung cancer in some people. Just this month, a meta-analysis published in the New England Journal of Medicine found that antioxidant supplements “do not prevent cancer and may accelerate it.”

And a 2009 study found that taking antioxidant supplements before exercise actually negates most of the well-documented benefits of physical exertion: That is, taking an antioxidant pill before a run is little better than doing neither and just sitting on the couch.

So what gives? Velasquez-Manoff points to emerging science suggesting that phytochemicals’ antioxidant properties may have thrown us off the trail of what really makes them good for us. He offers two key clues. The first is that plants produce them in response to stress—e.g., pathogenic bacteria, hungry insects. The second is that exercise itself is a form of self-imposed stress: You punish your body by exerting it, and it responds by getting stronger.  Leaning on the work of Mark Mattson, Chief of the Laboratory of Neurosciences at the National Institute on Aging, and other researchers, Velasquez-Manoff proposes that phytochemicals help us not by repelling oxidant stresses, but by triggering them.

Consider that exercise actually generates free radicals in our muscles—the very thing, according to current dogma, that makes us vulnerable to cancer and aging. But a while after a bout at the gym or on the running trail, these free radicals disappear, replaced by what Velasquez-Manoff calls “native antioxidants.” That’s because, he writes, “post-exercise, the muscle cells respond to the oxidative stress by boosting production of native antioxidants.” And these home-grown chemicals, “amped up to protect against the oxidant threat of yesterday’s exercise, now also protect against other ambient oxidant dangers” like ones from air pollution and other environmental stressors, he writes. In the exercise study, the supplements may have interrupted the process, the study’s main author, Swiss researcher Michael Ristow, tells Velasquez-Manoff—they prevent the body from producing its antioxidants, but what they deliver doesn’t offset the loss.

Yet phytochemicals found in whole foods—”the hot flavors in spices, the mouth-puckering tannins in wines, or the stink of Brussels sprouts”—may work on our bodies much as exercise does. Velasquez-Manoff writes: “Our bodies recognize them as slightly toxic, and we respond with an ancient detoxification process aimed at breaking them down and flushing them out.”

To bolster his case, Velasquez-Manoff cites the example of sulforaphane, the compound that gives broccoli and other members of the brassica family of vegetables—such as Brussels sprouts—their sulfurous smell when they cook. It’s what’s known as an “antifeedant”—i.e., it’s pungency discourages grazing (and makes many people hate Brussels sprouts, etc). Unlike many phytochemicals, sulforaphane isn’t an antioxidant at all, but rather a mild oxidant—that is, it mimics free radicals and thus under the old dietary dogma, we should avoid it. And yet…

When sulforaphane enters your blood stream, it triggers release in your cells of a protein called Nrf2. This protein, called by some the “master regulator” of aging, then activates over 200 genes. They include genes that produce antioxidants, enzymes to metabolize toxins, proteins to flush out heavy metals, and factors that enhance tumor suppression, among other important health-promoting functions. In theory, after encountering this humble antifeedant in your dinner, your body ends up better prepared for encounters with toxins, pro-oxidants from both outside and within your body, immune insults, and other challenges that might otherwise cause harm.

In this theory, what causes cancer and general aging isn’t oxidative stress itself, but rather a poor response to oxidative stress—”a creeping inability to produce native antioxidants when needed, and a lack of cellular conditioning generally.” And that’s where the modern Western lifestyle, marked by highly processed food and a lack of physical exertion, comes in.

[The National Institute on Aging’s] Mattson calls this the “couch potato” problem. Absent regular hormetic stresses, including exercise and stimulation by plant antifeedants, “cells become complacent,” he says. “Their intrinsic defenses are down-regulated.” Metabolism works less efficiently. Insulin resistance sets in. We become less able to manage pro-oxidant threats. Nothing works as well as it could. And this mounting dysfunction increases the risk for a degenerative disease.

While this emerging view of phytochemcials is compelling, Velasquez-Manoff acknowledges that it isn’t fully settled. For one thing, it’s unclear why isolated phytochemicals in pills don’t seem to work the same magic as they do in the form of whole foods. Here’s Velasquez-Manoff:

Proper dosage may be one problem, and interaction between the isolates used and particular gene variants in test subjects another. Interventions usually test one molecule, but fresh fruits and vegetables present numerous compounds at once. We may benefit most from these simultaneous exposures. The science on the intestinal microbiota promises to further complicate the picture; our native microbes ferment phytonutrients, perhaps supplying some of the benefit of their consumption. All of which highlights the truism that Nature is hard to get in a pill.

But human nutrition is a deeply interesting topic precisely because it resists being settled. As Michael Pollan showed in his 2008 book In Defense of Food, humans have adapted to a wide variety of diets—from the Mediterranean and Mesoamerican ones based mostly on plants, to the Inuit ones focusing heavily on fish. The one diet that hasn’t worked very well is the most calibrated, supplemented, and “fortified” of all: the Western one.