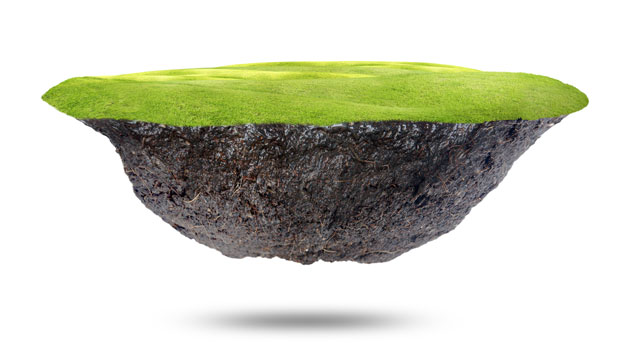 Here’s a odd piece of news: According to a study published Thursday in Science, the water loss due to this year’s drought has caused the entire western side of the United States to literally rise. After examining data from nearly 800 GPS stations across the country, researchers from Scripps Institution of Oceanography found that the area west of New Mexico has risen by an average of four millimeters this year. In the Sierra Nevadas and along California’s coast—two areas that have received far less precipitation this year than normal—the land rose 15 millimeters.

“The earth is an elastic material just like a block of rubber.”

Adrian Borsa, a coauthor of the study, explained what’s happening: “The earth is an elastic material just like a block of rubber. If you put a water load on it, the earth deforms, if you take the water away, the earth will come back.” Using the GPS data, the researchers estimated that the Western United States has lost 62 trillion gallons of water to the atmosphere this year because of the drought. That’s enough water to cover the entire Western US in six inches of water.

The earth rising seems not only vaguely biblical, but also counterintuitive; one might expect the earth’s surface to fall if water is being taken from it. In fact, the ground is falling in some places: Some GPS stations in California had to be left out of the study because farmers are extracting so much groundwater that the ground is literally caving in. But this study didn’t examine the ground at a surface-level—it showed that the earth’s crust and mantle are responding elastically to the drought. So while some areas may be falling because of man-made changes at a local level, the West as a whole is rising.

As it turns out, the rise and fall of the earth due to water loss actually happens a little each year with the change of the seasons: Land is heavier in the winter and spring, and when water evaporates in the summer and fall, land is a little lighter. But the annual variation in California’s mountains is about 5 millimeters—not this year’s 15. The difference “sounds tiny,” said Borsa, but from a geological standpoint, “it’s a whopping signal” of the amount of water lost to the drought.

Contrary to most drought news these days, this rise of the West doesn’t have looming disastrous effects in and of itself: The researchers, for example, don’t think that this change will cause more extreme earthquakes.

But Borsa says that using GPS data on the rise of the earth could help regulators to understand how much water is being used in the West—particularly in California. California is the only Western state that doesn’t measure or regulate major groundwater use; if you can drill down to it, it’s all yours. A report produced for the state’s Department of Food and Agriculture estimated that California’s farmers will pump about 13 million acre-feet of groundwater this year—enough water to put a piece of land the size of Rhode Island 17 feet underwater.

With no regulatory system in place, though, it’s challenging for officials to know if these estimates are lining up with reality. “The extractions aren’t monitored, so no one really knows how to monitor the water supply,” says Borsa. Using GPS data “could be a great tool for water managers.”