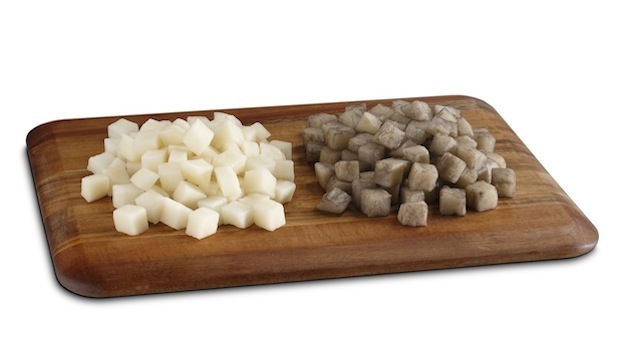 Which spud's for you? The Innate, left, is engineered not to turn brown soon after cutting. Photo provided by J.R. Simplot

Would you be excited to pluck a bag of precut, gleaming-white potato slices from supermarket produce bin—fresh not frozen, and ready to throw in the pan or the FryDaddy?

Your answer may decide the fate of the “Innate” potato, which has been genetically engineered to resist browning and to contain less of the amino acid that turns into acrylamide—a probably human carcinogen—when potatoes are fried at high temperatures. Developed by the agribusiness giant J.R. Simplot, a major player in the $3.7 billion American potato market, the product won approval last week from the US Department of Agriculture (USDA). The reason you can currently only buy frozen precut potatoes is that they turn brown quickly. The Innate solves this, uh, problem.

To understand why the success of the new potato will hinge on your desire for convenience, a little background is in order: Simplot is one of the three massive companies (alongside ConAgra and McCain Foods) that buy potatoes from farmers, process them into French fries—as well as tater tots, spiral fries, and wedges—freeze them, and distribute them to companies ranging from fast-food giants to supermarket chains.

According to the USDA, more than one-third of the potato harvest goes through this processing stream. About 60 percent of the harvest is sold fresh and whole via either supermarkets or restaurants and other food-service establishments.

If the Innate is going to take off, Simplot will have to win over three major factions: The first is farmers, who will pay a premium for those genetically engineered traits. According to Simplot spokesperson Doug Cole, they’ll be able to “recoup” it the higher price because the GE potatoes will bruise less easily and farmers will have have fewer unsellable potatoes on their hands. The second group is big buyers such as McDonald’s. The third is you and me—consumers.

“McDonald’s USA does not source GMO potatoes, nor do we have current plans to change our sourcing practice.”

But that’s just year one. Maybe they’ll catch on soon after? The Idaho Potato Commission, which represents growers in what is by far the most prolific spud state, declined to comment on whether its farmers would embrace the new variety. But commission president Frank Muir expressed caution last year. “Unless your customers are prepared to embrace this product,” he told the Associated Press, “It’s not going to be successful.”

McDonald’s, which reportedly buys 3.4 billion pounds of potatoes annually in the United States, probably won’t be the driving force for customer acceptance. “McDonald’s USA does not source GMO potatoes, nor do we have current plans to change our sourcing practice,” a company spokesperson told me.

When you think about it, that cautious attitude makes perfect sense. McDonald’s has been beset by declining sales and questions about the quality of its food. Its customers don’t care about the Innate’s anti-browning quality because they buy their fries cooked. The only potential sales pitch would involve the lower dose of acrylamides. But saying “Our new fries might be less carcinogenic than the ones we’ve been selling you for 50 years” doesn’t have much of a ring to it.

The Innate needn’t be labeled as a GMO, but it will have to be marketed as improved, given the higher price point.

And that brings us to consumers roaming the produce aisle and happening upon that bag of lily-white, precut spuds. Simplot’s Cole told me that the company plans to keep the Innate out of the french-fry supply chain for the next two years to have time to “secure foreign market approvals for the industry’s largest export markets.”

In the meantime, the strategy is to directly target the US consumer. Coles says the company will be introducing its product in test markets “this spring or summer.” And since the FDA doesn’t require the labeling of GMO foods, consumers may not know they’re engineered. But the potatoes still have to be marketed as improved, or they won’t command a premium price. Cole offered this pitch: “Since Innate potatoes provide less bruise and less black spot and browning when peeled, as well as less asparagine, they provide a sustainable, healthy option for consumers, especially in the fresh-whole and fresh-cut markets where no preservatives or additives are needed,” he said. He emphasized that “fresh-cut” potatoes are a new category, and expressed confidence that consumers would embrace the convenience.

If they don’t, though, it’s hard to see how the Innate will gain traction.

For Simplot, the stakes seem high. The company spent 14 years developing the Innate, Cole says, although he wouldn’t say how much it spent doing so. But according to a study by Croplife International, the GMO industry lobbying group, it takes on average $136 million to develop a single crop trait through biotechnology—and the Innate contains two.

It should be noted that Simplot has won big bets on new markets before. As Eric Schlosser showed in his masterful 2001 book Fast Food Nation (excerpt here), the company innovated the practice of selling precut frozen potatoes to fast-food chains back in the 1950s.