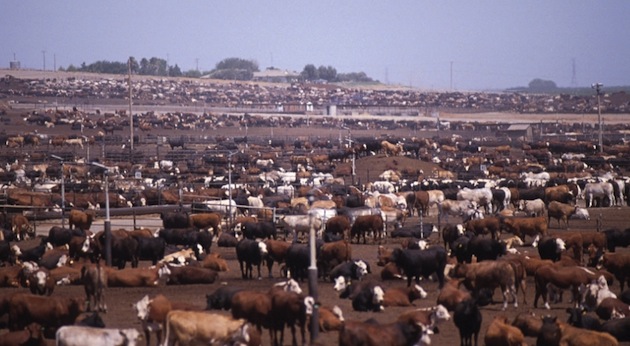 Does what's deposited onto the feedlot floor stay in the feedlot? The answer, my friend, is blowin' in the wind. <a href="https://www.flickr.com/photos/sraproject/3239348976/sizes/o/in/photostream/">Socially Responsible Agriculture Project</a>/Flickr

Ever approached a feedlot teeming with thousands of cattle? Unlike industrialized hog and chicken farms, where huge enclosed buildings trap at least some of the smell, cattle feedlots are open-air—as anyone who has driven Highway 5 between Los Angeles and San Francisco can testify. Turns out, when you inhale the aroma, you’re not just getting a blast of ammonia and other noxious fumes. You’re also probably breathing in tiny particles of antibiotics, bacteria from cows’ “fecal matter and gut flora,” and antibiotic-resistant gene sequences. That’s the conclusion of a new study from Texas Tech researchers, who analyzed air samples taken just downwind of ten cattle feedlots in Texas and states to the north, each containing between 20,000 and 50,000 cows.

The team placed portable air samplers 10-20 yards upwind and downwind of feedlots in the fall and winter months, when temperatures are mild and wind is moderate, and analyzed the particulate matter. Monenisin, an antibiotic growth promoter widely used on beef and dairy feedlots, turned up in 100 percent of samples, at much higher rates downwind (mean: 1,800 parts per billion) than upwind (below the level of measurement.) Now, monenisin isn’t used in human medicine, meaning that it doesn’t directly contribute to antibiotic resistance that affects us. But tetracycline antibiotics—used commonly to treat urinary tract infections and pink eye—showed up in 60 percent of the downwind samples and 30 percent of the upwind samples, again at much lower levels upwind.

Levels of antibiotics in the air outside of feedlots were similar to those typically found within large enclosed hog operations.

To put these findings in perspective, the authors note they found antibiotics in the air outside of these feedlots at levels similar to those typically found within large enclosed hog operations—meaning that finding yourself 20 yards from a giant cattle lot is a lot like being inside a hog house.

They also found bacteria “common to fecal matter and gut flora” at significantly higher levels downwind than upwind, including several that can cause human infections, including including corynebacterium, Leptospira, Clostridia, Bacteroides, and Staphylococcus.

And they picked up gene sequences that confer resistance to tetracycline at rates ranging from 100 to more than 1,000 times higher downwind than upwind. And get this: Those tetracycline-resistant genes appeared at much higher rates than those typically found in the liquid manure lagoons that build up in beef feedlots—meaning that wind may be even more prolific than water at spreading antibiotic-resistant genes from the farm to the surrounding region.

So how is all this nasty stuff moving from the feedlot to the surrounding air? The authors offer a simple explanation: The ground in feedlots “consists primarily of urine and fecal material,” the study notes. In the morning, all of that … stuff is relatively stable, held more or less in place by moisture from humidity. But after hours of sunlight, the floor material “becomes dry and brittle, thus becoming source material for fugitive dust.”

So what does this all add up to? The study doesn’t comment on whether the particles the researchers found are at high enough levels to directly cause human harm. But that’s not the main concern—most of us don’t spend much time near massive concentrated cattle operations. (Feedlot workers are another story.) The larger issue is those antibiotic genes, traces of antibiotics, and fecal microbes that are being scattered far and wide. The authors note that of the nation’s 2,100 large-scale (1000 head or greater) cattle feedlots, more than three-quarters are in the region of area study, the southern Great Plains (a swath stretching from northern Texas through parts of Oklahoma, Kansas, Nebraska, and Colorado)—the very region with the “highest frequency of dust storms in the United States.” The region’s semi-arid conditions—as well its its propensity for prolonged droughts—provides an ideal environment for the “wind scouring of dry soils,” and “aerial transport and deposition” of feedlot particles into “surrounding soil surfaces, water surfaces, vegetation, and other living organisms.”

And that’s under calm weather conditions. “Fronts and other major weather patterns frequently sweep through this region, and are often associated with exceedingly high wind velocities which themselves transport significant masses of particulates into the atmosphere and across the region and continent,” they add. And once in the environment, resistance genes can jump from bacteria that don’t pose a threat to humans to ones that do, the authors note.

The study is yet another reminder that the massive amounts of waste generated on factory farms don’t stay on factory farms. (Here’s a 2011 paper from North Carolina State and Kansas State researchers showing that cockroaches and flies carry antibiotic-resistant bacteria from large hog facilities; and a 2014 one from Johns Hopkins and University of North Carolina researchers finding that resistant bacteria leave the farm in the noses of workers.)