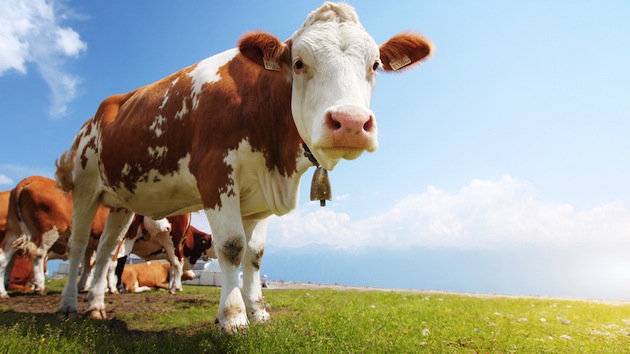 Do I look like a catfish to you? <a href="http://www.shutterstock.com/pic-147941570/stock-photo-cows-grazing-on-a-green-meadow-at-sunny-day.html?src=dt_last_search-8">Dudarev Mikhail</a>/Shutterstock

The ace New York Times food/agriculture reporter Michael Moss has an excellent long piece on the US Meat Animal Research Center, a US Department of Agriculture-run institution that, Moss writes, has “one overarching mission: helping producers of beef, pork and lamb turn a higher profit.” As a result of its laser focus on that task, Moss shows, the center has routinely subjected animals to cruel conditions since its inception in 1964, unchecked by the Animal Welfare Act, which exempts farm animals used in research. The article is littered with images of calves born mangled, newborn lambs abandoned to die in the cold overnight, and piglets crushed by their mothers—all the routine result of federally funded experiments.

What strikes me is the cold, industrial vision of livestock farming embodied by the research center: animals as inert commodities to be manufactured as cheaply as possible, like microchips or screws. Physiology becomes a production process to be hacked for the convenience of producers. Cows only give birth to one calf at a time? Inefficient and unacceptable! Moss draws out the grotesque tale of a project designed to change that, spearheaded by the center’s founding director, Keith E. Gregory. Back in 1981, Moss reports, Gregory published a paper comparing the cow’s modest reproductive powers with those of the prolific catfish, which churns out “more than 1,000 times its weight in offspring.”

Thus launched a long effort to make cows more catfishlike: Engineer them (using conventional breeding techniques) to birth twins, not one-offs. And it succeeded—sort of. By 2000, Moss reports, cows in the experiment were birthing twins 55 percent of the time vs. the normal rate of 3 percent. But…

Some 95 percent of the females born with male siblings had deformed vaginas. Many of the twins died during birth as their eight legs became tangled. Even calves born singly had trouble getting out: The mothers had been bred with such large wombs, to accommodate twins, that the calf could not get enough traction. And the breeding increasingly yielded triplets, with 12 legs to get tangled.

As a result, he writes, “16.5 percent of twins and triplets were dying, a rate more than four times that of single calves.”

Still, the center thought it had handed the beef industry a great gift—at a beef conference, center officials “acknowledged the high death rates, yet argued that the math still worked in ranchers’ favor,” because, “the combined weight of surviving twin cows was nearly 50 percent more, on average, than for conventional cows.”

Instead of trying to turn cows into catfishesque baby-making machines, USDA could figure out best practices for diversified livestock ag.

Ironically, the idea of cows tweaked to birth twin calves creeped out Big Beef, an industry not normally known for turning squeamish in pursuit of profit. The idea never caught on among cattle ranchers, and the program petered out in 2013. “The surviving cows were sold, though the center is still trying with little success to sell the bulls’ semen,” Moss writes. Your tax dollars at work! The piece teases out similarly vexed efforts to jack up pigs’ birth output. One initiative that did succeed, according to Moss, was a program to breed pigs to be much leaner—creating flavor-challenged pork and sows that are “so low in fat that one in five females cannot reproduce,” Moss writes.

Now, a lot of people will read Moss’ exposé and conclude that the US Meat Animal Research Center must be defunded and closed. But publicly financed ag research is vital to maintaining a resilient, plentiful food supply in era of climate chaos and ecological crisis in farm country. Federal ag research funding has been flat in recent years, and a rising tide of agribusiness cash has played an increasingly dominant role in setting the research agenda, especially in the meat field.

But there’s no reason that federal livestock research should exist purely to boost the profits of the big meat packers, which rely on highly specialized farms called concentrated animal feeding operations (CAFOs) that stuff thousands animals tightly together. It has been well established that diversified farms, ones that produce meat as well as crops, are more ecologically sound (PDF) than specialized ones.

But now that diversified farms have largely been driven out of business over the past several decades, few farmers (or the bankers they rely on for financing) are willing to take the risk of, say, periodically rotating beef cows into fields now dominated by corn and soybeans, even though such a system would likely sequester carbon and rebuild depleted soil. And that’s where the US Meat Animal Research Center could come in. Instead of spending years and untold resources trying to turn cows into catfishesque baby-making machines, they could do on-the-ground research to figure out best practices for diversified livestock ag. Don’t slaughter federal livestock research; nurture it so that it grows into something that benefits the public—while also respecting animal welfare.