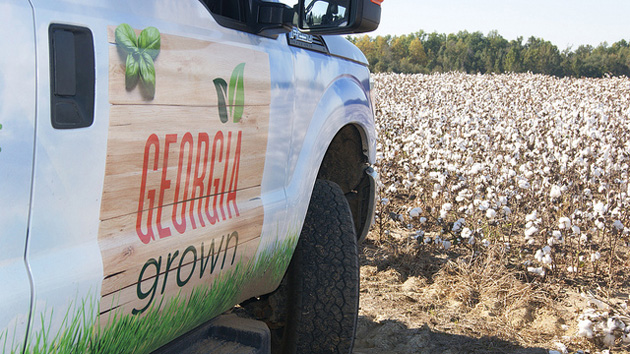 A cotton field in Georgia. <a href="https://www.flickr.com/photos/georgiadepartmentofagriculture/8116216862/in/photostream/">Georgia Department of Agriculture</a>/Flickr

California is by far the dominant US produce-growing state—source of (large PDF) 81 percent of US-grown carrots, 95 percent of broccoli, 86 percent of cauliflower, 74 percent of raspberries, 91 percent of strawberries, etc.

But all three of its main veggie growing regions—the Imperial Valley, the Central Valley, and the Salinas Valley—face serious short- and long-term water challenges. As I recently argued in a New York Times debate, it’s time to “de-Californify” the nation’s supply of fruits and vegetable supply, to make it more diversified, resilient, and ready for a changing climate.

Here are maps of US fruit and vegetable production: 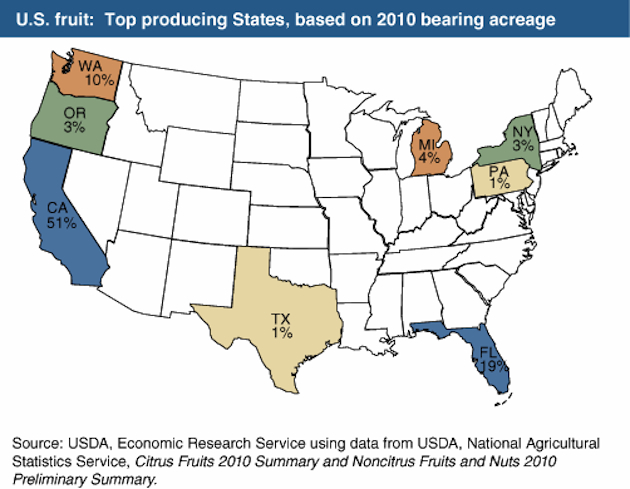 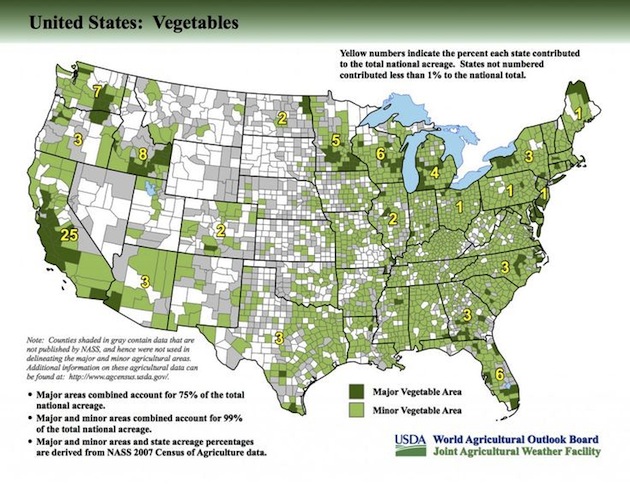 Now check out this map depicting average annual precipitation. The data are old—1961 to 1990—and weather patterns have changed since then as the climate has warmed over the decades. But the overall trends depicted still hold sway: The West tends to be arid, the East tends to get plenty of rain and snow, and the Midwest lands, well, somewhere in the middle. So the map remains a good proxy for understanding where water tends to fall and where it doesn’t, though the precipitation levels depicted for California look downright Londonesque compared to the state’s current parched condition. 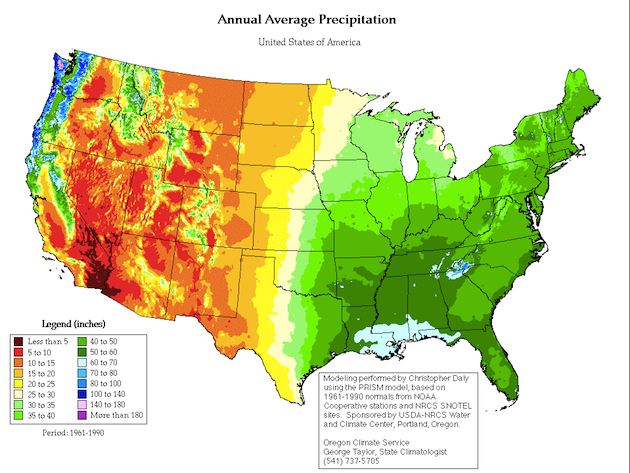 Not only is California gripped in its worst drought in at least 1,200 years, but climate models and the fossil record suggest that its 21st-century precipitation levels could be significantly lower than the 20th-century norm, when California emerged as a fruit-and-vegetable behemoth.

So here’s an idea that could take pressure off California. In my Times piece, I looked to the Corn Belt states of the Midwest as a prime candidate for a veggie revival: Just about a quarter million acres (a veritable rounding error in that region’s base of farmland) from corn and soy to veggies could have a huge impact on regional supply, a 2010 Iowa State University study found.

Now my gaze is heading south and east, to acres now occupied by cotton—a crop burdened by a brutal past in the South (slavery, sharecropping) and a troubled present (a plague of herbicide-tolerant weeds): 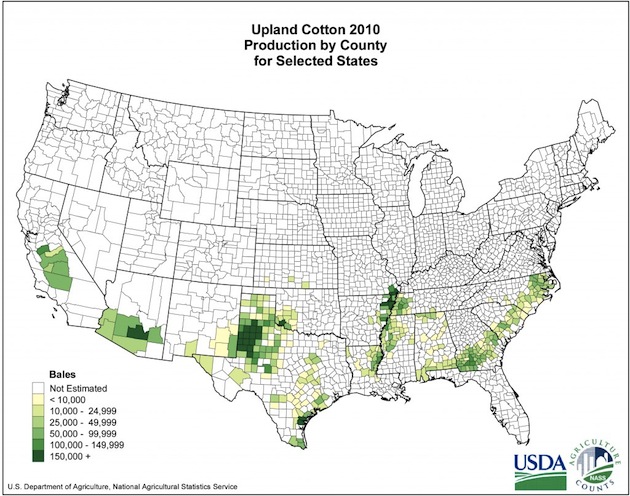 Let’s leave aside all of the cotton growing on the arid side of the map. (The drought is already squeezing out production of the fluffy fiber in California; as for the Texas panhandle, cotton production there relies heavily on water from the fast-depleting Ogallala Aquifer—not a great long-term strategy.)

Small-scale fruit and vegetable farms are “already gearing up down there,” said one expert.

What I’m eyeing are those cotton acres on the water-rich right side of the map—the Mississippi Delta states Arkansas, Mississippi, Missouri, Tennessee, and Louisiana, along with the Carolinas, Alabama, and Georgia to the east. According to the USDA, mid-Southern and Southeastern states planted more than 4 million acres of cotton in 2014. This is what’s left of the old—and let’s face it, infamous—Cotton Belt that stocked the globe’s textile factories during the 19th-century boom that delivered the Industrial Revolution (a story told in Sven Beckert’s fantastic 2014 book Empire of Cotton).

Decades of low prices have already put a squeeze on Southern cotton acres, and the fiber has recently slumped anew in global trading. Why not transition at least some acres into crops with a robust domestic market? I bounced my idea of a Cotton Belt fruit-and-vegetable renaissance off a few experts to see if it was nuts. Ferd Hoefner, policy director of the National Sustainable Agriculture Coalition, called it “noncrazy.” He pointed out that, as in most other parts of the United States, small-scale farms that sell directly to consumers are “already gearing up down there,” and added that the region “seems ripe for entrepreneurial companies to come in, buy land, grow farmers, introduce a whole new vegetable supply chain on a bigger scale, especially with California’s woes.”

I’m not talking about a fantasy in which everyone eats from within 20 miles (although such locavore networks, which have thrived nationwide over the last two decades, certainly add diversification and resilience to the overall food system). I’m simply pushing a more regionalized, widely distributed scheme for filling our salad and fruit bowls, one less dependent on California and its overtaxed water resources.

Scott Marlow, executive director of North Carolina-based RAFI USA, a farmer advocacy organization, also said the idea make sense—with caveats. One is credit. Marlow says that most farmers who still plant cotton are large enough that they rely on loans to start the growing season—and bankers understand and are used to cotton, but may find vegetables too exotic and risky. For such farmers, “if the banker won’t lend for it, [they] are not doing it,” he said. Reforms in the latest farm bill made it easier for “specialty crop” (i.e., fruit and vegetable) farmers to get good crop insurance, and that, in turn, made it easier to get loans, he said. But those changes take time to sink in.

He added that the South’s high levels of precipitation can actually be a liability compared to California’s aridity, because “rain spreads diseases through splash erosion, ruins product, screws up harvest, reduces product quality.” California farmers, who meet their watering needs through controlled irrigation, don’t have those problems.

But rain troubles can be addressed through low-tech means like high tunnels, which are already being adapted by Southern produce farmers to extend the growing season, but also to protect sensitive crops from rain, Marlow said. Black plastic mulch, another widely adapted practice, also helps keep crops healthy in rainy periods, he added. The South’s farmers have demonstrated the ability to innovate, he said, but “there have to be markets, there has to be risk management, and there has to be access to credit.”

Converting swaths of Dixie country to vegetables won’t be a fast or easy process. But if California’s water troubles drag on, as it appears they will, broccoli may yet emerge as the heir apparent to doddering King Cotton.