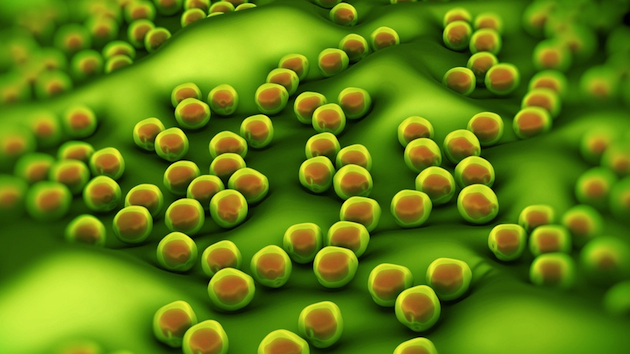 A close-up of the methicillin-resistant Staphylococcus aureus (MRSA) bacteria, which is commonly found on supermarket pork. <a href="http://www.shutterstock.com/pic-224470435/stock-photo-superbug-or-staphylococcus-aureus-mrsa-bacteria.html?src=dt_last_search-1">www.royaltystockphoto.com</a>/Shutterstock

Back in April 2012, the Food and Drug Administration launched an effort to address a problem that had been festering for decades: the meat industry’s habit of feeding livestock daily low does of antibiotics, which keeps animals alive under stressful conditions and may help them grow faster, but also generates bacterial pathogens that can shake off antibiotics, and make people sick.

The FDA approached the task gingerly: It asked the industry to voluntarily wean itself from routine use of “medically important” antibiotics—those that are critical to human medicine, like tetracycline. In addition to the light touch, the agency plan included a massive loophole: that while livestock producers should no longer use antibiotics as a growth promoter, they’re welcome to use them to “prevent” disease—which often means using them in the same way (routinely), and at the same rate. How’s the FDA’s effort to ramp down antibiotic use on farms working? Last week, the FDA delivered an early look, releasing data for 2013, the year after it rolled out its plan. The results are … scary. 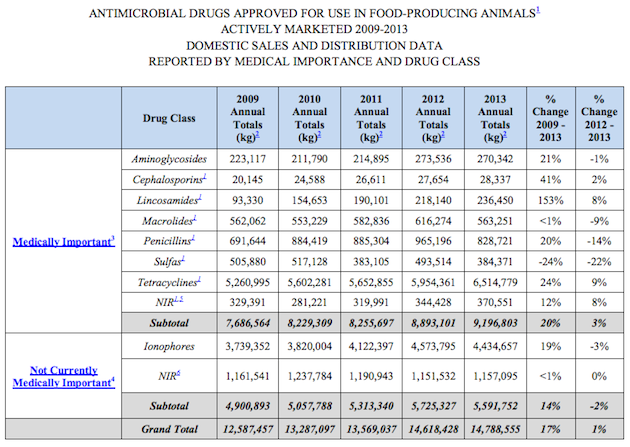 The report also delivers a stark view into just how routine antibiotics have become on farms. 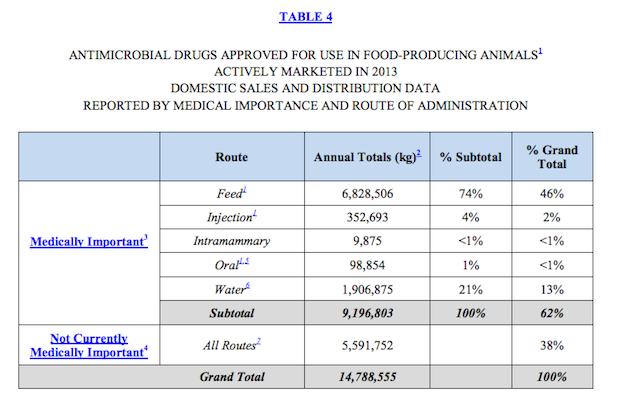 Note that 74 percent of the medically important drugs being consumed on farms are delivered through feed, and another 24 percent go out in water. That means fully 95 percent is being fed to animals on a regular basis, not being given to specific animals to treat a particular infection. Just 5 percent (4 percent via injection, 1 percent orally) are administered that way.

Anyone wondering which species—chickens, pigs, turkeys, or cows—get the most antibiotics will have to take it up with the FDA. The agency doesn’t require companies to deliver that information, so it doesn’t exist, at least not in publicly available form. The FDA only began releasing any information at all on livestock antibiotic use in very recent years, after having its hand forced by a 2008 act of Congress.

Meanwhile, at least 2 million Americans get sick from antibiotic-resistant bacteria each year, and at least 23,000 of them die, the Centers for Disease Control estimates. And while all of that carnage can’t be blamed on the meat industry’s drug habit, it does play a major role, as the CDC makes clear in this handy infographic. 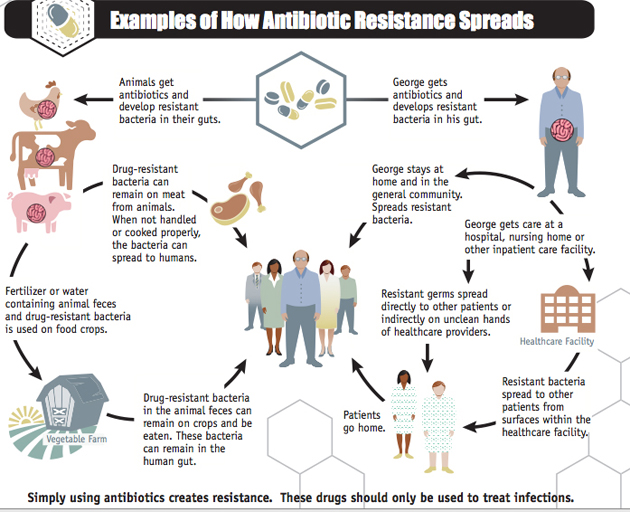