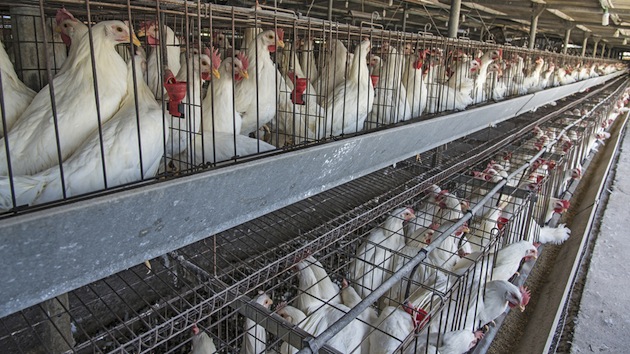 The Midwest’s ongoing avian flu crisis is wreaking havoc on the region’s large-scale egg and turkey farms. Last week alone, the US Department of Agriculture confirmed that the virus had turned up in more than 20 additional facilities in the region, condemning 4 million birds to euthanasia. Altogether, the H5N2 virus—”highly pathogenic” to birds, so far non-threatening to humans—has affected 168 sites and a jaw-dropping 36 million birds, the great bulk of them in Iowa and surrounding states. It’s the largest avian flu outbreak in US history—and it has already wiped out 40 percent of the egg-laying flock h Iowa, the number-one egg-producing state in the US, according to The New York Times.

You’d expect backyard flocks to be widely affected too, but they don’t seem to be,” said one virologist.

According to Hon S. Ip, a virologist at the US Geological Survey’s National Wildlife Health Center, it’s a genuine mystery. Backyard flocks typically roam outdoors, in ready contact with wild birds, which are thought to be the origin of the virus. Their commercial counterparts live in tight confinement under strict “biosecurity” protocols: birds are shielded from contact with the outdoors; workers change into special boots and coveralls—or even shower—before entering facilities, etc.

Ip said that wild birds could be spreading the virus in one of two ways: directly, by bringing chickens and turkeys into contact with infected feces; or indirectly, through wind-borne particles that, say, blow through vents in a confined facility. “If that’s how it’s spreading, you’d expect backyard flocks to be widely affected too, but they don’t seem to be,” he told me. Moreover, it has continued to spread in Iowa, even after the egg industry had ample time to ramp up biosecurity. All of this suggests something else, besides wild birds, might be the cause, Ip added.

USDA secretary Tom Vilsack speculated that the virus could be entering farms through biosecurity breaches.

But what? He has no idea, he said. And nor, apparently, does anyone else. In a recent news item [paywalled], the journal Science declared the outbreak “enigmatic.” “All the old dogma about high-path influenza transmission has just gone out the window,” Michael Osterholm, director of the Center for Infectious Disease Research and Policy here at the University of Minnesota, told the journal. “We’re in totally uncharted territory.”

Meanwhile, in an interview with Iowa Public Radio, USDA secretary Tom Vilsack speculated that the virus could be entering farms through biosecurity breaches. “We’ve had circumstances recently where folks have been using pond water, for example, to feed and to water their birds. Well, that’s a problem because the pond water could be contaminated,” Vilsack said in the interview. “We’ve had situations where folks are supposed to shower before they go into the facility, but the shower doesn’t work, so they go in anyway.”

I’ve seen no reports detailing current conditions on egg farms in Iowa, but it’s worth noting that in 2010, the Food and Drug Administration found troubling biosecurity lapses within some of the state’s largest egg facilities, after they had been forced to recall 550 million eggs due to potential salmonella contamination. The FDA inspectors’ report detailed a variety of problems, including several involving contact between egg-laying hens and wild birds.

While experts scramble to figure out how the disease is spreading, the egg and turkey industries are dealing with one particular immediate consequence: how to safely dispose of millions of potentially flu-ridden bird carcasses. As the Des Moines Register reports, the process is not going smoothly:

Landfills in South Dakota, Nebraska and northwest Iowa, where poultry producers have been the hardest hit, have turned away the dead birds, fearful of the risk of contamination. The problem is so severe that on Friday, U.S. Secretary of Agriculture Tom Vilsack stepped in to urge landfills to accept some of the millions of birds killed or destroyed by the H5N2 virus, saying delays could [exacerbate] odors and flies, problems neighbors have already complained about in some parts of the state.

In response to these difficulties, the USDA has “dedicated 266 employees, including 85 in Iowa, and contracted more than 1,000 personnel to work around the clock across the 20 states affected by the outbreak,” Vilsack wrote in a statement. In addition, the agency has allotted $130 million “in indemnity payments to help poultry producers who have lost flocks get back on their feet,” Vilsack added.

That relatively modest measure of taxpayer support for the poultry industry may just be the beginning. The USGS’s Ip said the rate of new infections is “showing signs of slowing down” as warm weather sets in. Flu viruses are “less stable” at higher temperatures, he said, which is why flu tends to be much worse in winter than in summer. But as Reuters reported recently, the USDA warns that it’s “highly probable” the strain will return when the weather cools this fall. If it does, and it spreads to the eastern and southern poultry belts—where the great bulk of the chicken we eat is produced—taxpayers could be in for a real hit.