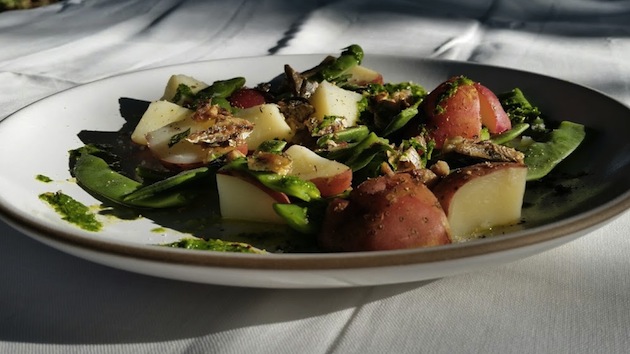 My vegetable repertoire has narrowed to the point of tedium: I sauté fast-cooking ones like greens and fresh beans and roast slow-cooking ones like potatoes unto caramelization. Most everything gets plenty of garlic, high-flavor fats like olive oil or lard, and a dash of chile pepper.

But on a recent trip to Austin’s urban-ag jewel Boggy Creek Farms, I picked up first-of-the-season green beans and red new potatoes that were so fresh and enticing that such treatments seemed way too aggressive. I wanted the flavor of the vegetables themselves, not my cooking techniques and condiments, to dominate.

So I did something I don’t think I’ve ever done voluntarily: I steamed them. And I’ll be damned if they didn’t avoid blandness, the fate I’ve always associated with the technique. Instead, the potatoes were like an impossibly potato-y bite of the earth itself; and the green beans delivered a crunchy jolt of chlorophyllic sweetness.

To bring it all together into a light meal, I needed a low-key dressing. My Boggy Creek expedition also netted a bunch of flat-leaf parsley, which I decided to whiz into a vinaigrette. I also wanted a protein element, and in my cupboard I found one that would provide a sharp contrast to the delicate vegetables: a tin of sardines.

To preserve the original idea—vegetables that tasted of themselves—I decided to compose the plate precisely. Here’s what I did:

(Light meal for two, plus some leftovers)

Add a steamer insert to a pot along with an inch of water. Cover and turn heat to high until the water boils. Turn the heat down halfway, add the potatoes, cover, and steam until they’re just tender. Remove to a bowl. Add a bit more water to the pot, and repeat with the green beans, making sure they’re left with a little crunch.

Meanwhile, make the vinaigrette by combining the parsley, oil, vinegar, and a pinch of salt and pepper in a food processor or blender. Mix until reasonably smooth. (You will likely have leftover dressing—keeps well in the fridge for a few days, and makes everything taste good.)

To compose, start by dotting each plate with splotches of dressing. Now carefully layer on the vegetables, distributing them more or less evenly (leaving aside about a third for seconds or leftovers.) Then add the sardines the same way—use them all, because they don’t make for fun leftovers. Finally, add a few more dots of dressing, as well as a conservative dusting of sea salt and freshly ground black pepper. Place a bowl of extra dressing at the table for supplementation.

This dish is made to serve with a minerally, ice cold white wine.