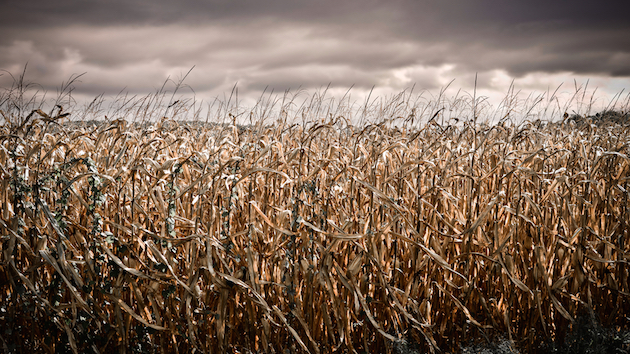 I’ve been thinking a lot recently about how fertilizer from the Midwest’s big corn farms seeps into streams and causes trouble—fouling water supplies in Columbus, Toledo, Des Moines, and 60 other towns in Iowa, and generating a Connecticut-sized dead zone at the heart of the continental United States’ most productive fishery, the Gulf of Mexico. (Farms in the region also plant soybeans, but corn is by far the bigger fertilizer user.) But there’s another way the Corn Belt’s fertilizer habit damages a common resource: by releasing nitrous oxide (N2O), a greenhouse gas with nearly 300 times the heat-trapping power of carbon dioxide.

Scientists had been undercounting nitrous oxide emission in the Corn Belt by about 25 gigagrams annually—the equivalent of about 1.6 million cars on the road.

It turns out that the region’s farms are likely generating much more nitrous oxide than scientists previously thought, according to a new peer-reviewed study by a team of researchers from the University of Minnesota, Yale, and the US Department of Agriculture.

To measure how much, the team, led by University of Minnesota researcher Pete Turner measured N2O emissions at 19 streams over a two-year period in ag-intensive southeastern Minnesota. They found that standard greenhouse gas emission measures, such as those used by the Intergovernmental Panel on Climate Change (IPCC), have been undercounting these “riverine” emission sources by a factor of nine; and overall N2O emissions from the area are underestimated by about 40 percent.

While they only took measurements in one small part of the US Midwest, the researchers write that other regions of the globe have similar conditions: large swaths of land dominated by fertilizer-intensive farming. Such areas include the rest of the US Corn Belt plus parts of China, Europe, and India. These industrial-scale farming regions, which together make up a landmass of about 580 million acres (nearly six times the size of California), are the globe’s most potent sources of nitrous oxide, and we’re likely drastically undercounting their total emissions, the study suggests.

Altogether, the paper estimates, typical assessments undercount nitrous oxide emission in the Corn Belt by about 25 gigagrams annually. According to my back-of-the-envelope calculation, that’s the equivalent of about 1.6 million cars on the road over a year (assuming that 1 gram of nitrous oxide has the heat-trapping power of about 300 grams of carbon dioxide, and that the average passenger car burns through 4.75 metric tons of CO2 equivalent each year).

So efforts to rein in fertilizer runoff in the Corn Belt aren’t just about cleaner water and lower filtration bills for the area’s urban residents, or a more vibrant Gulf of Mexico fishery. They’re also about stabilizing the climate. Back in 2013, I profiled Ohio farmer David Brandt, who has innovated a method for churning out bumper harvests using much less fertilizer, leading to much less runoff.