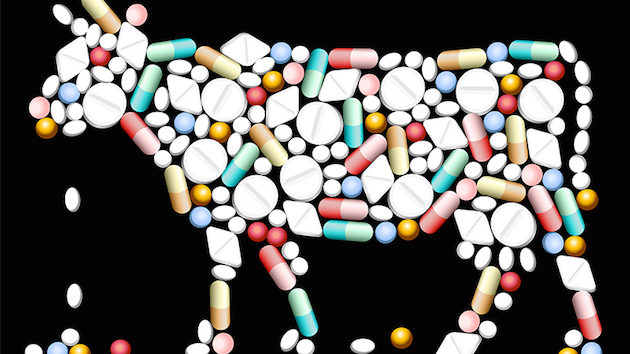 The meat industry’s massive appetite for antibiotics just keeps growing. That’s the takeaway from the Food and Drug Administration’s latest annual assessment of the issue, which found that agricultural use of “medically important” antibiotics—the ones that are prescribed to people when they fall ill—grew a startling 23 percent between 2009 and 2014. Over the same period, the total number of cows and pigs raised on US farms actually fell a bit, and the number of chickens held steady. What that’s telling us is that US meat production got dramatically more antibiotic-dependent over that period.

Even more disheartening, medically important antibiotic use crept up 3 percent in 2014 compared with the previous year—despite the FDA’s effort to convince the industry to voluntarily ramp down reliance on such crucial medicines. True, the FDA’s policy, which was first released in 2012, contained a “three-year time frame for voluntary phase-in.” One might have hoped, however, that by 2014, the needle would point downward, not implacably upward.

Note, too, that the last time the FDA saw fit to release numbers on human antibiotic use, in 2011, the total stood at about 3.3 million kilograms. The chart below tells us that farms now use nearly 9.5 million kilograms—nearly three times as much. The news comes in the wake of warnings from the American Academy of Pediatrics, the World Health Organization, and the Centers for Disease Control and Prevention that the meat industry’s drug habit contributes to a growing crisis in antibiotic-resistant pathogens that kill 23,000 people each year in the United States and 700,000 globally. Then there was the recent news that in China—which has patterned its meat industry on the antibiotic-ravenous US model—a strain of E. coli had evolved on hog farms that can resist a potent antibiotic called colistin, considered a last resort for pathogens that can resist all other drugs.

Here are the numbers: 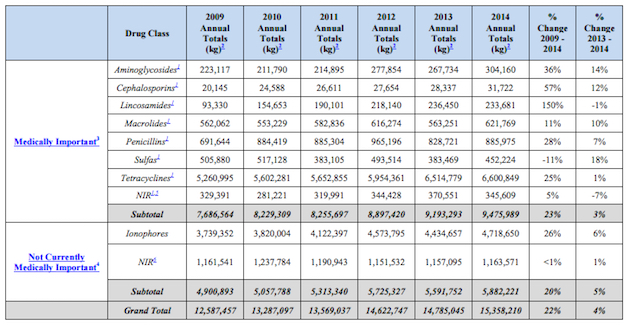